March of the Youth Against Impunity on #12M at 10:00am in Caracas

"Today I was hit with a rock in the back, a helmet in my nose. I swallowed tear-gas, Carried the kid who died, and what did you do?" - Robert Redman, age 31 over twitter on February 12, 2014 shortly before he was shot and killed.
March 12, 2014 marks one month since the Maduro regime began shooting students in the head who dared to nonviolently protest the lack of security, food shortages, and long lines for basic necessities in Venezuela. Over the past month 23 have been killed in the protests, hundreds injured and more than a thousand detained.  Many youths have also been tortured and there is one documented case of a young detainee anally raped with an assault rifle.

The students are calling for the Maduro regime to free all the detained students, end the criminalization of nonviolent protest, stop the torture and human rights violations, disarm the paramilitary groups, end the censorship of mass media and re-legitimize and renovate public powers. 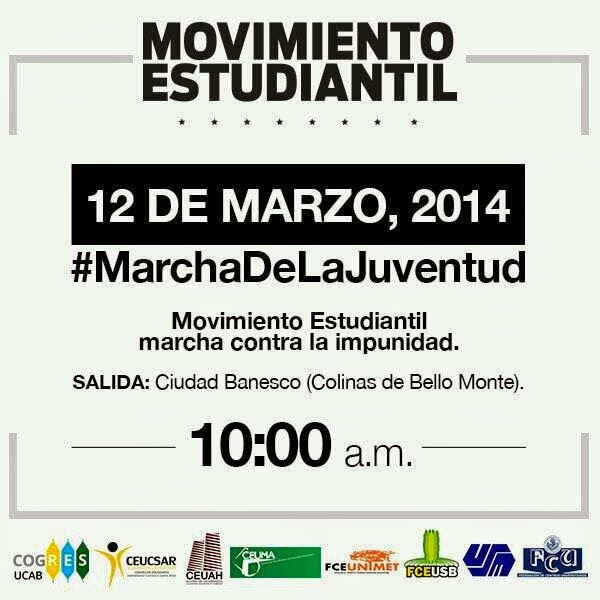 The student movement has called for a March of the Youth Against Impunity at 10:00am on March 12, 2014 and the gathering point is Ciudad Banesco (Colinas de Bello Monte) from there the students will march to the office of the Government's Ombudsman otherwise known as "The People's Defender" who on March 8, 2014 tried to downplay the torture of students. 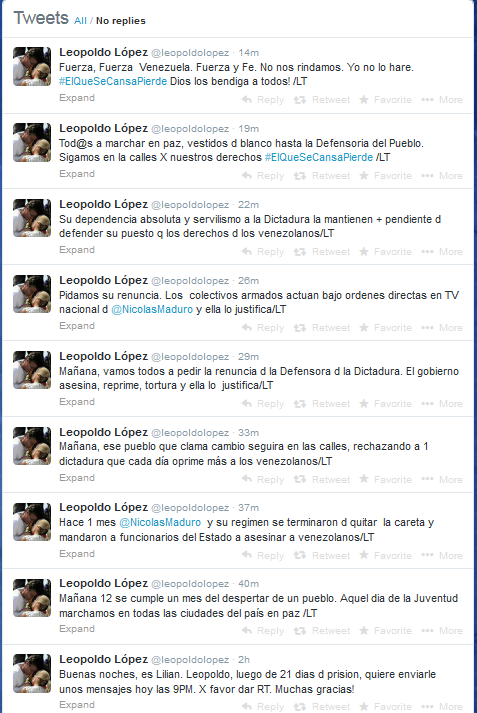 Leopoldo López Mendoza after 21 days in prison sent the following messages over twitter beginning at 9pm Caracas time on March 11, 2014 backing the march and calling for the resignation of the Ombudsman:


Tomorrow the 12th marks one month since the awakening of a people. That Youth day we marched in cities across the country in peace.

One month ago Nicolas Maduro and his regime finished taking off their mask and sent functionaries to assassinate Venezuelans.

Tomorrow, that people that calls for change will continue in the streets, rejecting a dictatorship oppressing each day more Venezuelans.

Tomorrow, lets all demand the resignation of the dictatorship's Ombudsman. The government murders, represses, tortures and she justifies it.

Her utter dependence and servility to the dictatorship keep her more focused on defending her post than the rights of Venezuelans.

All to march in peace, wearing white to the Ombudsman. Let us remain in the streets for our rights. #HeWhoTiresLoses

Strength, Strength Venezuela. Strength and Faith Let us not surrender. I will not. #WhoTiresLoses God bless you all!

Need some background information on whats been happening in Venezuela over the past month? Then visit here. Below images from the march today.