Mother remains on hunger strike in Cuba after 14 days 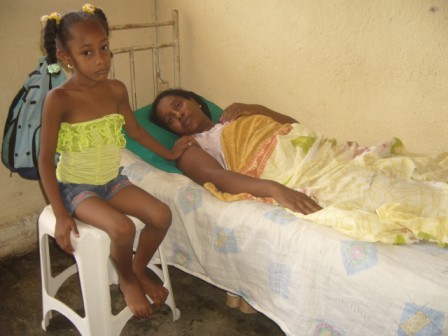 You live in a police state under a one party dictatorship in which government agents operate with complete impunity. The last time you were detained the secret police and their agents spent hours describing in detail how they would brutally rape your 5 year old. What would you do? What could you do?

Damaris Moya Portieles has been on hunger strike for the past 14 days demanding justice. She began the hunger strike on June 3, 2012.  She is protesting the rape threat against her six-year old daughter made by Castro regime agents. Now the dictatorship threatens to prosecute Damaris for not sending her daughter to school. This despite the fact that she fears to  send her child there while the Cuban regime agents that threatened to rape her daughter have not been held accountable. Its been more than month since the threats were made.


A mother's plea for her daughter calls for solidarity

On Sunday, June 17 in a video posted on youtube her mother, Bárbara Moya Portieles,  made an impassioned plea for help and solidarity from the international community for her daughter's life explaining that she is fearful for her daughter and knows that State Security oversaw the deaths on hunger strike of Orlando Zapata Tamayo and Wilman Villar Mendoza and will do the same with Damaris.

The Inter American Commission on Human Rights on June 12, 2012 released a precautionary measure for  Damaris Moya Portieles and her six-year-old daughter Lázara Contreras Moya.  It calls for taking the necessary measures to protect the life and physical integrity of the mother and daughter while at the same time calling for an investigation.

At the Senate Foreign Relations Committee hearing on June 7, 2012 Jorge Garcia Perez "Antunez" reported that Ms. Damaris Moya Portieles is on a hunger strike because the political police threatened to sexually abuse and rape her six-year-old daughter Lázara Contreras Moya.


On May 3, 2012 the Cuban Democratic Directorate published the following:

Human rights activist and member of the Rosa Parks Movement for Civil Rights, Damaris Moya Portieles, denounced on the morning of Thursday, May 3rd 2012 that in addition to having been victim of a violent arrest along with other dissidents during the previous Wednesday night, State Security and political police agents threatened to rape her 5 year old daughter.
According to Portieles, the main culprit of this threat was the State Security agent Eric Francis Aquino Yera. “The worst part of the entire night of my detention was when State Security officials and penal guards started to shout insults at me, among them saying that my 5 year old daughter, Lazara Contreras Moya, was going to be raped”, said Moya Portieles upon being released, “They told me, ‘Damaris, we are going to rape your daughter’. I cannot repeat the very cruel words they used, but they told me: ‘We are going to stick a penis up the behind of your daughter’,‘Your little girl is skinny, we can easily crack her’ and ‘We are going to rape her whether it be by the back or by the front’.

This is the most horrible thing that a mother could hear about one of her children”, she affirmed. Upon being released at around 11:00am, the first thing that Moya Portieles did was to head to the school where her daughter studies and took her home. The activist explained that she feels lots of fear, not for her, but for her child. For this reason, Moya made a decision to not allow her daughter to go to school until the repressor, Eric Francis Aquino Yera, is taken before a tribunal and faces charges for threatening to rape a minor.

Damaris Moya and her husband explained that they were on their way to the Public Prosecutors Office of Santa Clara to present their demands and complaints, and that they would later travel to the capital- Havana- to complete the rest of the denouncement process, despite the fact that both dissidents feel that such efforts will be in vain.