Some good news for a change.

Ten successive hostile amendments to resolution protecting civil society were defeated by vote on the final day of the 27th Human Rights Council session. During the adoption of the resolution Germany highlighted the right to funding for civil society.  This was a defeat for the dictatorship in Cuba that sought to curtail civil society participation during the 27th session itself with two egregious examples in the general debate on item 3 and later the same day in the general debate on item 4. 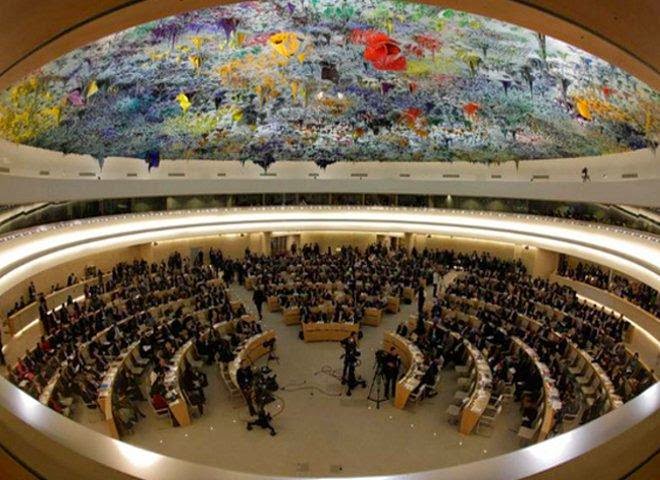 Below is the text of the draft resolution protecting civil society that was adopted by consensus.

The Human Rights Council,
Guided by the purposes and principles of the Charter of the United Nations,
Guided also by the Universal Declaration of Human Rights, the Vienna Declaration and Programme of Action, the International Covenants on Human Rights, and all other relevant instruments,

Recalling the Declaration on the Right and Responsibility of Individuals, Groups and Organs of Society to Promote and Protect Universally Recognized Human Rights and Fundamental Freedoms,

Recalling also all Human Rights Council resolutions relevant to creating and maintaining civil society space, inter alia, resolutions 12/16 of 2 October 2009, on freedom of opinion and expression, 21/16 of 27 September 2012, on the rights to freedom of peaceful assembly and of association, 22/6 of 21 March 2013, on protecting human rights defenders, 24/8 of 26 September 2013 on equal political participation, 24/21 of 27 September 2013 on civil society space: creating and maintaining, in law and in practice, a safe and enabling environment, 24/24 of 27 September 2013, on cooperation with the United Nations, its representatives and mechanisms in the field of human rights, 25/38 of 28 March 2014, on the promotion and protection of human rights in the context of peaceful protests, and 26/13 of 26 June 2014 on the promotion, protection and enjoyment of human rights on the Internet,

Recognizing the important role of civil society at the local, national, regional and international levels, and that civil society facilitates the achievement of the purposes and principles of the United Nations,

Reaffirming that special emphasis should be given to measures to assist in the strengthening of a pluralistic civil society, including through the strengthening of the rule of law, social and economic development, the promotion of the right to freedom of expression, online and offline, including artistic expression and creativity, access to information, the rights of peaceful assembly and freedom of association, including the right and ability to solicit, receive and utilize resources, and the administration of justice, and to the real and effective participation of the people in the decision-making processes,

Recognizing the crucial importance of the active involvement of civil society, at all levels, in processes of governance and in promoting good governance, including through transparency and accountability, at all levels, which is indispensable for building peaceful, prosperous and democratic societies,

Recognizing also that creating and maintaining a safe and enabling environment in which civil society can operate free from hindrance and insecurity assists States in fulfilling their existing international human rights obligations and commitments, without which equality, accountability and the rule of law are severely weakened,

Mindful that domestic legal and administrative provisions and their application should facilitate, promote and protect an independent, diverse and pluralistic civil society, and in this regard strongly rejecting all threats, attacks, reprisals and acts of intimidation against civil society actors, and underscoring that States should investigate any such alleged acts, ensure accountability and effective remedies, and take steps to prevent any further such threats, attacks, reprisals or acts of intimidation,

Underscoring that the legal framework within which civil society operates is that of national legislation consistent with the Charter of the United Nations and international human rights law,

Deeply concerned that, in some instances, domestic legal and administrative provisions, such as national security and counter-terrorism legislation, and other measures, such as provisions on funding to civil society, have sought to or have been misused to hinder the work and endanger the safety of civil society in a manner contrary to international law, and recognizing the urgent need to prevent and stop the use of such provisions, and to review and, where necessary, amend any relevant provisions in order to ensure compliance with international human rights law and, as appropriate, international humanitarian law,

Welcoming the recent enactment by some States of national legislation and policies to facilitate, promote and protect civil society space consistent with international human rights law, and looking forward to their effective implementation,

1. Welcomes the holding on 11 March 2014 of the panel discussion on the importance of the promotion and protection of civil society space and the summary report thereof;

2. Reminds States of their obligation to respect and fully protect the civil, political, economic, social and cultural rights of all individuals, inter alia, the rights to freedom of expression and opinion and to assemble peacefully and associate freely, online as well as offline, including for persons espousing minority or dissenting views or beliefs, and that respect for all such rights, in relation to civil society, contributes to addressing and resolving challenges and issues that are important to society, such as addressing financial and economic crises, responding to public health crises, responding to humanitarian crises, including in the context of armed conflict, promoting the rule of law and accountability, achieving transitional justice goals, protecting the environment, realizing the right to development, empowering persons belonging to minorities and vulnerable groups, combating racism and racial discrimination, supporting crime prevention, countering corruption, promoting corporate social responsibility and accountability, combating human trafficking, empowering women and youth, advancing social justice and consumer protection, and the realization of all human rights;

3. Urges States to create and maintain, in law and in practice, a safe and enabling environment in which civil society can operate free from hindrance and insecurity;

4. Emphasizes the importance of civil society space for empowering persons belonging to minorities and vulnerable groups, as well as persons espousing minority or dissenting views or beliefs, and in that regard calls upon States to ensure that legislation, policies and practices do not undermine the enjoyment of their human rights or the activities of civil society in defending their rights;

5. Also emphasizes the important role of artistic expression and creativity in the development of society and, accordingly, the importance of a safe and enabling environment for civil society in that regard, in line with article 19 of the International Covenant on Civil and Political Rights;

6. Urges States to acknowledge publicly the important and legitimate role of civil society in the promotion of human rights, democracy and the rule of law;

7. Also urges States to engage with civil society to enable it to participate in the public debate on decisions that would contribute to the promotion and protection of human rights and the rule of law, and of any other relevant decisions;

8. Stresses in particular the valuable contribution of civil society in providing input to States on the potential implications of legislation, when such legislation is being developed, debated, implemented or reviewed;

9. Urges States to ensure access to justice, accountability and end impunity for human rights violations and abuses against civil society actors, including by putting in place, and where necessary reviewing and amending, relevant laws, policies, institutions and mechanisms to create and maintain a safe and enabling environment in which civil society can operate free from hindrance and insecurity;

10. Calls upon States to ensure that provisions on funding to civil society are in compliance with their international human rights obligations and commitments and are not misused to hinder the work or endanger the safety of civil society actors, and underlines the importance of the right and ability to solicit, receive and utilize resources for its work;

11. Urges all non-State actors to respect all human rights and not to undermine the capacity of civil society to operate free from hindrance and insecurity;

12. Emphasizes the essential role of civil society in subregional, regional and international organizations, including in support of the organizations’ work, and in sharing experience and expertise through effective participation in meetings in accordance with relevant rules and modalities, and in this regard reaffirms the right of everyone, individually and in association with others, to unhindered access to and communication with subregional, regional and international bodies, in particular the United Nations, its representatives and mechanisms;

13. Recognizes the valuable contribution of national, subregional, regional and international human rights mechanisms and bodies, including the universal periodic review and special procedures of the Human Rights Council, the treaty bodies and national human rights institutions, to the promotion and protection of civil society space, and encourages these mechanisms in the framework of their existing mandates to continue to address relevant aspects of civil society space;

14. Welcomes the work of the Office of the United Nations High Commissioner for Human Rights to promote and protect civil society space, including its work on widening the democratic space, and invites it to continue efforts in this regard;

15. Requests the High Commissioner to prepare a compilation of practical recommendations for the creation and maintenance of a safe and enabling environment for civil society, based on good practices and lessons learned, and in this regard to continue to engage with and seek the views of States, the special procedures of the Human Rights Council, the treaty bodies, relevant United Nations bodies and agencies, regional human rights mechanisms, national human rights institutions, civil society and other stakeholders, and to submit the compilation to the Human Rights Council at its thirty-second session;

16. Decides to remain seized of the matter.