Nicolás Maduro ‏celebrates and embraces the legacy of Mao Ze Dong, the greatest mass murderer of the 20th century

Venezuela since 1999 with the rise of Hugo Chavez has been on the path to Socialism of the 21st Century. Socialism of the 21st Century in practice looks a lot like Communism of the 20th Century. Chavez died in 2013 and was replaced in the Venezuelan Presidency by Nicolas Maduro who continued the project of turning Venezuela into a communist dictatorship. On September 9, 2018 over twitter Maduro praised the late Mao Ze Dong and embraced his legacy declaring "We shall prevail." 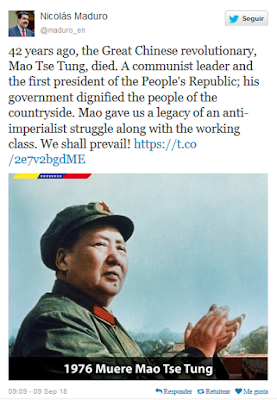 Mao Ze Dong "dignified the people of the countryside" by killing an estimated 45 million of them in his communist project throughout his dictatorial rule.  Ideas have consequences when they are turned into action and that is what we are witnessing in Venezuela today under the Maduro regime which has embraced the murderous legacy of the greatest mass murderer of the 20th century.

Human Rights Watch reports that "over 2.3 million Venezuelans out of an estimated 32 million total population have left their country since 2014, according to the UN."