Not one more year of dictatorship in Cuba: Let this be the year of liberation

Let them be heard


At the same time the lackeys of the dictatorship are clear. Sixty and more years of dictatorship is what they desire, while insulting those who dissent as ill born. This is what the "president"of Cuba Miguel Diaz Canel tweeted on December 28, 2018.

Yesterday morning the tweet included an attack claiming that there is no lack of the "ill born by error in Cuba, who can be worse than the enemy that attacks her." Ironically, it better describes the last sixty years of the Castro regime attacking a free Cuba. 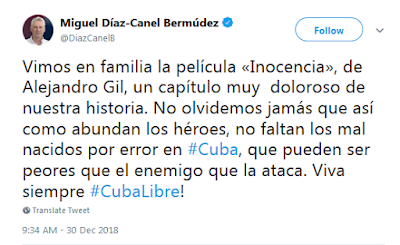 Let the voices of the democratic resistance and the communist dictatorship be heard, and in the battle of ideas the Castro regime will lose. This is why they outlaw all speech that dissents from the official line, and lock up those who exercise their fundamental human rights.

Those who think that the regime will gradually democratize should wake up. The words of Diaz-Canel are clear and so are the actions of the Castro regime over the past 60 years.

Email ThisBlogThis!Share to TwitterShare to FacebookShare to Pinterest
Labels: Cuba, Miguel Diaz-Canel, Ni1Más, Not one more