#MiamiProtests Why was a Sandinista Flag on display at a protest for George Floyd?

"Injustice anywhere is a threat to justice everywhere. We are caught in an inescapable network of mutuality, tied in a single garment of destiny. Whatever affects one directly, affects all indirectly. Never again can we afford to live with the narrow, provincial 'outside agitator' idea." - Martin Luther King Jr. , Letter from a Birmingham Jail, April 16, 1963

I have no doubt that white supremacists and Neo-Nazis are exploiting the civil unrest in the United States, targeting the police who they hate, and making a bad situation worse, but they are not the only ones. Antifa and other hard Left elements are also doing the same introducing symbols and rhetoric that take away from the cause of justice for George Floyd. 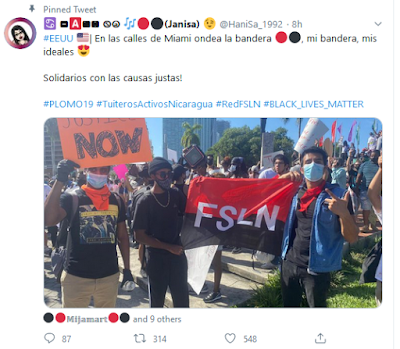 In the Miami Protest on May 30, 2020 demanding justice for George Floyd a picture was taken of two individuals holding up the black and red flag of the "National Sandinista Liberation Front" (FSLN) in the midst of the protest, and it was posted on Twitter by a self-described militant of the Sandinista cause.

If we believe, as Reverend King did, that "injustice anywhere is a threat to justice everywhere" then these individuals need to be called out for carrying a banner, representing Daniel Ortega, a dictator who uses his security forces to murder, torture and rape opponents in Nicaragua to maintain power. Ortega has a lot more in common with Derek Chauvin, and has been placing his knee on the necks of Nicaraguans collectively for years jailing and killing many.

Nicaraguan mothers have been killed by Daniel Ortega's repressive forces for demanding justice for their murdered children. How can people of good will associate and promote such a regime? Two years ago on Mother's Day in Nicaragua, that was celebrated on May 30, 2018, a peaceful protest march was carried out in solidarity and mourning with mothers whose children had been killed in previous weeks by the Sandinistas. The mothers carried photos of their murdered children. During the march Ortega's henchman killed 16 more Nicaraguans and nearly another 200 were injured.

According to a 2018 United Nations report, many of those arrested "were subjected to extrajudicial killings, forced disappearances, rape with rifles, and torture with Taser guns, barbed wire, tubes and attempted strangulation." Death squads are operating in Nicaragua today.

Why would advocates for justice for George Floyd associate with people carrying such a loathsome symbol?

Should they not show solidarity for the victims of Daniel Ortega and not march together with his supporters?

What would George Floyd do?