They can either kill us, put us in jail or release them. We will never stop marching no matter what happens." - Laura Inés Pollán Toledo (2010)

Ten years ago today, Cuban opposition leader and human rights defender Laura Pollán died under circumstances that Cuban dissident and medical doctor Oscar Elias Biscet described as "death by purposeful medical neglect."
Laura Inés Pollán Toledo, a courageous woman spoke truth to power and protested in the streets of Cuba demanding an amnesty for Cuban political prisoners. She had been a school teacher, before her husband was jailed for his independent journalism in 2003 along with more than 75 other civil society members. Laura was greatly admired both inside and outside of the island.

But when one opposes the regime in Cuba not only is their physical life in danger, but their reputation is systematically slandered. The dictatorship claimed that she was a stateless "traitor." She became ill and died within the space of a week under circumstances that raise the question of foul play by Castro's secret police. Following her death the official media of the dictatorship began a slander campaign asserting that she was a common criminal.
Following brutal repression, in an effort to prevent them from marching through the streets of Havana, Laura Pollan directly and nonviolently challenged the regime declaring, "we will never give up our protest. The authorities have three options — free our husbands, imprison us or kill us."

Unfortunately beginning in 2010 a new and deadlier pattern of oppression presented itself with the extrajudicial death of Orlando Zapata Tamayo.

Laura Pollán's "criminal" behavior was to start the Ladies in White movement after the Black Cuban Spring of 2003 and nonviolently challenged the Castro regime in the streets of Havana at the beginning, and eventually across the island. Laura reached out to the wives, mothers, sisters, and daughters of the 75 prisoners of conscience jailed in March of 2003 along with her husband and they carried out a sustained nonviolent campaign that after nine years obtained the freedom of their loved ones.
Since she did not dissolve the Ladies in White when her husband returned home because she recognized that the laws had not changed, and that political prisoners remained behind bars and that she would continue her human rights activism, the Castro regime did away with her on October 14, 2011.
Today, the current leader of the Ladies in White, Berta Soler, paid homage to her predecessor over FaceBook while calling out and holding responsible the Castro regime for Laura's death.

Tenth anniversary of the physical loss of Laura Pollan Toledo. The Fidel Castro regime murdered Laura Pollan, they thought to silence her, but they did not succeed, she remains high in our esteem and is among us present at every step of the Ladies in White, following her legacy.
Example of a woman, loving, brave, intelligent, audacious, teacher, warrior, for that and much more we say: LAURA POLLAN LIVES Laura is in our hearts Ladies in White we pay tribute and homage to: Laura Pollan Toledo. 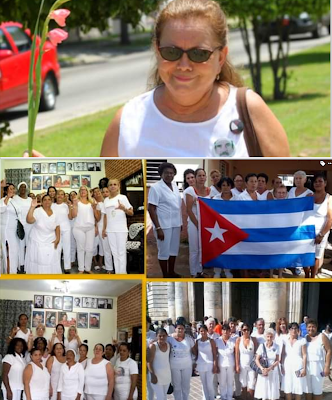 Let us remember that Laura put into action over eight years in Cuba nonviolent resistance to tyranny.

"They tried to silence 75 voices, but now there are more than 75 voices shouting to the world the injustices the government has committed." (2004) "We fight for the freedom of our husbands, the union of our families. We love our men." (2005)

"They can either kill us, put us in jail or release them. We will never stop marching no matter what happens." (2010) "We are going to continue. We are fighting for freedom and human rights.” (September 24, 2011)

“If we must give our own lives in pursuit of the freedom of our Cuba that it be what God wants.” (September 24, 2011)
"We are not going to stop. If you have imprisoned our sisters thinking that we would give up, they are mistaken. We are very united (...) all the women's movements are very close." (October 2, 2011)
"My life has changed a lot, now I have learned to love the country much more, the prisoners, the humanity. That's how I have so much work, that I don't have much time to think about myself, what really satisfies me, in short, I owe myself to other more important tasks. Now I understand much more, before I could not understand these things, you have to live and feel them to be able to dedicate soul heart and life to this beautiful cause." (2011)

The regime in Cuba is the most misogynist government in all of Latin America. Women who speak out and exercise their fundamental rights are regularly slandered, physically assaulted and sometimes die under suspicious circumstances as Laura did ten years ago today.
Posted by John Suarez at 7:28 PM