Today is Yom HaShoah, Israel’s Holocaust Remembrance Day, when we honor the memories of the six million Jews who perished during the Holocaust. We must all remain vigilant in our efforts to reject antisemitism in all of its forms and say NEVER AGAIN! #HolocaustRemembranceDay pic.twitter.com/59nMqEFNmY

We must never forget what happened and remain vigilant now and in the future to battle against the mass destruction of innocent human beings.  Polls in 2020 showed that new generations are ignorant of the Holocaust are deeply troubling. Yom HaShoah, Israel’s Holocaust Remembrance Day, remembers the six million Jewish people murdered in the Nazi Holocaust, and continuing forms of antisemitism in the world today.

Equally troubling today is a tyrant that wages aggressive war and commits atrocities to “de-Nazify” a democratic country led by a Jewish president. 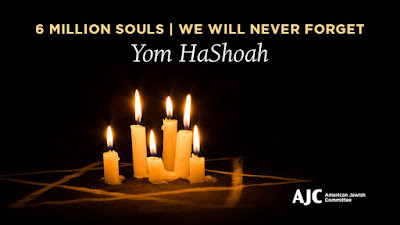 Vladimir Putin would like the world to forget the Soviet Union's historic collaboration with Nazis in starting WW2, and Moscow's demonizing of the Jewish people through to the present day, but we owe it to the victims to remember the full history. Juliana Geran Pilon in her March 11, 2022 OpEd "Putin’s ‘De-Nazification’ Claim Began With Marx and Stalin: Anti-Semitic myths have long been a staple of communist ideology and Soviet disinformation" summarized and sourced this history in this excerpt.

Still, as the historian Robert S. Wistrich wrote, “it was only after 1967 that antisemitism and anti-Zionism would assume a truly systematic and organized character. . . . In place of the relentless Nazi myth about ‘Jewish Bolshevism,’ the Soviet Communists began to fabricate the equally mendacious thesis of ‘Jewish Nazism.’ ”

The idea of a Zionist-imperialist-fascist-American conspiracy culminated in the infamous “Zionism is racism” resolution, passed in 1975 by a majority of United Nations member states. By the time the resolution was repealed in 1991, it had done significant damage. Osama bin Laden believed the fantasies of the “Protocols,” Mr. Wistrich wrote in his book “A Lethal Obsession.” The jihadist’s conviction that the world is run by a capitalist, Jewish cabal explains why the 9/11 suicide hijackers expected the World Trade Center to be full of Jews.

Placed in its historical context, this myth of antifascism, anti-Nazism and anti-Zionism is far more than rhetoric.

As Santayana observed, those who forget history are doomed to repeat it. This is why we must remember and say never again.

“Monsters exist, but they are too few in number to be truly dangerous. More dangerous are the common men, the functionaries ready to believe and to act without asking questions.”