Peace Without Borders: An Assessment of the Concert 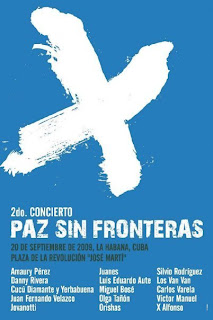 Peace Without Borders:
An Assessment of the Concert


"Only oppression should fear the full exercise of freedom."
Jose Marti y Perez

A little over a month ago I outlined my plan with regards to the Peace Without Borders concert in Havana and that was to watch or listen to the September 20th concert get feedback from people who attended the concert and from members of the democratic opposition then draw conclusions about the event.

I ended up at the University of Miami with members of Raices, UMCAUSA, and the Free Cuba Foundation watching a live feed of the concert projected onto a large screen with press in attendance.

The Concert
Let me begin by warning the reader: I'm a human rights activist not a culture or music critic. These are my personal impressions. The first two hours of the concert where by and large a drag. Victor Manuel, Danny Rivera and especially Cucu Diamantes, a Cuban exile from New York, did not distinguish themselves at all on stage. It was two hours into the concert when I was interviewed and asked about my feelings about the concert and I answered truthfully: bored.

Then Orishas came on and the concert finally took off with a rousing set of music.

They ended their set and introduced Juanes who began the most powerful set content wise of the concert. The words and images that impacted me the most were during "Nada Particular" a duet with the Spaniard Miguel Bose. During this song at the Concert in Havana a young Cuban with a flag is invited on stage by Juanes at 6:17 as they sang Libertad! in the video and 12 seconds later is taken away by what appears to be a plainclothes state security agent.


"Nada Particular" has lyrics that translate "Give me an island in the middle of the sea and call her Liberty. Sing strong brother. Tell me that the wind will not sink her. That my history will not bring pain that my hands will work for peace and that if I die it is love that kills me":


The other song that Cubans on the island read a lot into was Sueños which Juanes dedicated to those kidnapped in Colombia and "to all those denied their freedom wherever they are."

The lyrics here are equally applicable to the Cuban reality "I dream of liberty for those kidnapped in the middle of the jungle and I dream of peace for my people bled dry and an end to this unjust war":

Silvio Rodriguez who signed a petition justifying the regime’s imprisonment of 75 nonviolent dissidents and the execution of three young Afro-Cubans who tried to flee to the United States back in the spring of 2003 sang a stirring redition of "Ojala" a song that I understand he had not sung in 20-years. A great musician but an unrepentant apologist for a regime that has scores of prisoners of conscience.

I thought Carlos Varela also put on a good show in his appearance with Miguel Bose earlier in the show where they sang "Muro" and later on with "25 mil mentiras sobre la verdad" and "Colgado del Cielo."

I know I'm leaving out a lot but these were the sounds and images that I thought were highlights and my impressions of the concert.

Now I am going to speculate - which is always dangerous to the speculator - that the dictatorship in their negotiations with Juanes pressured him successfully into not raising the issue of Cuba's prisoners of conscience - which despite what most may believe is not a political issue - a human rights issue.

Nevertheless the regime figured it could not manipulate the concert much beyond effective crowd control to ensure that nothing happened at the Plaza of the Revolution. Therefore it had to focus on impacting the context in which the concert was carried out. Selectively editing interviews from broadcasts on Miami's local television and most probably having one of their agents send a death threat to Juanes by Twitter and the scenario was set for their propaganda offensive with the Cuban populace and the international movement. Pioneered by Soviet filmmaker Sergei Eisenstein montage was perfected by Leni Riefenstahl and one can see it at work in this Cuban propaganda production.

The goal is simple present the Cuban government as reasonable and their adversaries in the worse light with editing that appeals to raw emotion to impact the viewer. This clip demonstrates this technique. The reality is that there has been a wide ranging debate with individuals and organizations pro and con as well as neutral on the subject. Carlos Alberto Montaner who is widely demonized by the regime came out and defended and supported the Peace Without Borders Concert. Basically, the normal state of affairs in a democracy including extremists that cross the line of good taste. Nobody ever said free expression was going to always be pretty. At the same time those who burned or crushed CDs and other materials were widely repudiated by the exile community. The day after the concert an article appeared in the Science section of the New York Times that Fidel Castro had called on the Soviets to attack the United States with a nuclear first strike in the early 1980s. No amount of spin can alter the factual and detestable legacy of the dictatorship.

Let us not overplay or underplay the importance of this concert as some have done. When Pope John Paul II went to Cuba he negotiated the return of Christmas to the Cuban people as a national holiday after a 28 year absence and handed Fidel Castro a list of political prisoners he wanted released. Oswaldo Paya and members of All United (Todos Unidos) gathered more than 25,000 signatures from Cuban nationals who provided their home address and identification number to a petition demanding human rights and reform of the current system which forced the Cuban government to change its constitution. Cuban musicians singing in Cuba have said a lot more in their music such as Frank Delgado, Porno para Ricardo, and Los Aldeanos, just to name a few, which is why they were vetoed from playing in the Peace Without Borders concert, and in the case of Gorki from Porno para Ricardo led to more than two years in prison for not renouncing his anti-government statements. Also calling out "Cuba Libre" doesn't mean much in the Cuban context when the dictatorship has launched an operation titled "Viva Cuba Libre." It may a mean a lot to people in Miami, but in Cuba it is a phrase the regime has used.

I never thought a pop music festival was going to bring down the regime, and I did believe that the dictatorship would try to manipulate the situation but I did hope that one of the artists explicitly calling for the freedom of Cuba's Amnesty International prisoners of conscience, as many relatives of the prisoners had requested might have improved their conditions and perhaps led to some being released. Something that the Ladies in White ask for weekly and that Berta Soler went to the Revolution Plaza at one point to demand that her husband Angel Moya be given proper medical care. who incidentally turned 45 on the day of the concert September 20, 2009 (Angel's sixth one behind bars). It would not have caused the government to fall nor cost lives but perhaps saved a few. The concert is over now. Cubans on and off the island got to forget their worries for a few hours and listen to music; some positive words on changing hate for love; freedom; and change but then back to the same grind. Yet despite the disappointments outlined above and the repression visited on many the concert was worth it. Why? Because it puts Cuba under an international spotlight and it is an opportunity to highlight the human rights challenges faced and to speak up for those prisoners of conscience suffering there. If not done by the musicians themselves then by human rights activists and the prisoner's families which can only help their plight.

However the statements made by Juanes that the concert had achieved its goal of helping to bring people together was incorrect. Also his statement that: "This event reaffirmed the necessity for all of us to unite... The government of the U.S. has to change and Cuba has to change too but this show of love and peace and affection is so important for both sides," is either a shallow or a simple misunderstanding of the Cuban situation. The US has changed since 2001, ironically during the Bush Administration, there has been more than $2.8 billion dollars in trade with the Cuban government. For years (including during George W. Bush's administration) and until the present date there have been joint military exercises with the US and Cuban military. The Cuban government's response: more repression and a massive crackdown in 2003 responding to the petition of tens of thousands of Cubans for change with the Varela Project.

There is no division between Cubans on the island and in exile that requires a mediator to bring them together is if this where Northern Ireland. There is a constant influx of tens of thousands of Cubans from the island thousands strong every year. The division is between the Cuban people and the dictatorship that has systematically denied Cubans their rights for 50 years and shows no signs of changing. The systematic denial of human rights in Cuba is structural violence against all Cubans by the totalitarian power structure on the island. When someone like Dr. Oscar Elias Biscet, a Regis Iglesias, or Jose Daniel Ferrer Garcia exercise the power of the powerless in and attempt to end this violence and bring a real peace they suffer beatings and imprisonment. This is the source of the conflict in Cuba not a misunderstanding between the United States and Cuba or between Cuban exiles and Cubans on the island. The conflict that needs to be resolved is between the totalitarian dictatorship and the violence it visits on all Cubans.