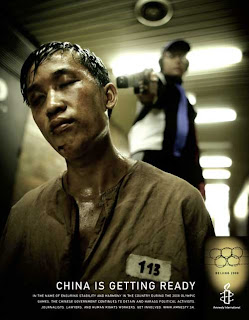 
"Even a purely moral act that has no hope of any immediate and visible political effect can gradually and indirectly, over time, gain in political significance." -Vaclav Havel

The United States normalized relations with China in 1978. A decade later on June 4, 1989 the Chinese dictatorship engaged in a massive crackdown killing thousands of Chinese students and workers who had been non-violently protesting in and outside of Tiananmen Square. One month later on July 4, 1989 George H.W. Bush sent a secret high level delegation to meet with the Chinese regime and join with them in celebrating American Independence while downplaying any pro-forma criticisms made by the Administration. Candidate Bill Clinton would critique this de-linkage of human rights and commercial interests only to continue the practice during his own administration. This reached a symbolic low point in 1996 when the General responsible for the 1989 massacre was received at the White House with an honor guard.

Both the Bush and Clinton Administrations placed human rights on the backburner in exchange for a realpolitik policy. Human Rights Watch in their 1989 report outlines the Bush Administration’s approach towards downplaying the Tiananmen Square massacre: "The Bush administration, however, has raised hypocrisy to new heights by coupling public expressions of concern with behind-the-scenes efforts to patch things up with those responsible for the slaughter and arrests following the June 4 crackdown. The symbolism of a top-level U.S. delegation meeting in secret on the Fourth of July with the Chinese leadership who crushed the democracy movement, and again on International Human Rights Day, December 10, will stand as the hallmark of the Bush administration's human rights policy in 1989." (1)

In 1992 the Governor Bill Clinton said that he would use trade sanctions to put pressure on the Chinese to respect human rights, and then criticized "Mr. Bush's ambivalence about supporting democracy and his eagerness to befriend potentates and dictators."(2) Nevertheless President Clinton on December 9, 1996 hosted with full honors General Chi Haotian the man who on June 3-4, 1989 was in operational command of the Tiananmen crackdown. Congresswoman Nancy Pelosi, now Speaker Pelosi, challenged President Clinton explaining in great detail her objections:

My objection is not to the visit of Chinese Defense Minister General Chi Haotian, but to our country giving full military honors to the person who was in operational command over the Tiananmen Square massacre in 1989 and who directed the Chinese government's military threats against the Taiwanese people during their elections. At the same time that President Clinton will not meet with any of the Chinese dissidents or have an official meeting with His Holiness the Dalai Lama, he has an official meeting with the person who crushed and continues to crush dissent in China and Tibet.(3)

What do Chinese human rights activists have to say about the state of human rights in China today? Both Harry Wu and Wei Jingsheng have been recognized by the Robert F. Kennedy Memorial as Speak Truth to Power Defenders. Harry Wu offers a brief analysis of the overall human rights situation in China over the past five decades:

“Let me tell you a story of the three W’s: Wu, Wei, Wang Dan. I am the first "W." In 1957, while attending university in Beijing, I spoke out against the Soviet Union’s invasion of Hungary. For this I was labeled a "counterrevolutionary" and sentenced to life in the laogai, the Chinese term for gulag. Ultimately, I gave nineteen years of my life to that system. In 1979, the year I was released, the West was applauding China for opening up. Mao was dead, the Cultural Revolution was over, and it seemed that Deng Xiaoping would herald a new era for China. But that same year, the second "W," Wei Jingsheng, was imprisoned for expressing himself, for calling for the fifth modernization of democracy for China. In 1989, when I was in the United States and Wei was serving the tenth year of his sentence, another young man, Wang Dan, was imprisoned for his role in the student democracy movement. The Chinese government imprisoned each of us in three different decades for peacefully expressing our opinions; we all received second sentences in the 1990s. With respect to individual rights, not much has changed since 1957." (4)

Wei Jingsheng describes how the jailers used the policy of engagement to demoralize Chinese democrats: “The second time I was in jail, before I was officially given a fourteen-year sentence, some of my jailers said, "What’s the point of you fighting like this? Your so-called friends in the United States are very good friends with our leader. They are in a pact together. You are wasting your time." At the time I refused to believe them. But, now that I am outside, I am forced to believe because I have seen it with my own eyes.” (5)

Over the past twenty years since Tiananmen both the US government and private business have behaved in an atrocious manner with regards to the people of China colluding with China’s tyrants in covering up their gross and systematic human rights violations, in the case of Cisco, Google, and Microsoft assisting in erecting a wall of censorship denying Chinese nationals access to information and in the case of companies like Yahoo actively assisting in the targeting, arrest, and prosecution of non-violent dissidents using the internet. Since we can not trust government or business to do the right thing with regards to China then we must stand up in solidarity with the Chinese people and their desire to be free.(6)