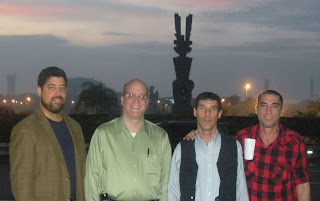 “Regardless of what political model you embrace, I have no doubt that in our time our future belongs to those who are willing to responsibly embrace pluralism, openness and freedom. Your choice is to act and survive, or to resist and crumble.”

Reflecting on the situation in Cuba were for more than 50 years one party and the Castro brothers have rejected pluralism, openness, and freedom in Cuba we can say that the Island is a material realization of the above statement. The dictatorship resists change and Cuba is crumbling both physically and spiritually.

Cuban democrats are struggling for pluralism, openness, and freedom using non-violent means in the face of a brutal and violent of regime. There are two recent examples that demonstrate the dictatorship's nature. The death of prisoner of conscience Orlando Zapata Tamayo on an 82 day water only hunger strike on February 23. Cuba’s Ladies in White in March 2010 observed the 7th anniversary of their loved one’s imprisonment with silent marches over seven days during which they were subjected to harassment, detentions by state security, and brutal beatings. Some of them suffered broken bones.

Nevertheless, the women continued to march over the seven days demonstrating their courage and commitment.

Recalling this reality, we ask for concrete actions to be taken.


We call on democrats from around the world to continue to demonstrate their solidarity with their Cuban brothers and sisters, and if they have not in the past to begin to do so.

We call on the dictatorship in Cuba to release all of Cuba’s political prisoners; apply international human rights standards into the law; end communist monopoly control of political life recognizing both opposition parties and independent civil society; and finally hold free and transparent elections with international monitors.