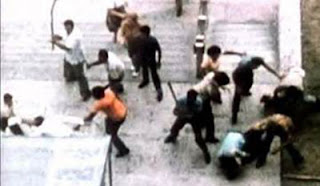 "I was caught because I was an illegal," explained a bicycle taxi driver as he gripped the rusted blue handle-bars of his vehicle in" ... "And because I'd been here several times before, I was deported back."

The bicyclist was not interviewed somewhere in Arizona, but in Cuba where even being a Cuban citizen does not permit you to live in your nation's capitol. Despite that Cuba's rubber stamp national assembly has passed a resolution denouncing Arizona's immigration law. The Cuban "legislators" failed to mention their own immigration & emigration laws. In 1997 the same national assembly passed a law Decree 217 which restricts migration to Havana from rural areas.

"The government deported tens of thousands of people or forcibly removed them from Havana to other parts of the island," said Daniel Wilkinson, America's deputy director at Human Rights Watch. "It's just one in a series of laws that place severe restrictions on Cubans [and] how they live, where they live, and where they work."

Also there appears to be a racial component with regards to who the police target and deport to their home province according to a CNN report:

The taxi driver said he believes when Havana police check IDs, they "like to pick on black people a little more."

This reality has led to Brazilian civil rights leader Abdias Nascimento and African Americans to speak out against the mistreatment of Cubans of African descent.

Yoani Sanchez, Claudia Cadelo, and many other Cubans have been denied exit permits to attend international conferences abroad. There are more extreme practices for Cuban nationals who attempt to enter and leave their own homeland. Cubans who left without permission were massacred as in the case of the July 13, 1994 "13 de Marzo" tugboat sinking. Please view the video below for more details:

This was not the first time that such an act was documented. On July 6, 1980 in Matanzas Bay near the Canimar River Cuban forces strafed, rammed, and sank a boat heading for Miami with 60 Cubans on board.

Nor can a Cuban who has left his homeland simply return even with a valid Cuban passport. Adrian Leiva returned for three months in 2008 and was deported when his visa expired. In Cuba, although a Cuban citizen you need a visa to re-enter your country. He tried to return in 2009 only to be turned away by Cuban government representatives at Miami International Airport. Adrian died in March 2010 under mysterious circumstances trying to return home to Cuba on a boat. Other Cuban nationals that traveled with him remain incarcerated by Cuban state security.

Mariel marked the first time socialist Cuba turned against itself. The government staged riots called actos de repudio -- street rallies in which neighbors turned against neighbors, harassing and tormenting those who wanted to leave the country. The victims were often pelted with rocks, tomatoes and eggs. Windows were shattered. Doors were knocked down. Some people were killed, dragged through the streets as trophies to intolerance and hate. Sometimes people trapped inside their homes chose to kill themselves rather than face their tormentors.

The video below contains images from the government mobs in 1980 beating and brutalizing Cubans who just wanted to emigrate.