Norwegian of Cuban descent on mother's side bitten by Cuban Consul in Oslo, Norway

The Cuban Consul's bite is worse than her bark 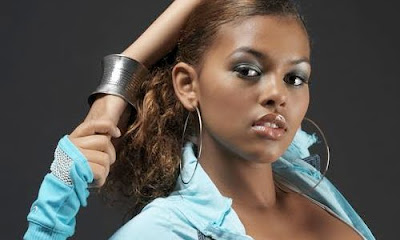 Norwegian media is reporting about a Cuban diplomat, Carmen Julia Guerra, insulting, threatening, and biting a young Norwegian woman, Alexandra Joner age 19 (pictured above), of Cuban descent on her mother's side that took place on May 22, 2010 outside of the Cuban embassy in Oslo during a non-violent demonstration in solidarity with the Ladies in White and in remembrance of Orlando Zapata Tamayo. There are even blog entries with colorful titles: Cuban diplomat does a Mike Tyson in Norway.and Beware of the dog...err... the Cuban diplomat. The main national newspaper in Norway, Aftenposten, has a photograph of the young girl with bite marks on her hand taken by Hans O. Torgersen. The photo is reproduced below. 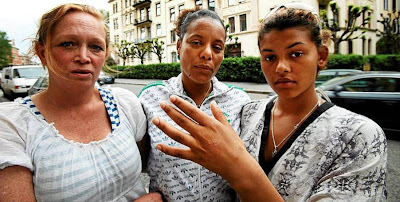 Now this is what happens to someone peacefully demonstrating in front of the Cuban embassy in a free country like Norway. Jan Tore Sanner, a Norwegian member of parliament, is asking that the Cuban diplomat who bit Alexandra be expelled from the Norway. In a face book post the member of parliament outlined his position:


The Cuban consul demonstrates that the regime has no respect for how to behave In an open and democratic society. In our country everyone have freedom of speech – it`s not acceptable that diplomats tries to stop a peaceful demonstration.

Considering this incident imagine what they do to Cubans inside of Cuba demonstrating peacefully in their own country. This reality is why Cuban human rights activists and dissidents need your solidarity, and why these seven women were out marching for the dissidents in Cuba when they encountered the intolerance and hatred of the Cuban diplomat. Below a photograph with a closer look at the bite marks on the hand. 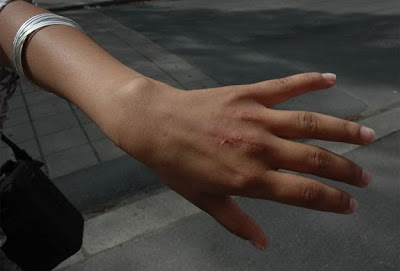 Below is a video that documents the insults, threats, and attempt by the "diplomat" to seize Alexandra Joner's camera. The video below shows what took place, and a written description is also available inside.

UPDATE: The incident has been picked up by the international news agency Agence France-Presse (AFP)

UPDATE #2: Chavista account of Oslo demonstration where attack took place seeks to portray a silent protest of 7 women as a failure in Radio Nacional de Venezuela

Update #4: Norwegian media now reporting that a formal complaint has been made and that the Norwegian Foreign Ministry is looking into it.

Update #5: Norway's TV2 reports that the Cuban ambassador has sent a letter and images accusing the 19 year old artist of attacking the Cuban Counsel.

Update #8: Mercopress offers a complete overview of where things stand on May 27, 2010: Cuban consul in Norway accused of “biting” demonstrator’s hand

Alexandra Joner, appears in the above video by Norwegian artist Laila Samuels with the title "Give it to me straight" which is what the Norwegian Foreign Ministry should demand of the Cuban ambassador.
Posted by John Suarez at 9:18 PM