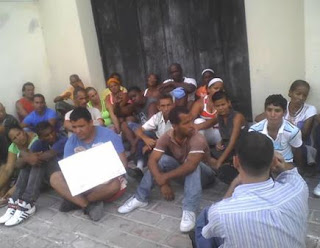 A total of 26 member of the Patriotic Union of Cuba (UNPACU), among them one of its leaders, former political prisoner Jose Daniel Ferrer Garcia, remain on hunger strike as a civic protest against the growing number of violent detentions of human rights activists and the increase of political prisoners. As of now, all the strikers hail from the Eastern region of the country.

The protest originated on Monday, April 15th, when a group of about 14 activists stood outside the Third Police Unit of Santiago de Cuba, demanding the release of dissident Luis Enrique Lozada, of UNPACU, who has been detained and on hunger strike in the mentioned unit since Tuesday, April 9th. His underage son, Enrique Lozada, as well as other relatives and brothers-in-struggle decided to carry out their own hunger strikes in solidarity.

On Tuesday, April 16th, a total of 24 dissidents of the same pro-freedom organization took the protest to the Cespedes Park of Santiago de Cuba, in front of the Cathedral of Santiago and the Communist Party of that area. Here is the video, courtesy of UNPACU, of the protest. One can also see various violent arrests of peaceful dissidents who tried to join the demonstration:


During the night of the 16th, monsignor Dionisio Garcia Ibanez, of Santiago, personally told Jose Daniel Ferrer that he would intercede for them, so that the political detainees, like Luis Enrique Lozada, be liberated.

Ferrer and the other hunger strikers returned to their homes, but they are still on strike. In this video, they explain their reasoning:


This 18th of April the UNPACU strikers are as follows: 11 in Palmarito de Cauto, 6 in San Luis and 9 in Santiago de Cuba, with a total of 26.

Meanwhile, on Twitter the young activist Anyer Antonio Blanco Rodriguez created the hashtag #huelgadehambreUNPACU (“hungerstrikeUNPACU”) to demonstrate solidarity with those carrying out the protest and the political prisoners. Blanco Rodriguez also published various messages informing that in diverse regions of the island there have been signs appearing with messages in favor of the strikers, while many public protests have been carried out, also in solidarity with the 26 dissidents which have put their own lives at risk for the freedom of others.
Posted by John Suarez at 9:33 AM