As Maduro seeks to turn Venezuela into a Cuban colony trouble back in Havana...

Despite the CELAC spectacle in Havana, Cuba the Castro regime's outlaw credentials were reaffirmed in a damning report from the United Nations widely reported, on its role in illegal arms smuggling to its ideological soul mate: North Korea. According to the report in a side note "some of the ... parts could also meet the criteria defined in the list of ... technology related to ballistic missile programmes." Also reported the refusal of the Castro regime to cooperate with the investigation. The report clearly states in paragraph 70 and 74:

70. The Panel concluded in its incident report submitted to the Committee that both the shipment itself and the transaction between Cuba and the Democratic People’s Republic of Korea were sanctions violations.

74. The Panel confirmed the route of the Chong Chon Gang was from Cuba to the Democratic People’s Republic of Korea. The voyage plan and other ship’s documents show that the vessel departed from the Democratic People’s Republic of Korea on 11 April, refuelled at the Russian port of Vostochny between 11 and 17 April before sailing to Havana via the Panama Canal. No records show the ship stopping at any countries other than Cuba between exiting the Panama Canal on 1 June and its return passage on 11 July. 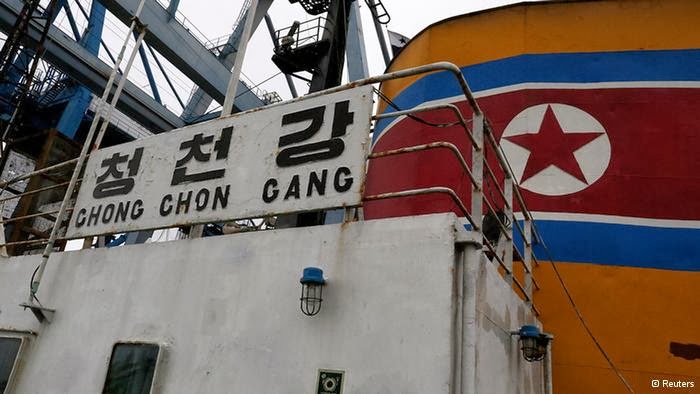 After being caught in flagrant violation of a number of international norms the Castro dictatorship attempted to provide a cover story:

76. On 16 July, the Ministry of Foreign Affairs of Cuba released a statement acknowledging ownership of the arms and related materiel and stating that they were being shipped to be repaired and returned. Cuba argued later to the Panel and in a report to the Committee that there was no “supply, sale or transfer” (as required by para. 8 (a) of resolution 1718 (2006)) since Cuba retained “ownership” of the cargo. Furthermore, it argued that “maintenance”, as set out in paragraph 8 (c) of resolution 1718, was distinct from “repair”, which Cuba claimed was the basis of its contract with the Democratic People’s Republic of Korea. Cuba also invited the Panel to visit Havana for consultations with the Panel, when it stated that all arms and related materiel were being sent for “evaluation, diagnosis and repair”. 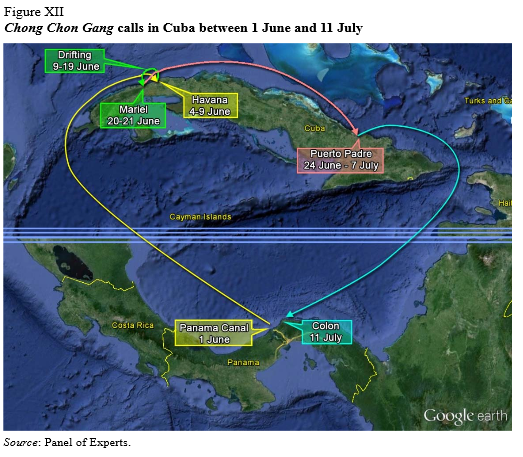 The United Nations investigators did not buy the explanation provided by Castro officials:

78. Following its investigation, the Panel confirmed the contents of the concealed consignment found onboard the Chong Chon Gang were arms and related materiel en route from Cuba to the Democratic People’s Republic of Korea and considered that:

.
Similarly, introducing an alternative interpretation of ownership relating to transfer, would permit the loan or lease of arms and related materiel, thereby crippling the arms-related and weapons of mass destruction-related embargoes
imposed by the resolutions.

The hiding of the weapons shipment under bags of sugar was not only evasive but a threat to safety: 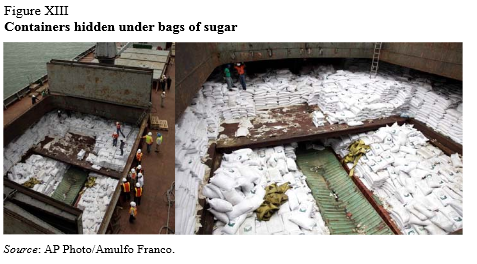 81. The concealment methods employed also flouted international regulations and safety practices and Canal regulations. The transportation of undeclared weapons and explosives in this manner posed a significant danger to all persons and facilities in proximity to the ship and should be a cause of concern among shippers, port authorities, the international maritime community and insurers.

As reported in the media the Castro regime refused to cooperate in identifying parties involved in the illegal arms sale:

87. The Panel sought to identify the consignor and consignee of the arms shipment. Documents found onboard show the consignor of the sugar to have been Cubazucar, and the consignee, Korea Central Marketing and Trading Corporation (see annexes XVI and XVII). No similar documents were found relating to the concealed cargo. In its consultations with the Panel, Cuba confirmed the parties involved in the sugar and said that the arms shipment was part of a governmental agreement. It declined, however, to give the Panel copies of these agreements, citing confidentiality clauses in the contracts. The Panel is not, therefore, able to identify the entities or individuals involved in these agreements.

Their are many in Washington, DC who when arguing for normalizing relations with Cuba argue that the regime in Havana doesn't pose a threat to the United States. They might be surprised by what the Castro brothers are shipping to North Korea. This is an extended excerpt:

(a) Type and quantities
1. A total of 25 standard shipping containers (16 forty-foot and 9 twenty-foot) and 6 trailers were found, for a total of about 240 tons of arms and related materiel.1 The Panel confirmed the presence of all the items declared by Cuba. The Panel did not find any items not mentioned in this list. Most of the consignment was of former Soviet military origin.
i. Surface-to-air missile systems
2.The largest part of this shipment consisted of various components of SA-2 (C-75 Volga) and SA-3 (C-125 Pechora)
2 surface-to-air missile systems.
3. It included various components for the associated SA-2 and SA-3 radar systems (Fan Song and Low Blow radars – figure 1) such as the 6 trailers (i.e. the vans housing the system electronics, the operator stations or the power generators); antennas, bases, transmitters and tracking systems, as well as their supporting structures; electric generators; and other miscellaneous equipment (reels of cables, transport trailers, control and measurements instruments, etc.). The trailers were clearly labelled as belonging to Volga and Pechora systems on a loading check sheet in the captain’s possession.

At the same time that the United States is warming relations with the Castro dictatorship and hinting at lifting remaining sanctions the Russians are now going to set up bases in Cuba, Venezuela, and Nicaragua.

5. The shipment also contained a total of four SA-2 and two SA-3 launchers, which had been disassembled to fit into standard shipping containers (figure 3).

6. In addition, various parts for three SA-2 and six SA-3 missiles were in the cargo, such as the nose cones housing proximity fuses, auto-pilots and transponders, transmitter antennas and some actuators (figure 4). 4
__________________
4 The Panel notes that some of the SA-2 and SA-3 parts could also meet the criteria defined in the list of items, materials, equipment, goods and technology related to ballistic missile programmes (S/2012/947), whose export and import by the Democratic People’s Republic of Korea are prohibited. See in particular the Category II, Item 9 of S/2012/947 covering “instrumentation, navigation and direction finding” 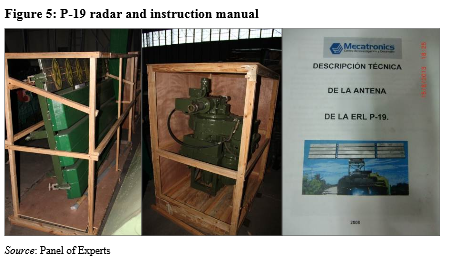 7.The shipment also contained a radar antenna, labelled “P-19”, and its associated supporting components. The instruction manual and certification report indicate that it is of Cuban manufacture (figure 5). 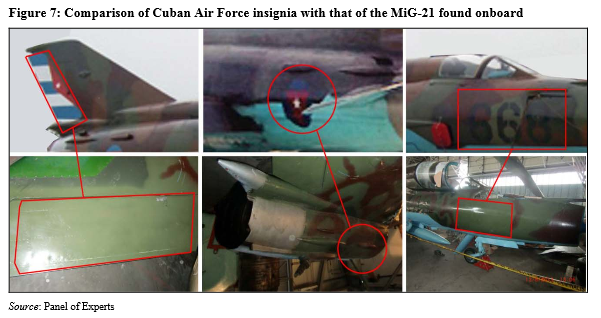 9. All identification markings and insignia of the Cuban Revolutionary Air Force had been removed from both MiG-21 aircraft; the Panel observed signs of overspray and scratch marks in places dedicated to original insignia (figure 7).

iii. Ammunition and ammunition manufacturing related items
10. The shipment included 10 lots of shells casings (packed with samples of propelling charge but without primers) of various diameters (57 to 152 mm) for various purposes (fragmentation, high explosive, armour piercing and or tracer). Each lot contained between five and eight shell casings (figure 8).

11. Eight 73 mm rocket propelled projectiles (PG-9/PG-15 anti-tank and OG-9/OG-15 fragmentation projectiles) to be fired with recoilless rifles, as well as a single PG-7VR round, a high explosive antitank tandem charge to penetrate explosive reactive armour, were also in the shipment (figure 9). The Panel observed that the 73 mm rounds were packed and shipped with at least the nose portion of the fuse in place. 5 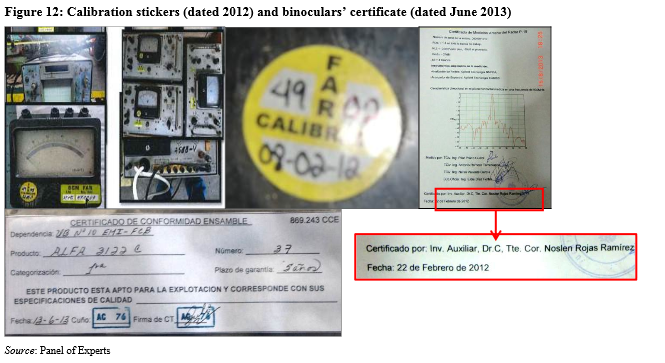 (b) Overall condition of the arms and related materiel
14. While the age of the items found in the shipment varied greatly, most appeared to have been well maintained. Records accompanying a great deal of the equipment indicated or certified the equipment functioned in accordance with specification or had been calibrated just prior to packing.
15.A large number of control and measurement instruments in the radar control stations carried stickers indicating that they were calibrated as recently as 2012 (figure 12). The night vision binoculars’ documents indicated that their conformity was certified less than one month before the shipment (figure 12). The P-19 radar antenna came with an instruction manual and a complete certification report dated February 2012 (figure 12).

This laundry list of weapons provided to the North Korean dictatorship which has threatened to launch nuclear weapons against the West Coast of the United States should give policy makers pause when told that the Castro regime poses no threat to the United States. According to the UN report despite denials of the Castro regime there was evidence of other possible arms shipment from Cuba to North Korea that went undetected:

33. Cuban authorities indicated to the Panel that, despite close cooperative ties, there was no previous shipment of arms and related materiel under this agreement or any other agreement from Cuba to the Democratic People’s Republic of Korea. While the Panel cannot corr oborate or refute this, it notes that the voyage of another Democratic People’s Republic of Korea-flagged and -owned vessel to Cuba presents a very similar pattern to the recent voyage of the Chong Chon Gang
.
34. On April 2012, the general cargo vessel O Un Chong Nyon Ho (IMO 8330815) operated by OMM, 11 sailed directly from Nampo to Cuba and back without any furt her calls in the region. After having stopped in Havana and Puerto Padre, the O Un Chong Nyon Ho drifted for several weeks off northern Cuba before returning for three weeks to Havana. Its Automatic Identification System was switched off (in violation of IMO requirements) during these three weeks, however, effectively preventing determination of further ports’ calls, as in the case of the Chong Chon Gang..

Taking North Korea off the list of state sponsors of terrorism was a mistake. Would taking Cuba off the list and opening travel between the two countries while the outlaw regime of the Castro brothers continues to run the island be a wise idea?