"I can't understand the hatred towards me. Because, really in the only field I’ve done battle, is the field of ideas." - Dr. Ricardo Bofill, 1987 in Nobody Listened documentary 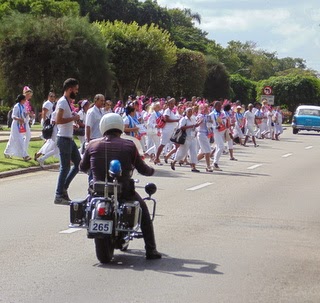 International Human Rights Day in Cuba 2014 and men and women in Cuba continue to be arbitrarily detained, harassed and beaten for peacefully demonstrating in favor of human rights. Thanks to courageous activists across the island the world learned about these injustices today via twitter moments after the repression unfolded and at the same time the nonviolent actions of nonviolent opposition and human rights activists. Here is a brief sampling of some of those voices:

Sayli Navarro reported tonight that "in Colon 5  Ladies in White gathered together where Caridad Burunate  lives and handed out copies of the Universal Declaration of Human Rights.

Angel Juan Moya at 8pm described over twitter how today, on December 10th, police beat Lady in White Adisnidia Dallet with a pistol while arresting her. He attached the above photo.

At 5:14pm the Ladies in White reported that the latest news was that hundreds had been detained and their counterparts abroad posted a press release.

Yoani Sanchez reported at 3:21pm over twitter that "police arrested and warned 14 y medio reporters for 'doing something illegal' ... but [Yoani exclaimed] they are doing journalism!"

Rosa María Payá Acevedo at 1:24pm over twitter provided the context for what was taking place: "December 10th will go down in history as the day of State Security brutality. This is how the Government makes a mockery of human rights in Cuba."

At 12:36pm today the Christian Liberation Movement (MCL) tweeted that "communist hordes assaulted the home of Elder Perez, of MCL in Majibacoa and beat up his wife who is pregnant."

Via telephone the Cuban Democratic Directorate today documented numerous demonstrations taking place across the island and also interviewed Sonia Garro who was sent home yesterday after spending two years, eight months and 22 days along with her husband and neighbor arbitrarily detained and is currently under house arrest. None of the three activists have undergone a judicial proceeding.

Regis Iglesias, spokesperson of the Christian Liberation Movement at 1:40pm over twitter posted a picture of Ricardo Bofill with the text: "Honoring honor. Ricardo Bofill, an essential reference in the defense of  Human Rights of Cubans."

These courageous activists are the disciples of Dr. Ricardo Bofill. Dr. Ricardo Bofill along with Martha Frayde and Eddy Lopez founded the Cuban Committee for Human Rights in 1976. In 1987, Nobody Listened, the documentary directed by Néstor Almendros and Jorge Ulla first introduced the world to Ricardo Bofill and the nonviolent human rights movement in this video.

Later in the same documentary, in the video above,  Dr. Bofill is interviewed and discusses his circumstances as a dissident in Cuba engaged in the battle of ideas:


"I can't understand the hatred towards me. Because, really in the only field I’ve done battle, is the field of ideas. In this field I’ve had no response just prison and the police. And I don’t know why because the revolution controls all mass media. They have editorials, journalists, even many writers in the world. I don’t know why the response, time and again, has been jail. The response should come in the field I fight in, with ideas. I was arrested again in 1983. On that occasion, I was sentenced to 17 years in jail accused of activities in the Cuban Committee for Human Rights and the last period of prison began. For reasons of health and others I know not of in 1985 I was placed in the status I’m now in which is “conditional liberty with restriction of movement.”

Following the interview with Bofill in an interview with Fidel Castro the name of the human rights defender is raised. Castro dismisses his importance, but it is obvious in the context of the interview that he knows very well who this lone activist is.  Bofill went into exile and the leadership of the Cuban Committee for Human Rights passed to Gustavo Arcos who died of natural causes in 2006, but remains an icon of the Cuban human rights movement.

What started in 1976 as three activists based in Havana, in and out of prison, is now 38 years later a nationwide movement of thousands who are nonviolently engaged in the battle of ideas and the defense of human rights. Today's repression across the island continues to demonstrate that the Castro regime is terrified of them.