"In the single session on Cuba, three activists complained that repression of government opponents and human rights workers in the country has continued and even increased since the announcement of normalization of U.S.-Cuba diplomatic relations last December." - Latin American Herald Tribune, March 20, 2015

On March 19, 2015 in the late afternoon in the Rubén Darío room, the one and only hearing on the human rights situation in Cuba during the 154 Period of Sessions was held at the Inter-American Commission on Human Rights (IACHR). The complete presentation is available online in Spanish and runs 54 minutes and 8 seconds.

However, for the sake of brevity there are some key observations that underline the reality that the human rights situation in Cuba under the Castro dictatorship is worsening:


“We have been receiving incredibly worrying reports about a rise in harassment and short-term detentions of dissidents throughout 2014 which has continued in recent weeks. Prisoner releases will be no more than a smokescreen if they are not accompanied by expanded space for the free and peaceful expression of all opinions and other freedoms in Cuba.”

Death threats and torture are common practices by agents of the dictatorship that are well documented and still continue in Cuba. The presentation on March 19, 2015 began with excerpts of two video interviews documenting the February and June 2014 raids on the home, arbitrary detentions and tortures of Jorge Luis García Pérez "Antúnez", and Yris Tamara Pérez Aguilera who testified before the IACHR in 2013. Following this testimony two IACHR members expressed concerns about reprisals against IACHR petitioners.

Also highlighted in the testimony was the arbitrary detention, beating and torture of human rights defender Juan Carlos González Leiva. The fact that Juan Carlos, who is an attorney, also happens to be blind and was physically brutalized while he could listen to his wife being manhandled by state security agents at the same time only compounds the outrage that took place on January 9, 2014. Source: Frontline Defenders.

Human rights defender and resistance activist now political refugee, Sara Martha Fonseca Quevedo gave testimony about her life in Cuba. Particularly disturbing was the account of being injected with a debilitating substance while walking with the Ladies in White and finding a spot of blood and finding a needle mark on her skin. Photograph of the blood spot on her white dress was presented to the IACHR. The full presentation in Spanish is available below. 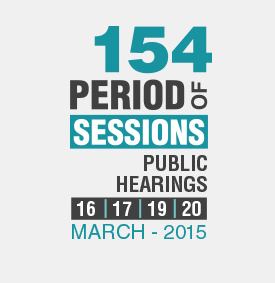