Lessons from Cuba and Vietnam 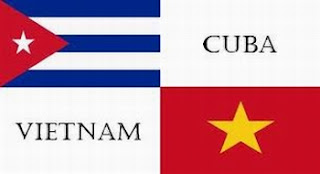 President Obama has arrived in Vietnam for an official visit, hopefully it will be more productive than his visit to Cuba. As was the case during the Cuba visit, public protests in Vietnam have been put down with force by the regime's security.

Human Rights Watch reports that Vietnam's human rights record remains dire in all areas. This in spite of the United States lifting economic sanctions on Vietnam on February 3, 1994 and normalizing relations on July 11, 1995.

US companies are investing in Vietnam and doing business with the Vietnamese dictatorship. Its totalitarian nature has not changed, but there is now a possibility of the United States selling weapons to this regime that represses its own people.

For example, Amnesty International reported on October 29, 2012 that two Vietnamese songwriters faced prison for writing songs criticizing their government. Vo Minh Tri, known as Viet Khang, 37, and Tran Vu Anh Binh, known as Hoang Nhat Thong, 41 were both held in custody since late 2011. According to Amnesty International both stood accused of "conducting anti-state propaganda under Article 88 of Viet Nam’s Criminal Code – an offense that carries a sentence of up to two decades." On October 30, 2012 Tran Vu Anh Binh (aka Hoang Nhat Thong) and Vo Minh Tri (aka Viet Khang) were sentenced to six and four years in prison respectively.


Tri, a.k.a. Viet Khang, was freed on December 13, 2015 and driven by police escort to his family’s home outside of Ho Chi Minh City. Tran Vu Anh Binh a.k.a. Hoang Nhat Thong who was jailed at the same time remains in prison.

There are many other political prisoners in Vietnam just as there are still many in Cuba.

Cuba, like Vietnam, also has a law 88 that carries up to a 20 year prison sentence. The fact that the laws and even the article numbers are the same may be a sign that Cuba and Vietnam are collaborating and sharing worse practices to maintain repression in their respective countries.William J. Dobson has described how this process occurs in his book, The Dictator's Learning Curve.

This leads to the conclusion that economic engagement with the United States has not led to political liberalization in Vietnam and it will not do so in Cuba. Meanwhile the sanctions policy on Burma did play a role in generating reforms.

Human Rights Watch is calling on President Obama to press the regime in Vietnam to end its crackdown on peaceful activists and to hold free elections.  Amnesty International is calling on the U.S. President to urge the Vietnamese communist dictatorship to free over 80 political prisoners during his visit to the country.