#WithCaracas: Time to take a stand for Venezuela's freedom 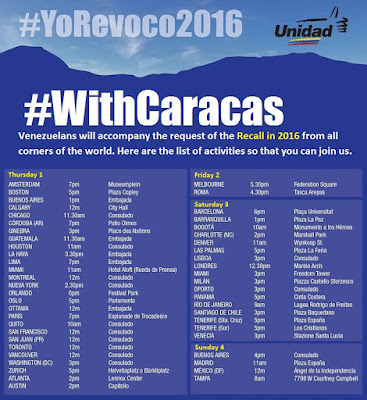 There are times when one must speak out because to remain silent is to be complicit in a great crime. Over the past 16 years the Chavista regime in Venezuela has undermined democracy and the rule of law in that country while erecting a totalitarian regime there. Too many continue to pretend that Venezuela is still a democracy and keep silent. However the facts speak otherwise and we owe it to courageous democratic Venezuelans not only to speak out but to take a stand for freedom in Venezuela.

Last night imprisoned opposition leader Leopoldo Lopez was able to get a message out over twitter reaffirming his commitment to nonviolence as the means to achieve a better Venezuela and calling on his fellow citizens to take to the streets of Caracas today, dressed in white and nonviolently in their exercise of their fundamental rights. Recall his final speech in freedom it remains extremely relevant today.


As I write these lines, in Venezuela journalists continue to be expelled from the country, armed raids by Maduro's political police are being carried out against the nonviolent political opposition, and confirmed that 37 Venezuelans arbitrarily detained over the past 48 hours leading up to today's protest. Among them, Yon Goicoechea, a youth leader and the 2008 Milton Friedman Prize Laureate.

What drives the dissatisfaction with the Maduro regime? Consider the following:
This is why we need to stand with Caracas today, denounce the Maduro regime, and support the Venezuelan people's recall effort to rid themselves legally and constitutionally of Nicolas Maduro and the Chavista regime. In Miami on Saturday September 3rd at 3:00pm at the Freedom Tower will be an opportunity to demonstrate solidarity with Caracas and free Venezuelans. 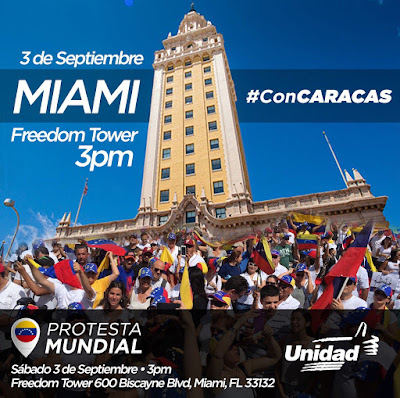