“If you have an important point to make, don’t try to be subtle or clever. Use a pile driver. Hit the point once. Then come back and hit it again. Then hit it a third time-a tremendous whack.” - Winston Churchill

Churchill's Pub is a British punk rock landmark in the heart of Miami's Little Haiti but over the past year on two occasions it seemed to be channeling Little Havana. Six heavy metal bands organized a Death of Castro Fest held on January 13, 2016 to celebrate the death of the Cuban tyrant who died on November 25, 2016. This festival once again demonstrates the level of rejection of Fidel Castro regardless of age. 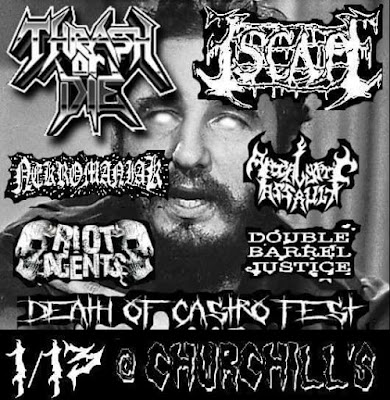 The Miami New Times reported on the Death of Castro Fest and David Rolland promoted the event in its pages as follows.