Cuban punk rockers tear it up at Churchill's 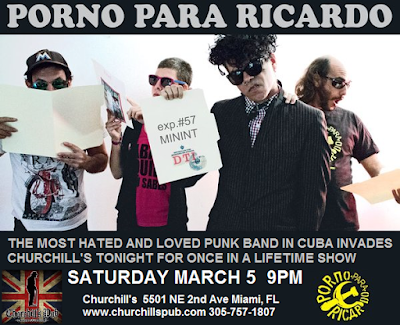 However short term arrests, threats and the occasional beating by the secret police still continue. For example in 2015, according to the Danish human rights NGO, Freemuse, Gorki was arrested on three occasions and in one of them beaten up by Castro's agents for demanding the freedom of Cuban artist Daniel Maldonado "El Sexto" who had been jailed for 10 months beginning in December of 2014 for trying carry out a performance art piece critical of the Cuban dictatorship. He was freed in October of 2015 and on March 2, 2016 kicked off an exhibition of his art work on South Beach with his performance art piece and Porno para Ricardo performing a set of their music. However, the concert in Churchills was special because for the first time the entire band (Gorki Águila, Ciro Díaz, Lia Villares, and Renay Kairus) was able to play together outside of Cuba.

If you missed this great performance you have one more chance today at 6pm in Little Havana at Cubaocho Museum and Peforming Arts Center where they will be playing. The band returns to Cuba later this week.