“All have understanding and will and free choice, as all are made in the image and likeness of God . . . Thus the entire human race is one.” - Bishop Bartolomé De Las Casas (1550)

We are in the midst of an international human rights crisis. Will we rise to the occasion once again?

Human Rights are in crisis around the world and have been for some time. At such a moment it is important to return to and reflect on first principles.  The idea that human rights predate the rules set out by governments, some important thinkers argue, is based on natural law.  In 1951 the Christian Democrat philosopher Jacques Maritain published Man and the State and on pages 84-85 of his book explored the historic and rational foundation of human rights in the natural law that remains relevant today:


Shall we try to establish our faith in human rights on the basis of a true philosophy?  This true philosophy of the rights of the human person is based upon the true idea of natural law, as looked upon in an ontological perspective and as conveying through the essential structures and requirements of created nature the wisdom of the Author of Being.

The genuine idea of natural law is a heritage of Greek and Christian thought. It goes back not only to Grotius, who indeed began deforming it, but, before him to Suarez and Francisco de Vitoria; further back to St. Thomas Aquinas (he alone grasped the matter in a wholly consistent doctrine, which unfortunately was expressed in an insufficiently clarified vocabulary, so that its deepest features were soon overlooked and disregarded); and still further back to St. Augustine and the Church Fathers and St. Paul (we remember St. Paul's saying: "When the Gentiles who have not the Law, do by nature the things contained in the Law, these, having not the Law, are a law unto themselves ...") and even further back to  Cicero, to the Stoics, to the great moralists of antiquity and its great poets, particularly Sophocles.  Antigone, who was aware that in transgressing the human law and being crushed by it she was obeying a better commandment, the unwritten and unchangeable laws, is the eternal heroine of natural law: for, as she puts it, they were not, those unwritten laws, born out of today's or yesterday's sweet will, "but they live always and forever, and no man knows from where they have arisen." 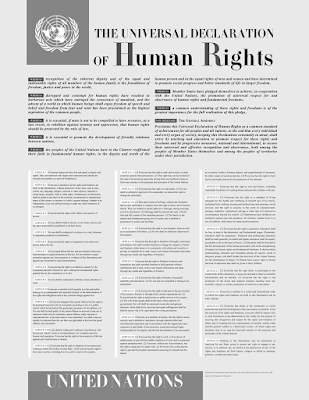 Jacques Maritain played an important role in the drafting of the Universal Declaration of Human Rights in 1948 and  in the above mentioned book described how individuals of radically different and traditions were able to come to a consensus on a fairly detailed document.


"How  is  an  agreement  conceivable  among  men  assembled  for  the  purpose  of  jointly  accomplishing  a  task  dealing  with  the  future  of  the  mind,  who  come  from  the  four  corners  of  the  earth  and  who  belong  not  only  to  different  cultures  and  civilizations,  but  to  different  spiritual  families  and  antagonistic  schools  of  thought?  Since  the  aim  of  UNESCO  [United  Nations  Educational,  Scientific  and  Cultural  Organization]  is  a  practical  aim,  agreement  among  its  members  can  be  spontaneously  achieved,  not  on  common  speculative  notions,  but  on  common  practical  notions,  not  on  the  affirmation  of  the  same conception  of  the  world,  man,  and  knowledge,  but  on  the  affirmation  of  the  same  set  of  convictions  concerning  action.  This  is  doubtless  very  little,  it  is  the  last  refuge  of  intellectual  agreement  among  men.  It  is,  however,  enough  to  undertake  a great  work;  and  it would  mean  a  great  deal  to  become  aware  of  this  body  of  common  practical  convictions."

Timing is also key and in the aftermath of World War II where the crimes of the Nazi Holocaust were exposed to the world, and the failure of the nation state not only to protect the lives of its citizens but to systematically slaughter them created a shock to the conscience of the international community that made the drafting of such a document possible. The Universal Declaration of Human Rights was ratified in Paris, France on December 10, 1948. It had happened before.

Four centuries earlier in the midst of a clash of civilizations beginning with the arrival of Christopher Columbus in the Americas in 1492 and the Spanish conquest of the Aztec empire in 1519 and the Inca empire in 1532.  Native Americans were enslaved and mistreated by the Spanish conquerors, but this led to the Dominican friar Bartolomé de Las Casas publishing "The Devastation of the Indies" outlining Spanish cruelty against the indigenous peoples of the Americas.

On July 3, 1549 the Council of the Indies declared to the King of Spain that the harm to the Indians and to the King’s moral standing by the ongoing conquest required an examination of what was taking place. The Council declared:

The greed of those who undertake conquests and the timidity and humility of the Indians is such that we are not certain whether any instruction will be obeyed. It would be fitting for Your Majesty to order a meeting of learned men, theologians, and jurists … to … consider the manner in which these conquests should be carried on … justly and with security of conscience.

In April of 1550 the King, Charles I of Spain and Charles V of the Holy Roman Empire, ordered that all New World conquests be suspended until a special group of theologians and counselors would decide upon a just method of conducting them. This led to a debate regarding the treatment of Native Americans by the Spanish conquistadors that took place in the Spanish city of Valladolid between the lay scholar Juan Ginés de Sepúlveda and now Bishop de Las Casas that same year. It was the first time that the morality of conquest was formally debated and a universal conception of human rights discussed that challenges assumptions today.

In 1550 and 1948 two international human rights crises led to two debates and reflections that first during the Spanish conquest of the Americas generated the idea of universal human rights and following the carnage of WWII and the Nazi Holocaust led the international community to agree on a Universal Declaration of Human Rights.

Today in 2017, human rights have been in decline worldwide for more than a decade and all signs point to continued deterioration. Will this lead to another round of debate and reflection that will turn the tide in 2018?

Will a world leader stop a foreign action in order to examine the moral implications as King Charles V did in Spain in 1550? Will the international community come together as they did in Paris in the aftermath of World War II and the Holocaust in 1948 and forge a new commitment to human rights?

Questions one ponders on the eve of the possible arrival of  Hurricane Irma.