Human Rights in Cuba: Shadow UPR and three Cubans killed during the span of the current review

“The truth does not change according to our ability to stomach it.” - Flannery O'Connor 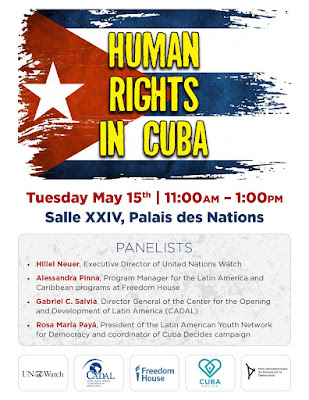 Over the past few days this blog highlighted three cases from the past four years that highlight the cruelty of the Castro regime: in 2014 a blind attorney beaten down by state security agents; in 2015 a human rights defender and mother lost her hand and the use of her knees in a machete attack ordered by regime agents in reprisal for trying to keep a school open; and in 2016 a Cuban doctor was beaten down in front of his wife and children and taken to prison where he remains today suffering assaults and ill treatment for giving his honest opinion of the legacy of Fidel Castro.

Today in Geneva, Switzerland just steps away from where the Universal Periodic Review will be held on May 16th there was a self-described "Shadow UPR" that highlighted more recent cases, and the steps taken by the dictatorship in Cuba to avoid being held accountable. Below are the videos of the entire event and are worth watching.

Sadly there are those who will be unable to do so because they were victims of extrajudicial killings carried out by agents of the Castro over the past four years. Below are three cases, but sadly there are more.

Yunisledy Lopez Rodriguez was 23 years old, the mother of two small children and she lived in Vista Alegre, in the Municipality of Majabiquoa in Las Tunas, Cuba. She had suffered harassment from state security agents, who had wanted to evict her and her children from their home for her activism in the Civics and Truth movement.

Yunisledy found out that her then boyfriend "Ruber" had been given the order to kill Cuban dissident Sirley Avila Leon by state security. Yunisledy immediately told Sirley Avila Leon of the danger and on May 21,  2014 when Sirley's home was set on fire formally complained to the police. She reported that her partner had told her that he would murder Sirley and that through the above action had attempted to carry it out. The police never made a pronouncement on the matter and did nothing.

Afterwards "Ruber" warned Yunisledy and told her that if she did not want to be killed that she should join him in Camaguey where he had been given the possibility to work as a "cuenta propista"  as a reward for carrying out his arson attack against Sirley Avila Leon and to give the impression that he was in a prison elsewhere. [This is an aspect of the job sector opportunities that Amnesty missed in their report.]

She  denounced the new threat to the police but no action was taken against him and he went away. After two months approximately September 20-21, 2014, another man,  the father of her young son appears at her home and tells her that he'll kill her. But instead rapes her in front of her children and leaves.

Immediately she went to the police and made a complaint because he was supposedly a prison escapee, but the police took no action. They told her not to worry that he was already back in prison. Yunisledy called Sirley on September 24, 2014 and told her that they both knew why he was being sent to kill her. Yunisledy asked Sirley to care for her children because she had no police protection.

On September 26, 2014 while preparing food for her children the individual known as "El Tejon" entered the house and stabbed her 18 times in front of her two kids. This was done to give the appearance of a crime of passion.

On December 16, 2014 the Cuban coastguard ram and sank a boat with 32 refugees, one of them, Diosbel Díaz Bioto, was killed. Article 13 of the Universal Declaration of Human Rights states: "(1) Everyone has the right to freedom of movement and residence within the borders of each state. (2) Everyone has the right to leave any country, including his own, and to return to his country." This is completely and systematically violated in Cuba.

Yuriniesky Martínez Reina (age 28) was killed by state security chief Miguel Angel Río Seco Rodríguez in the Martí municipality of Matanzas, Cuba on April 9, 2015 for trying to leave Cuba. He was part of a group of young men who were building a boat near Menéndez beach to flee the island, when they were spotted trying to leave and were shot at by state security. Yuriniesky was shot in the back and left to die.  He was found face down in some brush.