Project Varela: Looking back at the nonviolent campaign 16 years later

"Two days before a historic visit to Cuba by the former President Jimmy Carter, human rights activists today delivered an extraordinary challenge to the Communist government of President Fidel Castro in the form of petitions signed by more than 11,000 people seeking greater freedom. The petition drive, known as the Varela Project, calls for a referendum under the terms of the Cuban Constitution on whether there should be more freedom of expression, an amnesty for political prisoners and a chance for ordinary citizens to own small businesses. The signed petitions were delivered this morning to the National Assembly, after supporters painstakingly verified each signature, in the most significant peaceful effort to bring reform to Cuba in four decades. ''All of these Cubans, who with great courage and sacrifice have signed Project Varela, are the social vanguard for peaceful change in Cuba,'' said Oswaldo Paya, who led the drive. He said changes in the rights of Cubans could only be achieved peacefully.

The three activists, members of the Christian Liberation Movement, would pay a high price, along with dozens of others, for advocating human rights reforms within the existing legal frame work in Cuba. In March of 2003 both Antonio Diaz Sanchez, and Regis Iglesias were arrested and subjected to political show trials and sentenced to long prison sentences. They would spend years in prison followed by forced exile. Oswaldo Payá was killed, together with Harold Cepero, on July 22, 2012 under circumstances that point to a state security orchestrated extrajudicial execution.

Tony Diaz Sanchez and Regis Iglesias, two of the three in the photograph when the signatures were turned in, reflected today on the significance of what took place sixteen years ago. 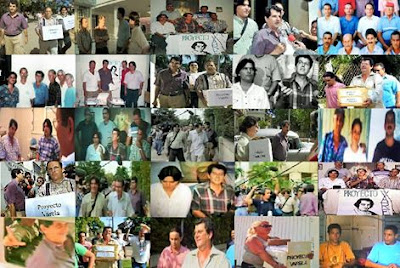 Regis Iglesias on the 16th anniversary of turning in 11,020 signatures for a democratic change reflected on the importance of the Varela Project in AlgoritmoMag.


It was the first time that Cubans voted or demanded to do so after almost half a century of dictatorship that May 10, 2002, when Oswaldo Paya, Tony Diaz and I crossed the threshold of the offices of the National Assembly of People's Power and presented their officials the signatures that legitimized our demand for a referendum.Eleven thousand twenty Cubans with the right to vote, protected by among other articles 1, 3, and fundamentally 88, paragraph g of the draconian socialist constitution in force, took the step and with their personal data supported the demand for a referendum on the Varela Project, so that the law will guarantee the right to "political freedom", "popular sovereignty", the freedom of political prisoners and the economic freedoms of Cubans.More than a civic and legal exercise the initiative of the Christian Liberation Movement and its founder Oswaldo Paya, finally found a methodology to create the minimum social base in the middle of a totalitarian and repressive state in which the opposition is not recognized and dissidence is considered treason.

Regis concludes his essay observing that the work is unfinished.


Sixteen years later we continue with many Cubans demanding these rights, only when they are recognized and guaranteed can we rest, then we can kneel faceing the tombs of Orlando Zapata, Oswaldo Paya, Harold Cepero, Arturo Pérez de Alejo and many of our brothers who are no longer and tell them, "Friends, we've made it!"


"At 16 years from Project Varela, honoring the memory of Oswaldo & Harold, we demand freedom of Eduardo Cardet and reiterate, that the transition begins when the law changes and guarantees free elections. "One Cuban one vote" that is our proposal."

A couple of days before the signatures were turned over on May 8, 2002 Oswaldo Payá, coordinator of referendum petition was video recorded by the Associated Press:


"Nobody speaks any longer for the Cubans. The Cuban people should be consulted via a referendum and be given a voice because now we want our rights and the Varela Project is not just a test, or an intellectual exercise. It is not a rehearsal to gain experience. It is an initial step in our determination to acquire these rights. Because four decades is enough and a new generation is being born that has been born without rights".