Tiananmen Square at 29: Remembrance and a call to action 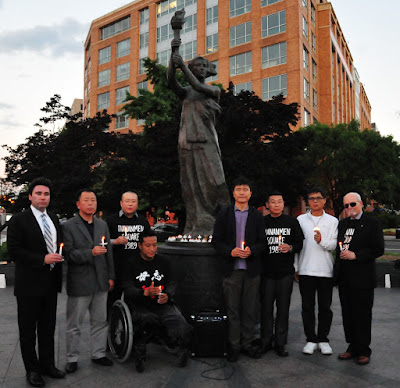 Tonight on the 29th anniversary of the Tiananmen Square massacre we gathered by the Victims of Communism Memorial in Washington, DC and at 8:00pm began a vigil for all those killed. Survivors gathered and gave their testimony.
We listened to Fang Zheng, who lost both his legs after they were crushed by a Chinese tank 29 years ago. Last month, like tonight, he was introduced by Yang Jianli, another survivor of Tiananmen at the Oslo Freedom Forum.

Tonight I listened to Cui Jian's song, Piece of Red Cloth, that he played for protesters during the 1989 Tiananmen protests, it remains a powerful song today.

In Hong Kong over a 115,000 people gathered in a candlelight vigil in remembrance of those killed on June 4, 1989 in China.

Following the June 4, 1989 crackdown and massacre on June 5th one man stood up to a line of tanks involved in the Tiananmen Square slaughter to express his moral outrage and blocked them. At the same time it is important to remember that the driver in that lead tank refused to run over the protester. Both individuals are heroes and both their fates remain unknown. 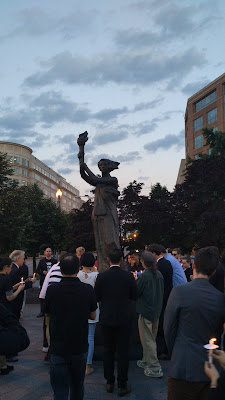