Narrow races in Florida.
President Barack Obama came to South Florida and campaigned for Mayor Andrew Gillum and Senator Bill Nelson in their respective state-wide races in the last days of the campaign. During his campaign stop in Miami he contrasted his Cuba policy with that of President Trump's. Was that a wise decision for Democratic strategists?

Let us consider the following. First, Obama did well among Cuban-Americans in South Florida both times he ran (2008 and 2012). However, he ran as a supporter of economic sanctions on both occasions, and was introduced to the Cuban-American electorate at an event organized by the Cuban American Nations Foundation in 2008. The shift in policy did not occur until December 2014. There is evidence that part of the reason that Hillary Clinton lost South Florida narrowly to Trump in 2016 was due to the Cuban American vote.

Following the election the Obama White House on January 12, 2017 released a "Statement by the President on Cuban Immigration Policy" that did two concrete things: further restricted the Cuban Adjustment Act and ended the Cuban Medical Professional Parole Program. According to Elena Toledo writing in the PanAm Post 15,135 Cubans were declared “inadmissible” in the United States in 2017 and 14,037 Cubans were rejected from entering through Laredo, Texas alone.

For Cuban-Americans it is not only normalizing the Castro regime, but shutting the door on Cuban refugees, and Cuban doctors subjected to terrible working conditions in other countries. These are not popular positions.

Pro-Castro lobbyists for decades have been claiming that the Cuban-American vote was changing into one more in line with their positions. Democrats who bought into that line have paid a heavy price, but that was not always the case. Democrats Dante Fascell, and Claude Pepper were prominent liberals in Congress for decades who consistently won the Cuban-American vote because they were tough on Castro, much the same way Senator Bob Menendez and Congressman Albio Sires are in New Jersey today. 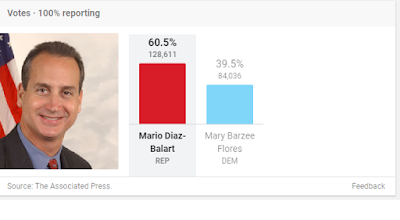 The congressional district with the largest concentration of Cuban-American votes in the country is currently Florida's 25th.  On election day 2018 Representative Mario Diaz-Balart, who represents that district, cruised to victory with 60.5% of the vote versus his democratic opponent Mary Barzee Flores who favored President Obama's Cuba policy who got 39.5% of the vote. Congressman Diaz Balart's district includes, the heavily Cuban and working class city of Hialeah. Did they vote him into office for his positions on tax cuts or his human rights centered policy approach to Cuba, Venezuela, and Nicaragua?

If one looks at the other two districts that have Cuban American members of Congress the demographics breakdown with a large non-Cuban Hispanic population, non-Hispanic whites, and African Americans for the most part.  They are also areas that went Democratic in national elections in the past. It is also interesting to underscore that Donna Shalala (Democrat ) released advertisements in Spanish exposing deferential comments made by Maria Elvira Salazar, her opponent,  to Fidel Castro during an interview. Furthermore, Shalala also went after her Republican opponent for suggesting Trump should engage in talks with Raul Castro. Lastly, there was also Mayra Joli, a third party pro-Trump Hispanic candidate running as an independent who got 2.5% of the vote. Incidentally, President Obama allegedly snubbed candidate Shalala. Did it hurt or help her chances in that district? 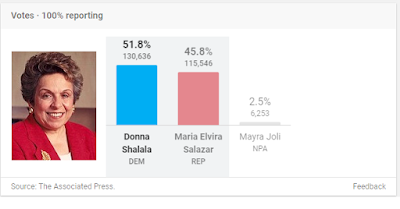 Representative Carlos Curbelo lost by 1.8% to Debbie Mucarsell Powell in a race that focused on healthcare in a district that trends Democratic and includes the Florida Keys. These are competitive districts and in the year with a blue wave this candidate lost by a narrow margin.

Recounts may soon be underway for the next Governor and Senator in Florida, but Democrats should be asking themselves did it have to end that way? Or was it a mistake to re-litigate Cuba policy in Miami on the eve of an important mid-term election?