President Miguel Diaz-Canel is visiting North Korea in a high level visit with the leaders of the Hermit Kingdom that is being dubbed the North Korea-Cuba Summit.

It is important to recall that the Castro regime has had a close and strategic relationship with the Kim regime in North Korea that stretches back decades to 1959.

They both share much in common, including an ideology that has cost more than a 100 million deaths.

Both export slave labor overseas to enrich the dictatorship.

Both claim to have a world class health care system, but the facts are more modest.

Cuban and North Korean troops are both present in Venezuela, helping to shore up the Maduro regime.

Furthermore, it is also important to recall that the Castro regime was caught smuggling tons of heavy weapons and ammunition from Cuba to North Korea in 2013.

The United Nations confirmed in 2014 that government of Cuba had violated international sanctions imposed on the regime in North Korea.

In May 2014 the North Korean official press engaged in a racist screed against President Obama.

On January 2, 2017 Cuban troops in Havana marched in a parade over which Castro presided chanting that they would repeatedly shoot President Obama in the head so many times that they would make a “hat of lead to the head.”

At least 120,000 people remain arbitrarily detained in inhumane conditions in North Korea. Mass executions, torture, and extrajudicial executions have been features of North Korea and Cuba. Both regimes have a terrible track record both on human rights and honoring their agreements. 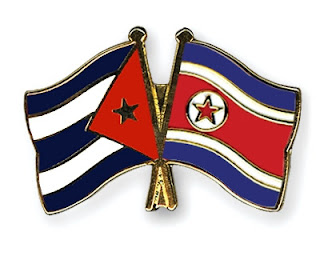