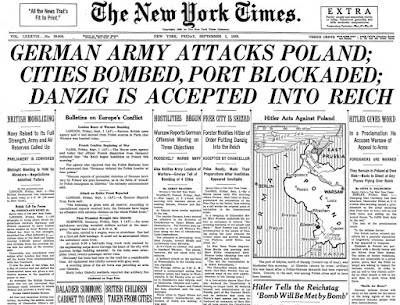 Today marks the 80th anniversary of the start of World War Two. Nazi Germany invaded Poland on September 1, 1939 and on September 17th their Soviet allies invaded from the East. This was agreed to in the secret protocols of the August 23, 1939 Molotov-Ribbentrop pact. (Also known as the Hitler-Stalin Pact).

Very early in the morning, on this day 80 years ago, Hitler’s attack against Poland started. Stalin had given Hitler green light for the attack, but UK and France declared war in response. WW2 started. pic.twitter.com/f49QwZGorM
— Carl Bildt (@carlbildt) September 1, 2019


World War One was supposed to be the “war to end all wars,” but instead it turned out to be the protracted suicide of the West over four years and three months. Nazi Germany and Communist Russia emerged out of the ashes of the 1914-1918 conflict and together plunged the world into another, longer and more costly total war 80 years ago today.

This six year conflict began on September 1, 1939 and ended six years and one day later on September 2, 1945.  An estimated 15 million soldiers died on the battlefield, and 45 million civilians were killed in the conflict.

Whereas WWI empowered the toxic ideologies of Communism and Nazism, the Second World War gave rise to nuclear weapons, the unique evil of the Holocaust, and the possibility of human engineered planetary extinction.

1939: On 1 Sept, Germany attacked Poland. The German battleship Schleswig-Holstein shelling a 🇵🇱 base on the Westerplatte peninsula fired the opening shots of WWII.

On 17 Sept, Red Army invaded 🇵🇱, as set out in the secret protocol of the Molotov-Ribbentrop pact.#80WW2 pic.twitter.com/UshLm1iQ0F
— Ministry of Foreign Affairs 🇵🇱 (@PolandMFA) September 1, 2019