#OTD in 1993 guards on patrol boats lobbed grenades on Cuban swimmers in the waters near the Guantanamo Naval Base. Providing some context.

Murdering fleeing refugees is a recurring practice of the Castro regime.

* On June 26, 1993 at 11 a.m., three patrol boats surrounded a group of swimmers, lobbing grenades and spraying them with automatic weapons fire. At least three corpses were lifted out of the water with gaffs.
* On June 27, 1993 at 11:30 a.m., guards aboard patrol boats lobbed two grenades into the water.
* The same day, just before 3 p.m., a patrol boat opened automatic fire on a group of swimmers, who were later seen being pulled from the water. The swimmers' status was unknown.

U.S. soldiers patrolling the Guantanamo Naval Base perimeter were horrified by what they observed. It led to a formal diplomatic note to the Castro regime by the Clinton Administration.

This in turn led to a front page story in The Miami Herald on July 7, 1993 that described what had been witnessed:


Cuban marine patrols, determined to stop refugees from reaching the U.S. Naval Base at Guantanamo Bay, have repeatedly tossed grenades and shot at fleeing swimmers and recovered some bodies with gaff hooks, U.S. officials charged Tuesday. At least three Cubans have been killed in the past month as Cuban patrol boats attacked swimmers within sight of U.S. Navy personnel at Guantanamo.

Human rights defenders in Cuba who attempt to quantify the numbers of dead or missing refugees are targeted by state security and made a cautionary example to others.

Francisco Chaviano González, a former mathematics teacher, and human rights defender was the president of the National Council for Civil Rights in Cuba (Consejo Nacional por los Derechos Civiles en Cuba - CNDCC), an organization whose work included "documenting the cases of Cubans who have been lost at sea trying to leave the country." 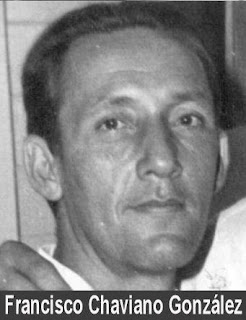 Chaviano was trying to investigate the cases of a number of Cubans who had gone missing. He was  warned by state security to stop his human rights work or he would be arrested and sentenced to 15 years in prison. He refused to leave and was detained on May 7, 1994, drugged and subjected to a military trial and sentenced to 15 years in prison of which he served over 13 years in terrible conditions suffering numerous beatings and the denial of healthcare which led to a wholesale decline in his health. Amnesty International recognized Chaviano as a prisoner of conscience. Chaviano was released on August 10, 2007. He was forced into exile in 2012. 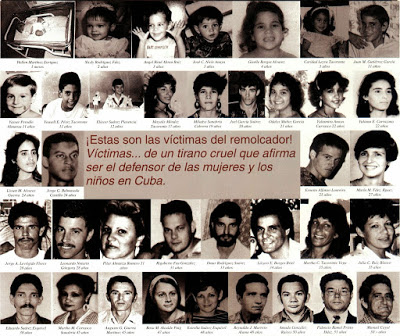 On July 13, 1994 the tugboat "13 de marzo" was surrounded, attacked and sunk by regime agents in a massacre that killed 37 Cuban refugees, the majority women and children.

On December 16, 2014 the Cuban coastguard rammed and sank a boat with 32 Cuban refugees on board. On this occasion one refugee,  Liosbel Díaz Beoto (age 32), went missing and is presumed dead, while the others were repatriated to Cuba.

On April 9, 2015 a group of men in their 20s and 30s were building a small boat to escape Cuba when they were shot at by the head of state security, Miguel Angel Río Seco Rodríguez, in the municipality of Martí in the province of Matanzas in Cuba. Shot in the back and left for two days in a lagoon, before being found by his brother, was 28 year old Yuriniesky Martínez Reina. Unlike the families of many other victims who are intimidated into silence, Yuriniesky's family spoke out, identified his killer and demanded justice in a video published on April 27, 2015 by Libertad Press.
This is not an  exhaustive accounting by any means, and efforts to document these incidents, as was seen in the Chaviano case, invites retaliation by Castro regime officials.