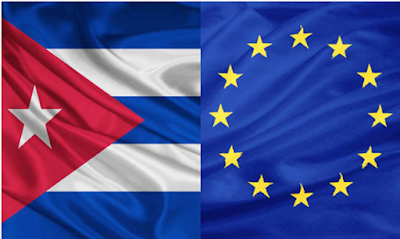 Cuba won a victory at the European Parliament (EP) on June 10, 2021, and the Castro dictatorship, together with its allies, suffered a double defeat when the EP resolution on the human rights and political situation in Cuba (2021/2745(RSP)) passed with 386 voting for the resolution, 236 against the resolution, and 59 abstaining.

This was a victory for Cuba because the European Parliament acknowledged "the right of the Cuban people to demand the democratisation of their country through a dialogue with civil society and the political opposition in order to establish a roadmap towards democratic multi-party elections." This elected body recognized that the sovereignty of Cuba exists among all Cubans, not the dictatorship that has ruled them with force for 62 years. Furthermore this deliberative body outlined the present situation in the island nation, and the systematic absence of human rights.

The resolution also demanded action on the part of EU officials recognizing where true sovereignty lies. It "calls on the Vice-President of the Commission / High Representative of the Union for Foreign Affairs and Security Policy to acknowledge the existence of political opposition to the Cuban Government, and therefore to include it in the institutionalized, formal, open and public political dialogues between the EU and Cuba, upholding the pillars of the EU Political Dialogue and Cooperation Agreement (PDCA)." Something that they have refused to do under this agreement.The EP resolution passed on June 10th strongly condemns the jailing of Cuban dissidents, the existence of political prisoners, and recognizes that the PDCA with Cuba has not led to "any substantial and tangible positive result for the Cuban people."

The resolution demands an "immediate repeal of Decrees 349 and 370 and other Cuban laws that violate freedom of expression;" and condemns "the systemic labor and human rights violations committed by the Cuban state against its healthcare personnel assigned to work abroad on the medical missions.”

The resolution also recognizes that "the imprisonment of Denis Solís González, Luis Robles Elizástegui, Maykel Castillo Pérez (‘Osorbo’)," ... "and more than 120 political prisoners and convicts of conscience, and all the arbitrary and repressive actions registered in April and June 2021, constitute a breach" of the agreement and a case of special urgency, as established in Article 85 (3b) of the PDCA; calls for the EU to convene an urgent meeting in this regard accordingly."

This places the EU bureaucracy in the spotlight, and repudiates claims made in official documents that have drawn the ire of Cuban dissidents. Rosa María Payá and Cuba Decide in their January 2020 letter to the European Union cited the "EEAS’s 2016 Annual Human Rights and Democracy in the World report, which describes the island’s government regime with the following absurdity: 'Cuba is a one-party democracy, with elections that are held at the municipal, provincial, and national level.'

The European Parliament voiced its displeasure with the "current EU Ambassador in Havana [who] has publicly made statements affirming that ‘Cuba is not a dictatorship.’" 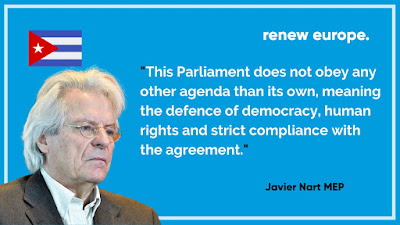 Three political groups, spanning from the center left to the right, sponsored the resolution and below are the Members who signed on representing their respective parties.

Missing where the Socialists & Democrats Group, and this is where the Castro dictatorship, together with its allies, suffered their second defeat.

Pilar Ruiz Huélamo, a member of the Socialists & Democrats Groups and Spain's PSOE Party in an e-mail communicated:

"PPE and RENEW have asked for a point in the next plenary session on the situation in Cuba, Borrell's statement with resolution. One of the points they want to denounce is the one described in this manifesto that 5 deputies have already signed. As you know, it will be difficult to stop it, we do not have a majority. I wonder if you want to notify the Cuban Embassy or that I notify Heidy. Borrell's cabinet is already aware. I take the email to make an appointment with Javier next week to discuss this issue and others if possible."

The response by Isabel Garcia Tamara, from Javier Moreno Sánchez's office, confirmed the collusion with the Castro regime when she instantly answers yes, that they will carry out the communication with Havana and the appointment with "JM", president of the PSOE in the European Parliament and president of the Friendship Group with Cuba. Mr. Moreno Sanchez is an avid defender of dictator Raúl Castro.

Below is the excerpt of the above mentioned e-mail that had circulated among members of the Socialists & Democrats Group that appeared in the Spanish Daily, ABC. 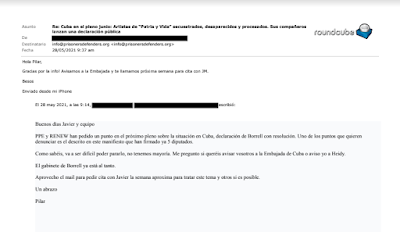 This led José Ramón Bauzá, a member of the Spanish centrist party Ciudadanos [Citizens] to write a letter to Josep Borrell Fontelles, the High Representative for Foreign Affairs and Security Policy for the European Union asking if his staff had been involved in trying to shut down debate on human rights in Cuba at the European Parliament. 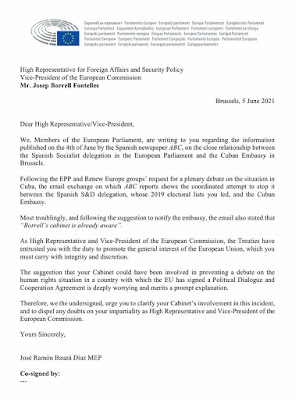 As time passes, the decision of Lithuania not to ratify the PDCA with Havana, is now viewed both as a historic act of solidarity with Cubans, and looking out for European interests.

Free Cubans owe Lithuanians a debt of gratitude. When the rest of the European Union embraced the Castro regime in a EU-Cuba agreement that gutted human rights concerns it was the Lithuanian Parliament that stood alone in 2020 refusing to ratify it with leaders saying it would betray "Cuban political prisoners" and demanding a commitment to human rights and democracy for the Cuban people.

Other EU states who ratified the PDCA with the best of intentions ended up providing millions in Euros to the Castro dictatorship, making the EU complicit in the repression of Cuban dissidents, the exploitation of Cuban workers, and the destabilization of democracy in Latin America.

We hope that Lithuania will no longer be standing alone, and that other EU member states will join Vilnius in defending both the interests of Europe and the well being of 11 million Cubans, and to not confuse them with the dictatorship oppressing them. The June 10th resolution is a good start, but there is more to do in order to cut off funding to the dictatorship while finding avenues to help Cubans directly.