A one-time comrade of Fidel Castro and former Cuban political prisoner will be buried Tuesday in Miami after suffering a heart attack.

Mario Chanes de Armas, the Cuban political prisoner who served the longest sentence in modern times and symbolized the struggle for civic freedom in 20th century Cuba, will be remembered today with a funeral service in Miami.

Chanes, 80, who suffered a fatal heart attack Saturday, spent his life in prison and in exile, but no adversity convinced him to halt his quest for a democratic future for his homeland.

Certainly not during the 30 years he spent in prison for opposing the regime of Fidel Castro, his comrade-in-arms during the failed raid on the Moncada army barracks in Santiago de Cuba in 1953.
In the past two years, Chanes' health deteriorated rapidly as a consequence of Alzheimer's disease. His memory failed, and in 2005, he was admitted into an assisted living facility in Hialeah.
Chanes died at Hialeah Hospital, where he had been taken in serious condition. His closest relatives were at his bedside.

''He died with the serenity and peace that accompanied him his whole life through,'' said his sister, Belén López. `He was a marvelous and kind man, willing to help everybody in exchange for nothing, a man of an earlier era.''

Born in the Marianao neighborhood of Havana on Oct. 25, 1926, Chanes took up commerce after graduating from high school.

Because of his leadership abilities, he soon became a labor leader in the Havana areas of Puentes Grandes and Ceiba and later extended his influence as an organizer to other provinces.

He was on his way to becoming an influential figure in Cuban labor circles, when the military coup of March 10, 1952, led by Gen. Fulgencio Batista, forced him to reassess his future.

Chanes gave up his labor work and joined the underground, where he conspired against Batista. That is where he met Fidel Castro, during a meeting with young people opposed to Batista's regime.
''A dear friend of ours, photographer Fernando Chenard Piña, knew a gentleman named Fidel Castro Ruz, and we began to meet in a house at 109 Prado in Havana,'' Chanes recalled during a long interview with El Nuevo Herald in 2003.

Along with Chenard, Chanes became chief of the secret cells that trained young men in the use of firearms, in preparation for the raid on the Moncada barracks on July 26, 1953. Chanes drove in the third car behind Castro and was wounded in the hand before retreating.

Captured days later outside Santiago de Cuba, he was tried and sentenced to 10 years' imprisonment, but he was released in 1955 in a general amnesty to the raiders. He then moved to Miami and worked here as a dishwasher. 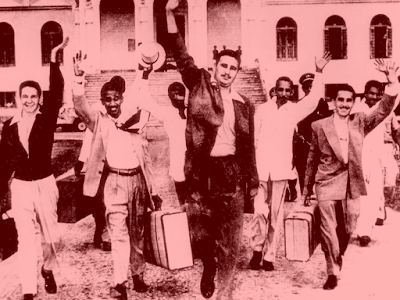 CASTRO CALLS
Not long thereafter, Castro summoned him from Mexico and asked him to join the expeditionaries aboard the yacht Granma. Chanes did not hesitate to take up arms again. On Dec. 2, 1956, he and 81 other rebels landed on the eastern coast of Cuba.

After the failed landing, Chanes managed to reach Havana, where he directed sabotage teams. He was arrested again, and was in prison when the revolution triumphed, on Jan. 1, 1959.
Chanes became disenchanted by the shift in the revolutionary process toward communism and tried to pull away from the circles of power.

On July 17, 1961, he was arrested on charges of conspiring to assassinate Castro and sentenced to 30 years' imprisonment. He always maintained that the charges were fabricated, pointing out that no weapons or compromising documents were ever found in his possession.

`A PLANTADO'
Refusing to accept the routine in prison or even wear prison garb, Chanes identified himself as a plantado -- a disobedient inmate -- until July 16, 1991, when he was released.

He went on to became a tireless activist for the release of Cuban political prisoners and called for the democratization of Cuba at numerous international conferences. Until 2003, Chanes worked actively in the group Plantados, along with other well-known former political prisoners with whom he served time in Cuban prisons.

Chanes took up the banner of peaceful reconciliation among Cubans and vigorously supported all activists who practiced domestic opposition on the island.

Chanes is survived in Miami by his sisters Belén, Mercedes, Aleida and Merceditas. His son, Mario, died in 1984.

Visiting will begin at 5 p.m. today at the Bernardo Garcia Funeral Home, 4100 NW Seventh St., Miami. Burial has been set for Tuesday.

Posted by John Suarez at 2:25 PM No comments: