A long relationship that began while Cuba had normal diplomatic relations with the United States.

President Xi, who is also general secretary of the Communist Party of China Central Committee, exchanged congratulatory messages with Raul Castro Ruz, first secretary of the Communist Party of Cuba Central Committee, and Cuban President Miguel Diaz-Canel to celebrate the 60th anniversary of diplomatic relations between the two communist dictatorships.

In September 1960 the Cuban government diplomatically recognized the Peoples Republic of China. Between 1960 and 1964 the two regimes would collaborate closely together.

Ernesto "Che" Guevara with a Cuban delegation visited Mainland China and met with Mao Zedong, Zhou Enlai, and other high ranking Chinese officials in November 1960 to discuss conditions in Cuba and in Latin America, and the prospects for communist revolution in the Western Hemisphere.

Cuba's relationship with the Soviet Union provided Havana with expertise in biological warfare and biotech that had been denied the Chinese due to the above mentioned split. The Castro regime beginning in the late 1980s began offering that knowledge to their counterparts in Beijing and signed a  formal agreement to produce monoclonal antibodies in 2002.

The two regimes have been working closely together during the COVID-19 pandemic that originated in Wuhan, China in December 2019.  Above is a video presentation given in April 2020 on this relationship.

At the United Nations Human Rights Council on July 1, 2020 the Castro regime took the lead in backing the new security law in Hong Kong that effectively ends autonomy there.

“Our greatest glory is not in never falling, but in rising every time we fall.”― Confucius 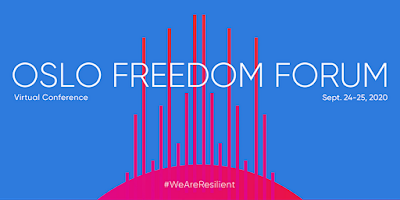 Twelve  years of Oslo Freedom Forums and this year the organizers are demonstrating their resilience and the resilience of the global human rights movement with a free and virtual forum. Register and share with others.

What you need to know
These talks will run from 9:00 a.m. to 12:00 p.m. EDT on September 24 and 25. You can watch live at oslofreedomforum.com and join the conversation on Twitter using the hashtag #OsloFF. 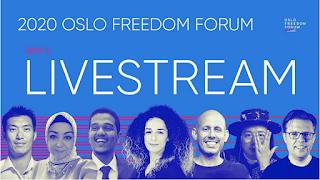 Posted by John Suarez at 7:12 PM No comments:

Translating the rhetoric of the Castro regime at the United Nations Human Rights Council.

Prensa Latina is an official press agency of the Castro dictatorship, but is in reality part of its propaganda apparatus. Below is a story they published on September 18 that needs to be translated for the sake of accuracy.

First, Cuba did not ratify anything, it was an un-elected dictatorship run by the Castro family, that on September 18, 2020 at the United Nations Human Rights Council ratified its support for the dictator of Belarus, Alexander Lukashenko.

Second the Castro regime fails to mention that it is Alexander Lukashenko who is requesting and getting the foreign interference from Vladimir Putin. Mr. Lukashenko also wants Russian police, to terrorize the people of Belarus who have spent weeks protesting the attempted theft of their presidential election by the above mentioned dictator.

This should not be a surprise considering that the Castro regime defended the invasion of Czechoslovakia in 1968 by the Warsaw Pact led by Russia, and the Soviet invasion of Afghanistan in 1980.

Third, what the Castro regime actually fears is that the Human Rights Council will hold it accountable for its crimes against humanity against Cubans and Venezuelans. This is why in the past they ignored ideological considerations and backed the military junta in Argentina, that disappeared over 30,000 Leftists, against an inquiry by the prior UN Human Rights Commission.

BELARUSIAN people are fearless. Dozens of thousands took part in the March of Justice today. Authorities did not let protesters march the planned route. However, people moved their way. In the end, the riot police attacked the participants. Hundreds are detained pic.twitter.com/vWszNVSR4N

There is a danger both for the Castro regime and Vladimir Putin to confuse the dictator, with the aspirations of the people of Belarus. We have not and will not. We stand with Belarus and in solidarity with the people seeking their freedom and sovereignty.

Cuba expresses support for Belarus at the Human Rights Council 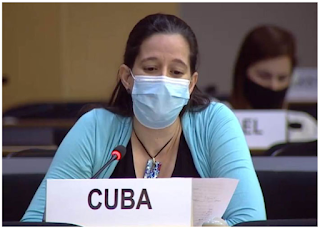 Geneva, Sep 18 (Prensa Latina) Cuba ratified on Friday its support for the people and government of Belarus and its legitimate President Alexander Lukashenko in a session of the UN Human Rights Council convened to attack that country.
'We energetically reject foreign interference against the sovereignty and self-determination of that sister nation,' assured Cuban diplomat Lisandra Astiasaran during an urgent debate on the human rights situation in Belarus, where the West is committed to destabilization.

According to Astiasaran, Cuba repudiates the imposition of this type of selective initiatives, directed against sovereign governments and with clear political motivations.

'We are facing an obvious attempt to use the Human Rights Council to legitimize a coup in a sovereign nation, and to advance the interventionist agenda of the United States and some of its allies,' she denounced.

In this regard, she warned that on Friday's debate and the resolution that accompanied it represent new signs of politicization and double standards that prevail in handling the issue of human rights.

Such a stance will only ensure that the Council's credibility continues, she noted.

rly/omr/ga/wmr
Posted by John Suarez at 4:49 PM No comments:

Call for Help: Canadian prisoner in Cuba denied medical care for months despite begging Cuban prison officials to let him see a doctor

Sister asks "what is the Canadian government waiting for? body bags?"

Canadian born citizen Benjamin Tomlin jailed in Cuba was able to make a call out of prison begging for medical care denied him by Cuban prison officials.  His sister Caroline Simpson who has been campaigning for his release made it available and in the e-mail with the audio declared: "This is appalling,  my brother has been begging to see a doctor for months,  why isn’t the Canadian government doing anything to bring the prisoners home while they will be safe. What are they waiting for? Body bags?"

Ms. Simpson added that "this has become a humanitarian cause now, these Canadians need to be returned home before it is too late. We can no longer wait for political niceties and formalities we need to save these men’s lives NOW because they are in serious danger."

"The Cuban government is not respecting the UN Standard Minimum Rules for the Treatment of Prisoners (the Nelson Mandela Rules) that under rule 24 states:"The provision of health care for prisoners is a State responsibility. Prisoners should enjoy the same standards of health care that are available in the community, and should have access to necessary health-care services free of charge without discrimination on the grounds of their legal status," in the case of Benjamin Tomlin, who is suffering great pain, cysts, and deteriorating health. Friends and family are concerned about his health and fear for his life, because he has not been provided adequate medical care for months.

Benjamin Tomlin has been detained in Cuba since August 2018 when he was charged with sexual misconduct. On March 29, 2019, following a trial which stripped the defendant of his basic human right – the right to fair and equitable hearing by an independent and impartial tribunal – he was convicted and sentenced to 10 years imprisonment.

On August 28th, 2019, the Supreme Court of Cuba rejected his appeal, the same day that various Canadian newspapers and media, including CBC News, published articles about Mr. Tomlin’s incarceration in Cuba.

Beginning with his arrest through to his trial and sentencing, Benjamin Tomlin’s case has been plagued with judicial irregularities. Tomlin's rights have been consistently violated since his arrest: he was prevented from speaking to his lawyer; refused consular assistance; and was forced to sign documents, under duress, that he did not understand.  Benjamin Tomlin continues to maintain his innocence and claims to be the victim of people who robbed him.

In 2005, Benjamin was in an accident from which he was expected to be a quadriplegic. To the surprise of his doctors, he was able to regain movement in his limbs but continues to this day to experience severe chronic pain and transient paralysis for which he had stayed medicated following the accident. In addition, Mr. Tomlin was also diagnosed with poly cystic kidney disease in his mid-twenties.

Mr. Tomlin is presently in excruciating pain as the required medication is not being provided to him. His physical health is deteriorating, not to mention his mental health. Although friends and family do what is in their power to ensure that the medication gets to his Cuban prison, it is being stolen by the prison guards thus it rarely gets to him.

Most recently friends and family have been informed that in addition to chronic pain from his accident and his worsening mental health, Benjamin Tomlin is now experiencing symptoms of his poly cystic kidney disease. He has been extremely ill and was unable to move from his bed for several days due to excruciating pain. He requested medical attention but was told it was unavailable due to the current fuel crisis in Cuba.

Furthermore, he was subject to a disciplinary hearing before the prison colonel for “disrespect” for having insisted that he receive medical attention.

Will you take the pledge? I did.

The U.S. National Archives are presenting citizens with the opportunity to sign the founding documents of the United States.

Happy #ConstitutionDay! Now you can sign your name to a virtual version of the #Constitution on our website:https://t.co/Y2izZ3LIpe pic.twitter.com/NjfjbYYX45

September 17, 1787 was a great day for ordered liberty when the U.S. Constitution was signed and 233 years later it is a great day to reflect on this important document and to celebrate the civilization it gave rise to.

Today some will revere the Constitution as a sacred text, while others will condemn it, but how did one of the actual signers view it at the time? Benjamin Franklin, during a speech in the Constitutional Convention, Philadelphia, Pennsylvania (September 17, 1787); reported in James Madison, Journal of the Federal Convention, ed. E. H. Scott (1893), p. 742:


In these sentiments, Sir, I agree to this Constitution, with all its faults, — if they are such; because I think a general Government necessary for us, and there is no form of government but what may be a blessing to the people, if well administered; and I believe, farther, that this is likely to be well administered for a course of years, and can only end in despotism, as other forms have done before it, when the people shall become so corrupted as to need despotic government, being incapable of any other.

The author of the Declaration of Independence, Thomas Jefferson, observed in a fair copy of the drafts of the Kentucky Resolutions of 1798:


"In questions of power, then, let no more be heard of confidence in man, but bind him down from mischief by the chains of the Constitution."

Today is also a good day to re-read the Constitution and remind ourselves as citizens that we must hold the politicians accountable in order to preserve liberty and avoid despotism. Furthermore that over time amendments have been necessary to cautiously improve on the original document.

However, now that the revolutionaries are out attempting to discard this legacy of liberty it is time to stand up and be counted. Sign the document and upload it for others to see. Let me be clear,  my loyalty is to the U.S. Constitution and the rule of law and I pledged my life, my fortune, and my sacred honor to the cause of freedom. 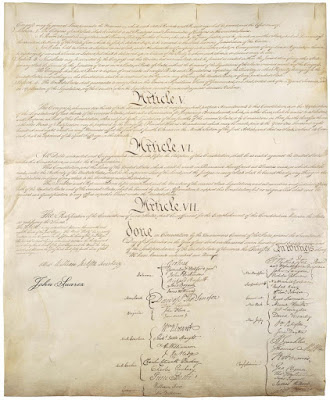 Posted by John Suarez at 9:19 PM No comments: