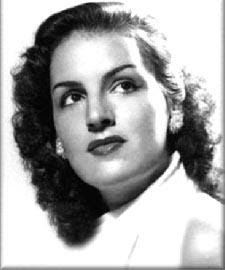 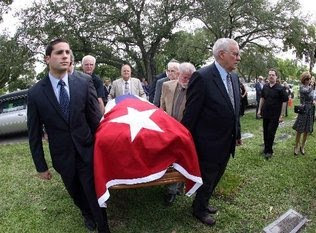 Cuban democracy ended on March 10, 1952 with Fulgencio Batista's coup and 58 years later it has still not returned. Sadly as the years pass and those who lived those glory years of democracy leave us they begin to be viewed as myth. Add to that the current dictatorship's rewriting of history to diminish this democratic age in order to justify its own tyrannical rule and one can understand how the world would forget Cuba's own democratic chapter. 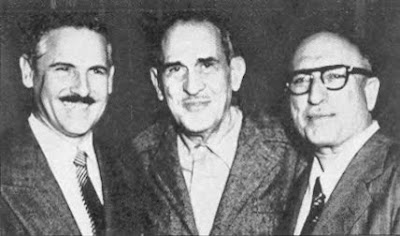 Carlos Prío Socarras, Ramon Grau San Martin, Carlos Hevia
Yet there is one witness who spoke out on behalf of the Republic on October 16, 1953 that the tyranny cannot ignore: Fidel Castro. During his trial for the July 26, 1953 armed assault on the Moncada Barracks he addresed the court and described Ramon Grau's and Carlos Prío's presidencies:

Once upon a time there was a Republic. It had its Constitution, its laws, its freedoms, a President, a Congress and Courts of Law. Everyone could assemble, associate, speak and write with complete freedom. The people were not satisfied with the government officials at that time, but they had the power to elect new officials and only a few days remained before they would do so. Public opinion was respected and heeded and all problems of common interest were freely discussed. There were political parties, radio and television debates and forums and public meetings. The whole nation pulsated with enthusiasm. This people had suffered greatly and although it was unhappy, it longed to be happy and had a right to be happy. It had been deceived many times and it looked upon the past with real horror. This country innocently believed that such a past could not return; the people were proud of their love of freedom and they carried their heads high in the conviction that liberty would be respected as a sacred right. They felt confident that no one would dare commit the crime of violating their democratic institutions. They wanted a change for the better, aspired to progress; and they saw all this at hand. All their hope was in the future.

President Carlos Prío Socarras and his wife Mary Tarrero de Prío went into exile in Miami, but his struggle for a democratic Cuba did not end there. He would be arrested on more than one occasion accused of smuggling arms to rebels in Cuba seeking to overthrow Fulgencio Batista.

According to Ramón L. Bonachea and Marta San Martin in their book The Cuban insurrection, 1952-1959 in August of 1956, Fidel Castro and Carlos Prío met at a small hotel in McAllen, Texas where for over an hour they discussed the future of the insurrection against Batista. Castro asked Prío for money and the former president agreed to finance Castro’s expedition to Cuba. Prío would send the Cuban guerrillas almost one quarter of a million dollars in arms and money. Prío got other associates to contribute thousands of dollars more in cash to the guerrillas.

The last constitutional president of Cuba had publicly announced his plan to return to the island as early as 1955 and did so during a brief "amnesty" in 1956 only to be expelled at gun point a short time later and would return again in January 1959 with Fulgencio Batista's departure into exile. Only to depart for exile again in December 1960 as they saw the new government turning into a military dictatorship. 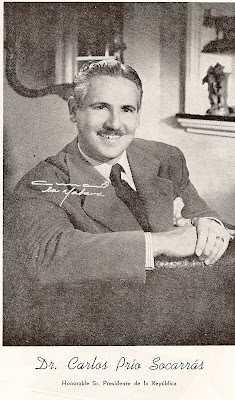 On June 11, 1961 Carlos Prío Socarras addressed 1,200 Cubans in exile and pledged to aid the Cuban underground. He would go on to aide and plan efforts to combat Castro's military dictatorship as he had done earlier against Batista.

As the 1960s drew to a close and the armed struggle against Castro's dictatorship drew to a close Carlos Prío in 1973 sought to preempt efforts at a negotiated solution in which democratic Cubans were not participants boldly proposing that Cuban exiles seek to insert themselves in the dialogue taking place between Nixon and Breshnev and negotiate the island's future. The proposal was met with wariness and opposition going no where.

Carlos Prío Socarras died from a self-inflicted gun shot wound on April 5, 1977 in his garage in Miami. Carlos Prío from his youth battling the Machado dictatorship as a University student in the 1930s to his later struggles against Batista in the 1950s and Castro in the 1960s and 70s he spent a life struggling against dictatorship of all ideological tendencies. Seeing the destruction of Cuba and the suffering of the Cuban people led him to despair. 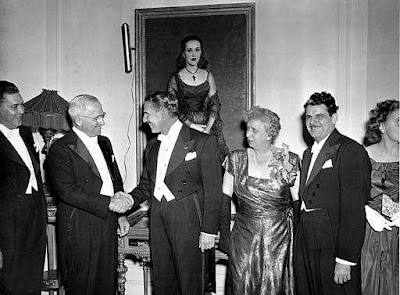 As we remember Mary Tarrero de Prío who "never completely recovered" from her husband's death we can say a prayer for her, Carlos Prío Socarras and their family remembering the price they paid for Cuban freedom and ensure with the continued efforts of Cuban democrats that those sacrifices not be in vain. Here is one historian's take on the presidency of Carlos Prío Socarras:

They were a time of constitutional order and political freedom. They were not 'golden years' by any means, but in two elections (1944 and 1948), Cubans had the opportunity to express their desire for a rule of civil liberties, primacy of Cuban culture, and achievement of economic independence. If there were sharp contradictions in Cuban society under the Autenticos, the circumstances differed only in degree from the complexities and dynamics encountered in free societies everywhere. 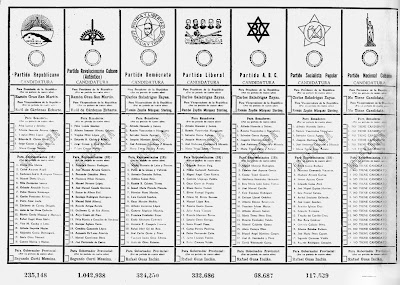 Sample ballot from 1944 Cuban elections in which different political parties vied for power. The last democratic presidential elections were held in 1948 and won by Carlos Prío Socarras.