Wake in Cuba and Vigil in Miami for Oswaldo Payá 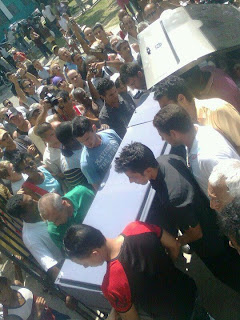 About 400 people received the mortal remains of Cuban opposition leader Oswaldo Paya with a standing ovation and applause that lasted for ten minutes in the parish of Havana where the wake started for the prominent activist, who will be buried Tuesday.

In an atmosphere charged with emotion and between shouts of "Vivas" for Paya and the "Varela Project", the chapel of Paya was installed in the parish of El Salvador del Mundo, in the neighborhood of the Cerro and was the Church  which Payá used to attend regularly. There waited for several hours the family of the deceased, friends, the main representatives of the dissidents on the island and several diplomats for the coffin to arrive.

The auxiliary bishop of Havana, Juan Hernandez, officiated a dirge in memory of the late opposition leader and many of the attendees shouted "freedom" after singing the Cuban national anthem. Paya's widow, Ofelia Acevedo, took the floor to thank the support of the audience but asked for silence and prayer in the last goodbye to Paya.

According to religious sources, Cardinal Jaime Ortega will officiate at the funeral for Oswaldo Paya  tomorrow morning and that will be followed by burial at Colon Cemetery in Havana.

During the wake for Oswaldo Paya cries of "freedom" also erupted inside the Church and were tweeted onto the internet.

In Hialeah tonight members of the Christian Liberation Movement organized a vigil for Oswaldo Paya and MCL youth leader Harold Cepero. Family members, including Oswaldo Paya's older brother, were also present. Former prisoners of conscience imprisoned in 2003 for their role as organizers of the Varela Project were also on hand to pay their respects.


In Miami and in Spain there will also be services held in memory of Oswaldo Paya and Harold Cepero. A Mass will be held for them in Miami at Our Lady of Charity, in 3609 South Miami Ave., Miami, FL 33133 at 8pm tonight EST (Tuesday). In Spain it will be at 8:40pm local time in the Church of  San Fermin de los Navarros, in P Eduardo Dato, 10 28010 Madrid.

Text translated with minor changes and additions from Libertad Digital on events in Havana: http://www.libertaddigital.com/mundo/2012-07-23/gritos-de-libertad-en-el-entierro-de-paya-1276464552/
Posted by John Suarez at 5:46 PM