“I have …wondered at times if we did not pay a very great price for being more energetic than wise about a lot of things, especially Cuba.” – Robert Kennedy  (1968) 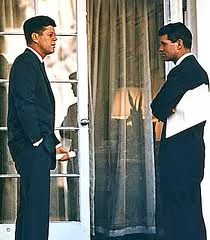 Fifty years ago today on November 22, 1963 around 12:30pm the Kennedys in their convertible limousine turned off Main Street at Dealey Plaza in Dallas, Texas. As they were passing the Texas School Book Depository, President John F. Kennedy was shot twice and slumped over toward Mrs. Kennedy. The governor of Texas was also hit. At 1:00pm President Kennedy was pronounced dead.

On the eve of the 50th anniversary the Cuban Interests Section in Washington D.C. tweeted three times on November 21, 2013 at 9:47am, at 5:09pm and finally at 7:19pm the same message: "No Cuban official was involved in JFK's assassination, Fidel Castro told The Atlantic" 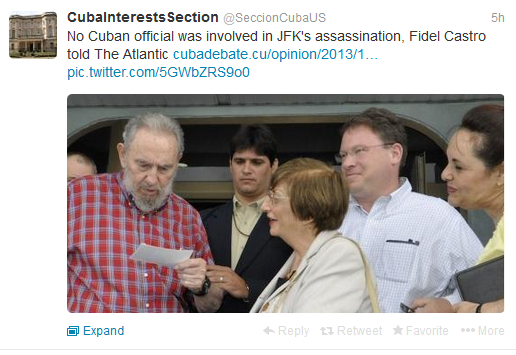 Jeffrey Goldberg of The Atlantic had published a new article a day earlier from a three year old interview with Fidel Castro in which the Cuban dictator not only denies involvement in the assassination but argues that "Oswald could not have been the one" while backing Oliver Stone's version of events. Goldberg is the same journalist who discounts the Castro regime's history of terrorism.

Furthermore, the Atlantic Journalist fails to address new information involving the Castro regime and the assassination of President Kennedy.  According to Brian Latell, who was the chief CIA officer in Latin America and a Cuba specialist, in his 2012  book, Castro's Secrets: The CIA and Cuba's Intelligence Machine,:


"On the morning of the day the president was killed, Fidel Castro ordered a senior intelligence officer in Havana to stop listening for non-specific CIA radio communications and concentrate instead on 'any little detail, any small detail from Texas, ...Four hours later, the airwaves came alive with news that Kennedy was dead."  Latell concludes that "Fidel knew of Oswald’s intentions and did nothing to deter the act."

However in the midst of Goldberg's puff piece for Castro an important piece of information was revealed.

"Fidel reserved his animus mainly for Robert Kennedy, who was attorney general in his brother’s administration and loathed Fidel and his revolution. It was Robert Kennedy, Fidel believes, who was behind U.S. plots to have him assassinated."

Arthur Schlesinger revealed in his book on Robert Kennedy, the Attorney General's commitment to overthrowing the Castro dictatorship quoting him from a November 1961 meeting:


"My idea is to stir things up on island with espionage, sabotage, gender disorder, run & operated by Cubans themselves with every group but Batistaites & Communists. Do not know if we will be successful in overthrowing Castro but we have nothing to lose in my estimate."

Yesterday in an interview with former CIA operative Eugenio Rolando Martinez the elderly Cuban exile placed into context Fidel Castro's frame of mind in November of 1963. Castro felt isolated and betrayed by his Soviet allies during the Cuban missile crisis of October 1962 and had operational knowledge of efforts of the Kennedy Administration to overthrow his dictatorship and plots to have him assassinated.

On November 12, 1963 in a White House memorandum the continued commitment of the Kennedy Administration to pursue an aggressive policy to overthrow the Castro regime is clear:

(f) Support of Autonomous Anti-Castro Groups. The question was asked from where would the autonomous groups operate. Mr. FitzGerald replied that they would operate from outside U.S. territory. He mentioned two bases of the Artime group, one in Costa Rica and the other in Nicaragua. Also it was hoped that the autonomous group under Manolo Ray would soon get itself established in a working base, possibly Costa Rica. Mr. FitzGerald said that much could be accomplished by these autonomous groups once they become operational.
A question was asked as to what decisions remain to be made. Mr. FitzGerald replied that we were looking for a reaffirmation of the program as presented, including sabotage and harassment. When asked what was planned in sabotage for the immediate future, he said that destruction operations should be carried out against a large oil refinery and storage facilities, a large electric plant, sugar refineries, railroad bridges, harbor facilities, and underwater demolition of docks and ships. The question was also raised as to whether an air strike would be effective on some of these principal targets. The consensus was that CIA should proceed with its planning for this type of activity looking toward January.

Following the assassination of President Kennedy within a year these operations were mothballed and Fidel Castro would remain in power for the next five decades. Is there anyone else who benefited more from the events of November 22, 1963 and of June 6, 1968?
Posted by John Suarez at 2:01 AM