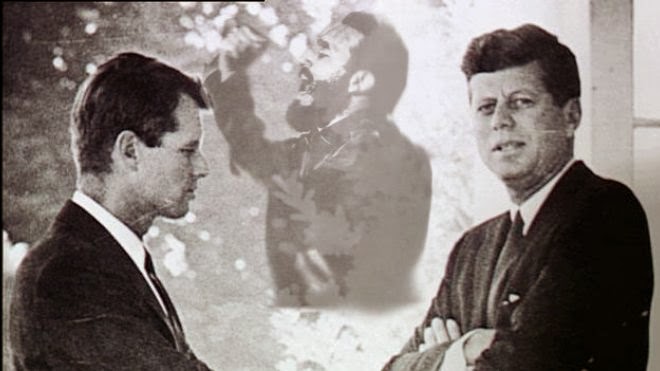 What Oliver Stone refuses to tell you about the Kennedy assassination.

As the 50th anniversary of the assassination of John Fitzgerald Kennedy approaches the spin doctors and agents of influence have already begun to cloud the circumstances leading up to the murder of America's 35th president. However, a question that needs to be asked looking back a half century later: who benefited most from his death?

Recent revelations indicate that Cuban intelligence officials had indeed met with Lee Harvey Oswaldo and that Fidel Castro had prior knowledge that John F. Kennedy would be assassinated in Dallas on November 22, 1963 but the author, former national intelligence officer for Latin America, Brian Latell does not go as far as to say that the Cuban dictator orchestrated the assassination. However, a respected German documentary filmmaker Wilfried Huismann says that Castro was behind the killing of the 35th president:


We settled the question of why in three years of research on this documentary in Mexico, USA and Cuba. Oswald had been an agent for the Cuban intelligence services since November 1962. He was a political fanatic and allowed himself to be used by the Cuban intelligence services to kill John F. Kennedy. It was a Cuban reaction to the repeated attempts of the Kennedy brothers, above all the younger Kennedy, Robert, to get rid of Fidel Castro through political assassination -- a duel between the Kennedys and the Castros, which, like in a Greek tragedy, left one of the duelists dead.

Oliver Stone, and other apologists and defenders of Fidel Castro, would point the finger at a military coup d'état led by Vice-President Lyndon Baines Johnson who became the 36th president of the United States. At the same time they claim that President Kennedy was seeking a rapprochement with Fidel Castro that angered anti-Castro and anti-communist elements that participated in the conspiracy to murder President Kennedy. They also claim that Lee Harvey Oswald was a "patsy" and innocent of the crime for which he was arrested. Fidel Castro is quoted at the time of speaking well of Kennedy and that Khrushchev had indicated to him that he was a man one could talk with. Years later Fidel Castro reasserted that it would have been insane for him to have been involved in Kennedy's assassination.

What they fail to mention was that Castro asked Khrushchev in a letter dated October 26, 1962 to launch a preemptive nuclear strike on the United States and the Cuban dictator became enraged when the Soviet leader backed down and struck a deal with the United States without including the Cubans in the negotiations.  George Anne Geyer in her book Guerilla Prince describes in greater detail Fidel Castro's reaction to the missiles being pulled out of Cuba:


As the missiles were leaving his island, Castro's tongue exploded with every scatological and cursing word he could grasp for. He railed at Khrushchev to the editors of Revolucion, screaming, "Son of a bitch! Bastard! Asshole!"Later he would call Khrushchev a "maricon"or homosexual.

Relations between the Castro regime and the Soviet Union cooled for a time and the Cuban tyrant reached out to former Nazis and right wing German elements for training and weapons. Following the Bay of Pigs debacle in April of 1961 the Kennedy brothers initiated Operation Mongoose. President Kennedy's brother and Attorney General of the United States, Robert Kennedy, headed up the sustained effort to topple the Castro regime and this included the assassination of Fidel Castro. Coincidentally, Operation Mongoose operations were phased out after the assassination of President Kennedy and the departure of Robert Kennedy from his position as Attorney General in September of 1964. 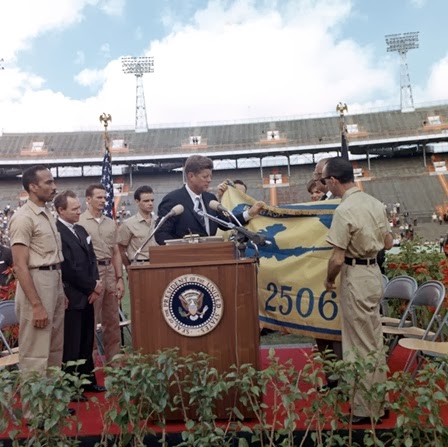 Stone and others who point the finger at Cuban exiles also fail to mention President Kennedy's December 29, 1962 visit to the Orange Bowl where he addressed Cubans exiles, received the flag of Brigade 2506 pledging to return it to them in a free Cuba. They also fail to mention that Cuban exiles had other strong allies in the Kennedy Administration, chief among them Attorney General Robert Kennedy, the president's brother.  Following President Kennedy's assassination they would never again have as much support to overthrow Castro as provided by that Administration.

John Simkin, an unreconstructed leftist, provides a timeline for an assassination attempt against Fidel Castro initiated in September of 1963 with the instruments for the killing of the Cuban dictator handed to a double agent on November 22, 1963, the very day President Kennedy was killed:


In September, 1963, Cubela ( a double agent working for Castro to infiltrate U.S. intelligence) had a meeting with the CIA in Sao Paulo, Brazil. It was suggested that Cubela should assassinate Fidel Castro. According to a CIA report Cubela asked for a meeting with Robert Kennedy: "for assurances of U.S. moral support for any activity Cubela under took in Cuba." This was not possible but FitzGerald, now Chief of the Cuban Task Force, agreed to meet Cubela. Ted Shackley was opposed to the idea as he was now convinced that Cubela was a double-agent.

Desmond FitzGerald and Nestor Sanchez met Cubela met in Paris on 29th October, 1963. Cubela requested a "high-powered, silenced rifle with an effective range of hundreds of thousands of yards" in order to kill Fidel Castro. The CIA refused and instead insisted on Cubela used poison. On 22nd November, 1963, FitzGerald handed over a pen/syringe. He was told to use Black Leaf 40 (a deadly poison) to kill Castro. As Cubela was leaving the meeting, he was informed that President John F. Kennedy had been assassinated.

Taking into consideration all of the above and the aftermath of the Kennedy assassination which included the end of the U.S. government program to overthrow Fidel Castro and the sidelining of Robert Kennedy from government. ( This should also raise questions about the motives behind the younger Kennedy's assassination on June 5, 1968 at the hands of the Palestinian Sirhan Bishara Sirhan.) The Castro regime had (and still has) close relations with the Palestinian Liberation Organization and other Middle-Eastern terrorist organizations providing them training in Cuba.  Consider for a moment who could have more to lose in a Robert Kennedy presidency than Fidel Castro?

Cuban intelligence had the means

The coverup and aggressive misinformation campaign surrounding the assassinations of both John and Robert Kennedy is reminiscent of other campaigns carried out by Cuban intelligence and their mentors the East German intelligence service also known as the Stasi.

In 1967 in West Berlin an unarmed left wing demonstrator was killed by a police officer in what became known as “the shot that changed the republic.” The 1967 killing put conservative West Germany on the defensive and led the country to tilt towards social democrats in 1969 who took a softer line on East Germany. Thirty two years later the German police officer was unmasked as a Stasi spy.  This Stasi trained the Cuban intelligence service and provided them with trade craft to sucessfully be able pull off both active measures and shaping public opinion to neutralize negative blow back.   The United States also has a long history of underestimating the Cuban intelligence services over the past 50 years.

The Castro regime had the motive, the opportunity and the means to assassinate both Kennedy brothers and cover it up.