"What I fear most is power with impunity. I fear abuse of power, and the power to abuse." - Isabel Allende
The Third Committee of the United Nations General Assembly on December 18, 2013 passed by consensus a resolution on the safety of journalists and the issue of impunity. The resolution includes a call to make the International Day to End Impunity an official UN day, to be commemorated each year on 2 November. Today is the first time it is being observed.


On the Inaugural International Day to End Impunity for Crimes Against Journalists, IFEX asks:


If killing journalists is killing the messenger, what message are governments sending when their killers get away with it?

Ending impunity for crimes against journalists, media workers and others is a critical priority for the 88 civil society groups that compose IFEX, the global network that defends and promotes freedom of expression.

On this day wish to remember one case of an independent journalist who went missing in Cuba more than ten years ago and who had received threats from state security. His family following his disappearance in December 2003 was intimidated into silence. His name is Omar Darío Pérez Hernández.

Omar can be seen briefly in a video conducting an interview with students expelled from university for signing the Varela Project. One of the youths interviewed Harold Cepero would die on July 22, 2012 alongside Oswaldo Payá Sardiñas in circumstances that would lead one to believe they were murdered by state security. 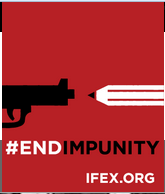