“Those who falsify history do not protect the freedom of a nation but, rather, constitute a threat to it.” – Vaclav Havel, The Salzburg Festival, July 26, 1990 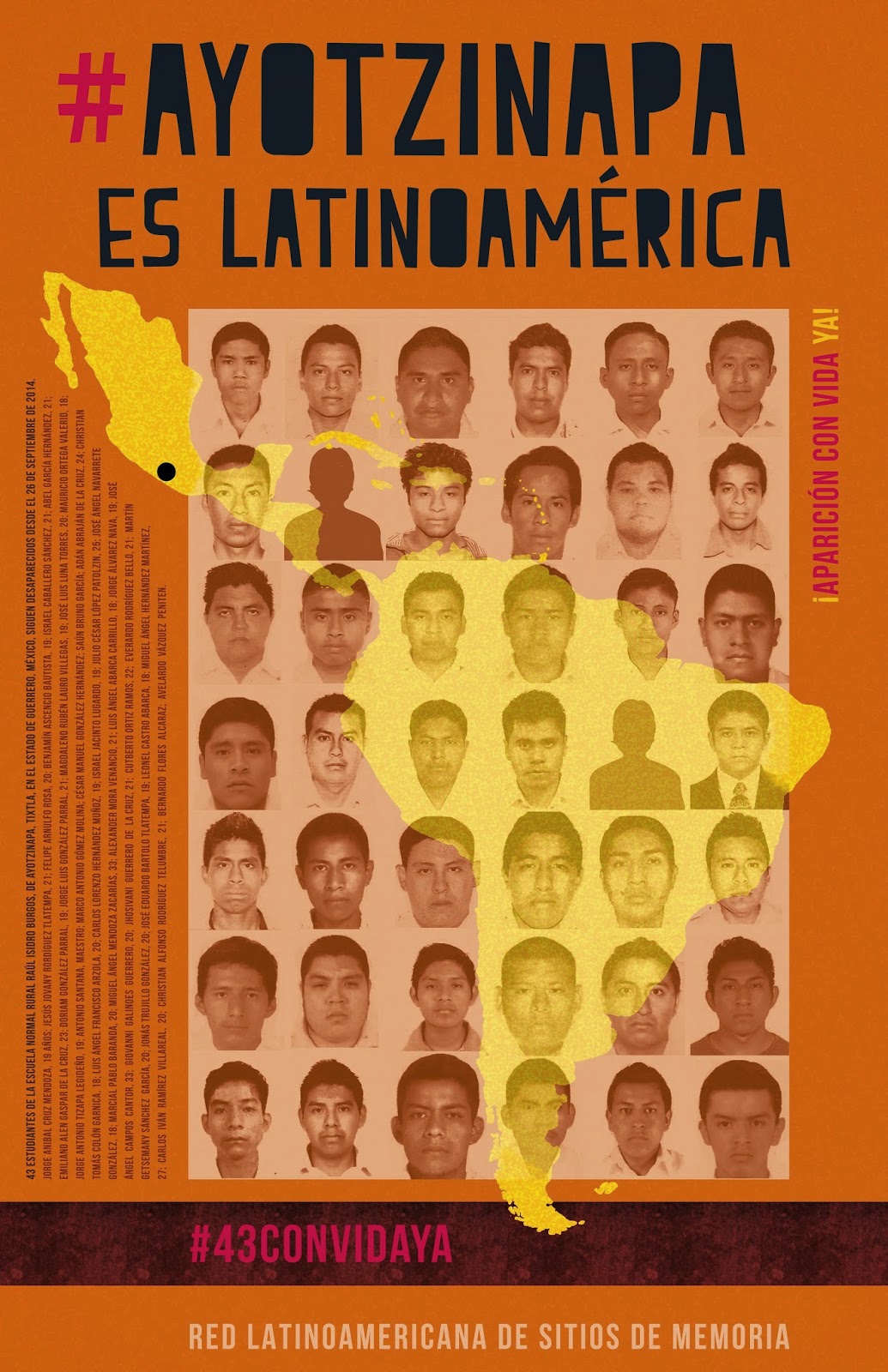 The situation in Mexico demands concrete attention and actions in the hopes that a resolution can quickly be reached such as:
Meanwhile efforts by political partisans to take advantage of the situation to advance a particular agenda needs to be quashed while truth and justice serve as a guide to action on behalf of the 43. For example,  Venezuelan Analysis republished an article of Tamara Pearson of the Venezuela and Cuban sponsored television network TELESUR titled 43 Lives, 2 Countries slandering the victims of the Maduro government killed during anti-government protests in 2014 while at the same time failing to mention that in the case of the 43 disappeared students in Mexico the government officials identified as having colluded with a drug gang in taking the students are members of a left wing political party with ties to both Venezuela and Cuba.

Both Mexico and Venezuela are in the grips of waves of violence that have claimed tens of thousands of lives. Mexico with a population of 122.3 million according to the preliminary numbers published by the National Statistics Institute, (Inegi) had 22,732 homicides in 2013, equivalent to 22 per 100,000 inhabitants.  Meanwhile, Venezuela with a population of 30.41 million according to the Venezuelan Observatory on Violence, estimates that 24,000 people were murdered in 2013, according to the United Nations and the World Bank the number per capita is 54 per 100,000 inhabitants and is considered the second most likely place to be murdered on the planet with Honduras in first place. The bottom line on murder rates is that you are 2.5 times more likely to be murdered in Venezuela than in Mexico.

However, the questions surrounding the 43 Venezuelans and 43 Mexicans murdered in a political context in 2014 resonate in both countries and raise fundamental questions of governance.

The mayor of Iguala, José Luis Abarca, and his wife Maria de los Angeles Pineda are suspected of ordering the disappearance of 43 students which took place on September 26, 2014 and colluding with a drug gang called Guerreros Unidos (United Warriors) who allegedly murdered the students.  The governor of Guerrero state, Angel Aguirre has taken a leave of absence due to growing criticism over his role in the affair. Both the mayor and governor are members of the Party of the Democratic Revolution (PRD). Leaked diplomatic cables of the U.S. embassy in Mexico indicate that the Mexican president Calderon believed that Hugo Chavez's government had secretly funded the PRD candidate's election in 2006.  The PRD also has good relations with the Cuban dictatorship.

Since February 12, 2014 forty three Venezuelans have been killed during protests against rising insecurity and vanishing rights in their country. Over 5,000 have been injured and 3,000 arbitrarily detained. Among them is the opposition leader Leopoldo Lopez who advocated for nonviolent protests and remains arbitrarily detained despite the UN Working Group on Arbitrary Detention on August 26, 2014 calling for his immediate release.The students shot and killed in the demonstrations by government soldiers and paramilitaries that work with the Maduro government.

The pattern of conduct and impunity that took place in Venezuela and Iguala with their respective 43 students is troublingly similar. A government official unhappy with student protesters orders troops to put down their demonstration and uses non-government para-military groups as shock troops to terrorize nonviolent students. This includes unarmed Venezuelan students shot and killed at point blank range. The difference between what happened in Mexico and in Venezuela is that in the Mexican case it is a local official while in the Venezuelan case national officials are involved.

What happened in Venezuela?
The series of events that sparked the student demonstrations in Venezuela began in Táchira on February 4, 2014 when a student at the University of Los Andes in the Botanical Garden of the University was the victim of an attempted rape. Students protested that "insecurity had taken over the campus." The protest was repressed and a number of students arrested and physically mistreated by the authorities. The news of the abuse by government officials sparked additional protests.

The February 10th open letter tweeted by student leader Juan Requesens, who has more than 528,000 followers the message is one that is open to dialogue with the government on two conditions 1) that students who were arrested exercising their legitimate right to protest be freed and 2) that calling them "coup plotters" or "terrorists" for engaging in nonviolent protests to demand their rights is unacceptable.

February 12 in Venezuela is a national youth day and students across the country organized nonviolent mass demonstrations in response to the earlier repression and were met with violence by regime officials working in coordination with paramilitary groups known as "colectivos." Students were shot in the head and killed. This escalated the protests and as the violence increased the demands expanded and began to focus on Maduro. These facts are conveniently ignored by Ms. Pearson in her article.

What happened in Mexico?
Students trashed City Hall in Iguala in 2013 after the slaying of a leftist social activist. Iguala is located 80 miles south of Mexico City in the state of Guerrero. The murdered activist's widow, Sofia Mendoza, a City Council member, blames Mayor Abarca for that killing. The Mayor and his wife, Maria de los Angeles Pineda, were believed to have ordered local police to intercept and do away with the students who were en route to Iguala and might have disrupted a party and speech by Ms. Pineda on September 26, 2014 and were attacked before reaching their destination: six were killed, 25 were wounded and 43 went missing and have not been seen again.

More than 50 people have been arrested in connection with the disappearances, the majority of them police officers or members of the local drug gang Guerreros Unidos, all of whom authorities say were working together. It now appears that the mayor's wife, Pineda was the “principal operator” of Guerreros Unidos in Iguala.

The governor, Angel Aguirre, took a leave of absence because of the scandal, which has also handed President Enrique Peña Nieto his worst crisis during his presidency. Several top leaders of the left who had given Abarca their support have now distanced themselves from the tainted mayor.

The Mexican government is saying that those arrested have admitted to killing the students and burning their remains. Family members are questioning the official version as one parent stated: "We are not going to believe anything until the experts tell us: You know what? It is them,"

International Coverage
Searching Google 212 reports mention protesters killed in Venezuela versus 220 reports mentioning 43 students killed in Mexico. Unfortunately, the campaign by Maduro apologists to slander the student movement in Venezuela while restricting the access of independent international human rights organizations to investigate what has taken place in Venezuela in stark contrast to the cooperation by the national Mexican government welcoming the Inter-American Commission on Human Rights to investigate and not expelling or demonizing human rights organizations such as Human Rights Watch.


From Military Dictators to Populists

Forty years ago military dictatorships in Latin America were murdering left wing students and in 2014 in Venezuela and Mexico populist left wing politicians are using police, para-militaries and gangs to murder left wing students who do not obey them. One constant during these 40 years is that the dictatorship in Cuba has had and continues to have good relations with regimes that murder students.