"Since I am a Tibetan, I have always been sincere and devoted to the interests and well-being of Tibetan people. That is the real reason why the Chinese do not like me and framed me. That is why they are going to take my precious life even though I am innocent." - Tenzin Delek Rinpoche 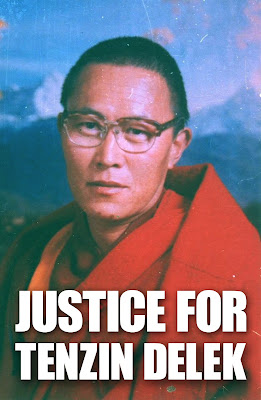 Back on April 7, 2015 this blog echoed the call for Tenzin Delek Rinpoche to be granted medical parole after his health declined on the 13th year of an unjust 20 year prison sentence. On July 12, 2015, just a little over three months later Chinese authorities informed his family that this Buddhist monk and political prisoner had died in prison but did not specify the circumstances surrounding his death nor returned the remains to his loved ones. His cousin Geshe Nyima said in a statement:


"Tenzin Delek Rinpoche was an innocent monk who suffered over 13 years of unjust imprisonment, torture and abuse in a Chinese prison for simply advocating for the rights and well-being of his people and for expressing his devotion to His Holiness the Dalai Lama. ... "The Chinese government must immediately release his body so that our family and community may perform the last Buddhist religious rites".

Students for a Free Tibet is requesting that people of good will request the following of their respective government:


1. Demand a public inquiry into the circumstances of Tenzin Delek Rinpoche's death. He was a political prisoner at the top of the priority listing for a number of countries and his passing must be officially acknowledged and the causes investigated.

2. Appeal to your Chinese counterparts that Tenzin Delek Rinpoche's body is returned to his family so that they can carry out final Tibetan Buddhist religious rites.

3. Express strong condemnation at the passing of Tenzin Delek Rinpoche; and convey to China its concern that he was sentenced in secrecy for a crime he did not commit, and China's failure to respond to the application for medical parole.

Student activists stormed the Chinese consulate in New York City on July 13th demanding that his body be returned to his family so that they be able to perform "the last Buddhist religious rites." Take action here and petition your government to demand that the Chinese dictatorship do the right thing then share the link with others. The international community must speak out or risk being morally complicit by its silence.