Lilian Tintori, the wife of Venezuelan opposition leader and prisoner of conscience Leopoldo Lopez, testified this week before the UN Human Rights Council. 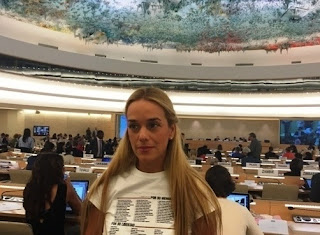 
My name is Lilian Tintori and I am Venezuelan. I have the honor to make this declaration on behalf of UN Watch.

Article 2 of the Durban Declaration prohibits all forms of discrimination, including discrimination based on political or other opinions.

I am here for all the names I have on my chest and my back. They are tortured, persecuted and killed. My husband Leopoldo Lopez, opposition leader in Venezuela, unjustly in jail, is only one of many cases. I speak in his name and in the name of all those silenced, like Geraldine Moreno, assassinated in close range, and Jose Manuel Carrasco, raped with a weapon in his anus, both by state security forces.

My husband Leopoldo is in jail for speaking out against the human rights violations that occur in our country, the right to life is violated every 20 minutes, homicides last year were above 25,000, inflation, medicine and food scarcity is more that 72%. Leopoldo has been in jail for 16 month, 9 of which in solitary confinement, with inhuman treatment and torture. In 2014, there were more than 3700 arbitrary detentions. I am here as a wife, as a mother that is raising her two children alone.

My husband and opposition leaders are in jail for demanding democratic change through constitutional, non-violent methods. They have not committed any crime. The UN Working Group on Arbitrary Detention determined that Leopoldo had been detained in violation of international law, as did the Committee Against Torture, the High Commissioner and the Special Rapporteur Against Torture.

The Venezuelan government must respect the rights of all people. Today there are 75 political prisoners that should be liberated. Isolation should stop. The Tumba, a white torture center, has to be closed. The Red Cross should have access to prisons and we have to put an end to impunity.

Venezuela continues to be a member of this Council, when it violates the Universal Declaration of Human Rights. We dream and work for a positive change for all Venezuelans. I ask this Council to demand the liberation of all political prisoners in Venezuela.