"The government of the military regime has denied Cubans the universal right to freedom of travel for more than half a century and continues denying this right without any transparent prospects of change. With the greatest cruelty, it has torn millions of Cuban families apart and it still continues doing it." - Oswaldo Payá Sardiñas Enough of deceptions, FREEDOM NOW, April 19, 2012 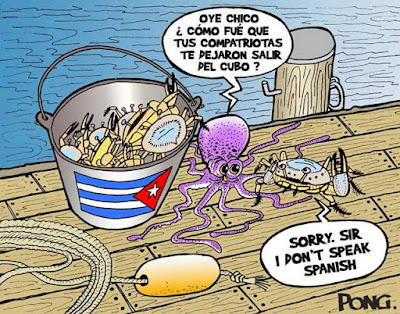 The infamous white card, an exit visa, that Cubans needed to exit their own country was replaced in 2013 with new more stringent requirements for the passport. Travel in and out of Cuba is administered by the Ministry of the Interior and professionals such as medical doctors do not have freedom to travel.

Travel into and out of Cuba remains under totalitarian control and dissenters continue to be punished. The case of Antonio Rodiles and his wife Ailer González who are not being allowed to travel out of the island is a case in point. They have not been charged with anything nor are they on parole, but the dictatorship has decided for the time being that they cannot travel. In the past the Cuban dictatorship used the white card now they use the passport as the control.

Between 70,000 and 300,000 Cubans are banned by the Castro regime from returning to their homeland reported The Miami Herald on August 15, 2011 in an article titled Many Cuban expatriates can't go home again.  A friend, born in Cuba, that I went to college with was not able to travel to Cuba when her grandmother died. It wasn't the US embargo that stopped her but the Castro regime that denied her request. No reason given.

This migration "reform"is an example of what the late dissident leader Oswaldo Payá referred to as "fraudulent change." Giving the image of an opening while the Stalinist character of the dictatorship remains intact thus benefiting it from the image makeover in order to provide decreased international scrutiny and increased legitimacy. Sadly, the reality is very different. Cubans are no freer to travel now than before January 1, 2013  it remains up to the whims of the dictatorship.


Oswaldo knew this first hand having been "permitted" to travel out of Cuba in December 2002 to attend the Sakharov Prize ceremony in Strasbourg, France. Days prior to being granted the white card to travel, on December 13, 2002 his home was trashed and death threats were left everywhere. Oswaldo Payá was able to return home to his family in February of 2003. Dissidents in smaller numbers when politically expedient for the regime were traveling in and out of Cuba long before 2013.

Despite the so-called 2013 travel reform Cubans living abroad were still banned from returning home because they had nonviolently dissented from the official line. One high profile example was that of Blanca Reyes. In August of 2013, Blanca Reyes made public that she was denied the right to enter her country, Cuba, to visit her 93-year old dying father. On October 15, 2013 over twitter Blanca reported that father and daughter were never again to be reunited in life:"My father died today in Cuba. I did not see him for nine years, the Cuban government stopped me. HOW MUCH LONGER MY GOD?"

One concrete change is that the cost for a Cuban national to travel out of Cuba has increased in cost from 300 CUCs ($300) which included in the past the passport, white card and associated paperwork to 500 CUCs ($500) now for just the passport when the average Cuban earns 20 CUCs working for an entire month. This means that under this so-called reform for a Cuban to obtain a passport needs to spend twenty five months salary.

Cuba remains the only country in the Western Hemisphere in which nationals do not have the right to enter and exit their own country. It is for this reason that the Cuban Adjustment Act (CAA) remains needed. The dictatorship in Cuba remains a totalitarian regime. Stories in the media have misrepresented it as some sort of "perk" but that is not the case. However since one of the long term goals of the Castro dictatorship has been to get rid of CAA which sets Cuba apart from the rest of countries in the hemisphere then this type of media campaigns should not be a surprise.

At the same time one cannot ignore that the dictatorship in Cuba is also a state sponsor of terrorism and that a small number of individuals who have engaged in human rights violations and atrocities against Cubans have been rewarded by the Cuban regime with residency in the United States. At the same time the president of the United States has said that those engaged in serious human rights violations should be barred from entering the United States and on August 4, 2011 issued a presidential proclamation to that effect that states under Section 1:


The entry into the United States, as immigrants or non-immigrants, of the following persons is hereby suspended:

Instead of replacing the Cuban Adjustment Act another approach, that underscores Obama's above stated presidential proclamation, would be to push for legislation that bars Cuban human rights abusers from entering the United States. The bill would place visa bans and asset freezes on Cuban officials involved in human rights abuses and could be patterned after the Sergei Magnitsky Rule of Law Accountability Act that was passed in 2012 that targets Russia. In addition to Cuba the new bill could also include Belarus, China, North Korea, Venezuela, Vietnam, and Zimbabwe and be an opportunity for unity between freedom movements.

Maintaining the Cuban Adjustment act as it is while applying the presidential proclamation and pushing for the Magnitsky Act to be expanded to include Cuba to target those who have committed serious human rights violations in Cuba seems an approach that both takes into account the systematic violation of human rights suffered by Cubans and the need to hold Cuban human rights violators accountable. Doing otherwise would be a surrender of fundamental democratic values.