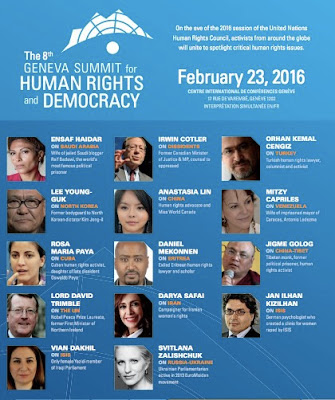 GENEVA, February 22, 2016 -- Covered by major media from around the world, the UN human rights headquarters in Geneva was the site today of a rare gathering of courageous dissidents from Iran, China, Russia, North Korea, and Eritrea, together with family members of famous political prisoners in Saudi Arabia and Venezuela, united for the 8th annual Geneva Summit of Human Rights and Democracy, organized by 25 non-governmental organizations, including UN Watch and Human Rights Foundation.

Today's opening UN session was co-sponsored by the U.S. Canada, and the Czech Republic.

The two-day Geneva Summit, whose main public session takes place tomorrow, features presentations by noted right activists, former political prisoners and victims from human rights hotspots, with the aim of placing key issues on the global agenda days before UN chief Ban Ki-moon and the world's foreign ministers gather to open the 10th anniversary session of the UN Human Rights Council. World political figures and diplomats are also participating. Today's keynote address was delivered by Maria Leissner, Secretary-General of the Community of Democracies. Tomorrow the summit will hear from Anne Brasseur, the outgoing president of the Parliamentary Assembly of the Council of Europe.

For journalists, this week's Geneva Summit provides a one-stop opportunity to hear from and interview frontline human rights advocates, many of whom have personally suffered imprisonment and torture.

The speakers’ compelling and vivid testimonies today have called on UNHRC delegates not to allow politics to override the cries of human rights victims.

Speakers today and tomorrow include:


Now in its eighth year, the annual conferences of the Geneva Summit have enjoyed widespread coverage by CNN, Le Monde, and other major media.

- All sessions will be available via live webcast at www.genevasummit.org