"Two years in prison but free in mind and spirit. Seeing that the hours of the dictatorship are numbered, I know that it has been worth it." -  Leopoldo López, over twitter on February 18, 2016 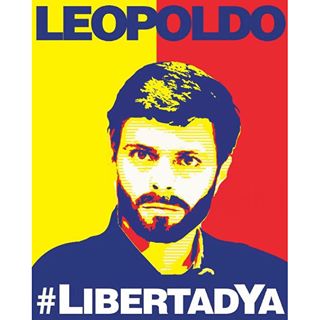 Unjustly imprisoned for two years for advocating for the nonviolent defense of democracy in Venezuela,  Leopoldo López has become from his prison cell the most important political figure in the country. On February 18, 2014 with hundreds of thousands of supporters gathered in Venezuela he turned himself over to the agents of the Maduro regime but not before addressing them and calling on them to maintain nonviolent discipline:


"Well brothers and sisters I ask you to continue in this fight and do not leave the street, to assume our right to protest, but to do it in peace and without violence, I ask that us, all of us that are here, all of the Venezuelans that want a change, to get informed, educated, organized, and to execute non-violent protests, the protests of masses, and the will of souls and hearts that want to change, but without hurting your neighbor. "

Since then he has been subjected to a political show trial in a Venezuela that no longer has an independent judiciary and sentenced to 13 years and nine months in prison. Leopoldo went on hunger strike for 30 days demanding that a date be set for the National Assembly elections. This nonviolent action led to the elections being held on December 6, 2015 and the democratic will of the Venezuelan people being exercised and the opposition taking over the National Assembly.

Today the struggle for a free Venezuela continues and the next step is the freedom of all prisoners of conscience in an amnesty. Looking forward to seeing Leopoldo López reunited with his family in freedom and continuing the nonviolent movement to the restoration of the rule of law in Venezuela.