#AFlowerForPaya: F29 Mass for Oswaldo Payá on what would've been his 64th birthday

"Next February 29th my father would be 64 years old. Our friends and I, in person, will be there,  back in Havana in a thanksgiving mass for his life.  Death is not more powerful than Love. And the legacy of my father Oswaldo Payá and Harold  Cepero is full of love for life in a free Cuba." -Rosa María Payá Acevedo, Geneva Summit for Human Rights and Democracy, February 23, 2016 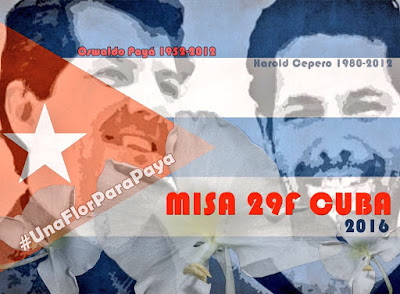 Oswaldo Payá was born 64 years ago on February 29, 1952 and was extrajudicially executed in Cuba on July 22, 2012 along with Harold Cepero. Following these untimely deaths the Cuban opposition leader's family was subjected to death threats and heightened surveillance by state security leading them to go into exile.

However,  Rosa María Payá has refused to go along with this all too common narrative and returned to Cuba on May 13, 2015 to hold a mass for her dad and lay at his grave in Havana. She now returns accompanied by Mexican Federal Deputy Cecilia Romero to hold a mass in Cuba on February 29th in celebration of her father's life.

Rosa María was inviting friends in Cuba to join her on February 29th in a Mass in celebration of her dad's and Harold Cepero's lives at 5:30pm at the Church of  Los Pasionistas in Havana, but now that location has been changed to Cerro parish "El Salvador del Mundo",  located on Santo Tomás y Peñón in Havana, Cuba. She has also reported that her SMS texting service has been arbitrarily blocked.

In Miami a Mass is being held at 8:00pm at the Church of Our Lady of Charity (La Ermita) at 8:00pm in celebration of the lives of  Oswaldo Payá Sardiñas and Harold Cepero Escalante.

All people of good will our invited to pray for the souls of these two good men and celebrate their lives. At the same time through the social media there is an effort underway to highlight this visit with the hashtag #UnaFlorParaPaya (#AFlowerForPaya) to let Cuban officials know that the world is watching.

In one of her final tweets before boarding Rosa made the following observation: "Soon I'll be in our beloved Cuba tragically the only country in the world Cubans don't have rights."