Spies in the Ointment: Downside of going to Cuba to get "A Revolutionary Perspective on Education"

Do participants in "A Revolutionary Perspective on Education" know what they are getting into? 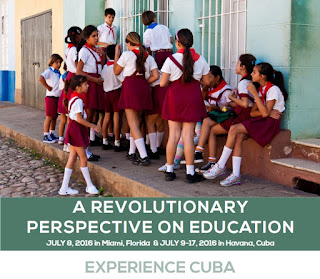 Florida International University and The University of New Mexico are organizing a 9-day trip to Cuba in what they say is a "people to people program" that will "focus on educational practice and philosophy on the island."

"The program kicks off on July 8, 2016 in Miami, Florida, with a one-day educational training session led by FIU Cuban Studies experts." From July 9th until July 17th participants will be introduced to Cuba's totalitarian regime complete with at least two propaganda sessions that portray the dictatorship in a positive light.

This is a Potemkin Village visit to a totalitarian communist dictatorship that has demonstrated its effectiveness in controlling the narrative with visiting groups. To begin to counter this one must read Paul Hollander's Political Pilgrims: Western Intellectuals in Search of the Good Society that studies and catalogs the strategies and tactics that these regimes use, including the Castro regime in Cuba.

Also raising eyebrows on Wednesday, July 13th participants will view a propaganda film “Maestra” on the Castro regime's 1961 literacy campaign in the country side, produced by Catherine Murphy, a collaborator with the late pro-Castro propagandist, Saul Landau. No mention is made of observing the 22nd anniversary of the "13 de Marzo" tugboat sinking on that day.

A day before on July 12, 2016 participants will attend a meeting with the "Cuban Institute of Friendship with the Peoples (ICAP)" that should raise more than eyebrows but alarm. According to counter intelligence expert Chris Simmons the "ICAP’s intelligence collaboration with the Directorate of Intelligence (DI) dates back over three decades. It is not a DI entity per se, but is believed to be roughly 90% DI-affiliated due to a large pool of collaborators who serve the small team of ICAP-embedded DI officers." A past president of the ICAP was indicted for drug smuggling into the United States in 1982. Do participants understand that they may be profiled by Cuban intelligence officers? Will the orientation at Florida International University by Cuban Studies experts provide adequate preparation so that participants are not compromised?

A word of caution to participants that during their stay in Cuba they are at the mercy of the Cuban intelligence service and sadly Florida International University in the past has not been a reliable partner for visiting groups. Psychology professor Carlos Alvarez who was the associate professor for educational leadership and policy studies, and his wife Elsa Alvarez, counselor for the psychological services department  at Florida International University were arrested by the FBI on January 6, 2006. Professor Alvarez conducted trips to Cuba with young professionals in the late 1990s in what was billed a conflict resolution project.  Alvarez was sentenced to five years in prison and his wife to three years in prison on February 28, 2007 for conspiring to act as unregistered Cuban agents.

An overview of the agenda shows that this is an official visit that will provide a false impression to visitors on the real nature of the Cuban educational system under the present regime. Unfortunately, President Barack Obama repeated the same cliches on the Cuban education system that are not backed up by the historical record when he stated during his recent visit to Cuba: "Cuba has an extraordinary resource -- a system of education which values every boy and every girl." Sadly, this is not the case.

First, according to the 1953 Cuba census, out of 4,376,529 inhabitants 10 years of age or older 23.6% were illiterate, a percentage lower than all other Latin American countries except Argentina (13.6%), Chile (19.6%), and Costa Rica (20.6%). Factoring only the population 15 years of age or older, the rate is lowered to 22.1%”  Other countries in Latin America were able to achieve similar literacy rates to those claimed by the Castro regime without sacrificing civil liberties. (1)

The Slovak-based People in Peril conducted a study between 2005 and 2006 that generated a 77 page analysis, What is the future of education in Cuba?, gathers criticism,  suggestions and proposals for a future educational reform. According to Eliska Slavikova in an interview with El Nuevo Herald on October 23, 2007 observed ''Cuban education is destroyed, with grave problems like the deterioration of the schools, the predominance of ideology over teaching  and the bad preparation of teachers.'' The study made the following findings:


• There's been a ''pronounced'' departure of teachers to other jobs because of low salaries and the lack of social recognition.
• Many teachers also left their jobs because of the government's growing ideological pressures. The primary objective of education is the formation of future revolutionary communists.
• The great majority of schools lack the equipment and installations needed to provide a good education.
• High school graduates have been put to teach after only an eight-month special course. But much of the teaching now is done through educational TV channels.

More recent analyses of the Cuban educational system in 2014 and 2015 arrive at the same conclusions on lack of quality, resources and continued politicization of the curriculum.  One wonders if the participants of "A Revolutionary Perspective on Education" will be able to get an accurate perspective on the education system in Cuba or will just repeat the same platitudes as President Obama that are divorced from the reality experienced by the average Cuban child.