Why is the United States denying Cuba Democracy activist's residency application after 14 years?

"To us it is suspicious, that in the midst of this and after so many years, we suddenly get this letter and we're concerned whether they're doing this to try to prevent us from exercising free speech with the flotillas in Cuba." - Ramon Saul Sanchez, reaction to NBC6 upon receiving letter denying his application for residency in the United States and asking him to leave the country.

Ramon Saul Sanchez applied for permanent residency status in 2002. On the eve of a flotilla in solidarity for 88 Cuban political prisoners with the objective of setting off fireworks, one for each of them, and visible from Havana, Cuba he received a letter from the Miami office of the Department of Homeland Security denying his residency and telling him to leave the United States immediately. He is right to be suspicious of the timing of this letter.

I just received a decision from the US Government that I have to leave the US. It came with a denial of residency applied for in 2002
— Ramon Saul Sanchez (@saulsanchez) April 15, 2016


Last night on Roberto R. Tejera's program Prohibido Callarse (Forbidden to be Silent) Ramon Saul Sanchez was interviewed along with his attorneys. A copy of the envelope in which the letter arrived was handwritten and his name misspelled was shown on air. In addition it was revealed by Roberto Tejera that the Miami office of Homeland Security just last week met with functionaries of the Castro regime's Ministry of the Interior in negotiations of which the content are unknown.

Ramon Saul Sanchez is a Cuban exile who fled Cuba in the Freedom Flights of 1967 with his family when he was just 12 years old. He has carried out a life long struggle against the Cuban dictatorship, and the entire time that I've known him he has been a practitioner of nonviolence collaborating with the Florida Martin Luther King Institute of Nonviolence.

I've known Ramon Saul Sanchez for over twenty years and consider him a friend. We take different positions in the US - Cuba policy debate, but we do agree on a fundamental level that change in Cuba can best be achieved through nonviolent means. This past week in the radio program Valores Humanos (Human Values) we discussed, in Spanish, the principles and applicability of nonviolence within the Cuba context.

Ramon Saul's reaction to President Obama's December 17, 2014 Cuban policy announcement was that it was an opportunity and that he would keep an open mind. My own view on that day was and remains that: "Regime hardliners have won, thanks to the Obama Administration's actions today. Kidnapping an American and holding him for ransom for five years has paid off.  Moderate elements within the dictatorship, seeking to transition Cuba into a responsible member of the family of nations, will have to continue to remain silent and wait."

Never thought that moderate elements in the diaspora would also be targeted under this new Cuba policy in an effort to silence them, leaving only administration apologists and corporate interests to repeat talking points.

If this is the beginning of a trend to intimidate and silence dissenting voices, even those that defend much of Obama's Cuba policy but are independent, then the hollowness and mendacity of the claim that this policy is about empowering Cubans will be made more evident.

This also underscores the need for keeping the Cuban Adjustment Act.

In the mean time friends of freedom should be watching closely what happens later today in Marathon Key, Florida when the Democracy Movement attempts to exercise it's first amendment rights to free speech and assembly with their flotilla. 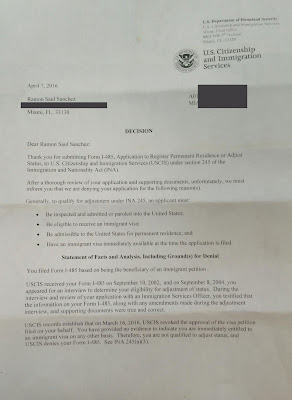