Captive Nations Week and the 4 Ingredients for Real Freedom

Captive Nations Week is the third week of July 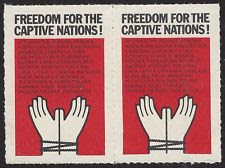 In 1959 President Dwight D. Eisenhower signed Public Law 86-90 which compels every President of the United States to proclaim the third week of July of each year as Captive Nations Week in commemoration of the "captive nations" (those still with Communist governments). In 2016 there are five openly communist dictatorships in the world: China, Cuba, Laos, North Korea, and Vietnam. 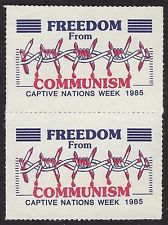 Due to the normalization of diplomatic relations last year with the Communist regime in Cuba and the official visit by President Obama and his family earlier this year that Captive Nations Week will focus this year on Cuba and the continuing need for freedom. The Victims of Communism Foundation outlines with a cool presentation titled "Cuba Libre?" what are the four ingredients of a real free Cuba. 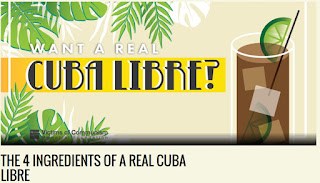 More often than not the words “Cuba Libre” bring to mind that combination of good quality rum, Coke, and lime that refreshes in an almost medicinal way, especially on a hot and humid summer day. When we at VOC hear “Cuba Libre,” however, our thoughts turn to the Cuban people and their dreams of freedom, peace, and prosperity. A real “Cuba Libre” requires four crucial ingredients.


First, the rule of law. The communist dictatorship of the Castros is capricious, with Cubans (such as the Ladies in White and street artist El Sexto) subject to repeated and arbitrary detention. Furthermore, Cuban courts are subordinated to the executive and legislative branches (i.e., to Castro and the Communist Party), thereby denying them independence. The only rule in Cuba is that there is no rule beyond the will of Raúl. It is truly the rule of man over men.

What is desperately needed in Cuba is the rule of men under law. In other words, Cuba requires a government that is administered according to a publicly declared set of rules applied in an equal manner to all people regardless of the will of those making the decisions. One of the surest safeguards of the rule of law is an independent judiciary where the decisions of the courts in the particular cases before them are binding upon the executive and legislative branches.

Second, democratic self-governance. The Cuban regime represents not the interests of the Cuban people, but rather those of the Cuban Communist Party, and of its leader Raúl Castro in particular. One need only look at the example of Sirley Ávila León, a rural Cuban farmer turned community activist, to see this truth. Between 2005 to 2013, she was elected three times by her community as an unpaid delegate to an official legislative body. When she tried to fulfil the representative role she supposedly held and protest the lack of adequate schools in her district, eventually sharing her story on Radio Martí, she was labeled a mercenary, setting off a string of harassment and severe vandalism that culminated in May 2015 when she was brutally attacked with a machete.

One of the causes of the American Revolution was the denial of the right to petition the government for the redress of grievances, the right to ask the government to act in the interests of those whose persons and property it exists to protect. As Ms. Ávila’s example shows, Cubans enjoy no such right. They are punished simply for asking that the state fulfill its most basic duties. Until the Cuban people have a say in how they are governed, their interests will continue to count for nothing.

Third, free speech. Not only are Cubans prevented from speaking up to ask the Castro regime to improve their lives, but they are prohibited from speaking openly about matters of public interest at all. Dissidents are detained, arrested, or placed under house arrest before and during major meetings, like the Community of Latin American and Caribbean States (CELAC) summit in January 2014. Private media ownership is prohibited. Plays are subject to regime approval before they can be performed, and some, like “The King is Dying,” by Juan Carlos Cremata, are banned.

Without free speech, the intellectual, cultural, and political life of the Cuban people will remain constrained. A robust civic spirit and an empowered citizenry require a public sphere where individuals can come together to clearly identify and openly discuss the most pressing issues of the day. Free speech is foundational to a genuinely representative government, as the limits enforced upon speech will always favor the interests of those who enforce the limits.

Fourth, free enterprise. The Cuban economy is centrally planned and dominated by state owned enterprises. Moreover, the most significant of these enterprises are under the control of the Cuban regime’s security apparatus and thus report directly to Raúl Castro. Any investment in Cuba requires government approval, and typically requires that the investor partner with the state. The government controls prices and allocates food rations to the people. Moreover, as Julio Shiling notes, “The regime has enormous businesses outside the territory of Cuba which have siphoned money away from the Cuban people.”

A system of free enterprise unleashes the creative potential of individuals. These individuals come together voluntarily to cooperate to meet the needs and wants of their fellows. Unlike a planned economy—where associations are compulsory and coercive and the kind, quality, and quantity of products and services produced are decided upon by those with political power—a system of free enterprise responds to human beings. Rather than shaping them, it is shaped by them.
Taken together, these four elements are the necessary ingredients to for a real Cuba Libre. It is our hope that, Cuba Libre raised in hand, we will one day soon toast Cuba’s freedom.

In Washington D.C.at the Heritage Foundation on July 13th the Victims of Communism Memorial Foundation held the 2016 National Captive Nations Week Luncheon with Lee Edwards, Marion Smith and Michael Ryan presiding over the event. In addition country reports were made of the five remaining communist regimes in the world: China, Cuba, Laos, North Korea, Vietnam.

On Tuesday, July 19, 2016 from 6:30 PM at The Landmark Theater E Street - 555 11th St NW , Washington, DC will premiere the documentary HAVANA MOTOR CLUB  whose subject matter is Cuba's vibrant community of underground drag racers and their quest to hold Cuba's first official car race since they being outlawed by the Castro Regime in the early days of the revolution in Cuba.

After the premiere of the documentary the Victims of Communism Foundation is also delighted to be premiering their third addition to the Witness Project series. This 5 minute short features Sirley Ávila León, a courageous champion of human rights who was brutally attacked in her native Cuba and lived to not only tell her story but continue her fight for freedom on behalf of Cubans.

Get your tickets here while they are still available. Seats are limited.
Posted by John Suarez at 3:54 PM