Today, July 22, 2016 marks four years since Oswaldo Payá Sardiñas, and Harold Cepero Escalante were killed in Cuba under suspicious circumstances that have led to demands for an international investigation, a report that points to the involvement of state security, and survivor testimony that points to murder. Today family, friends and admirers will celebrate their lives while praying for them as we continue to mourn their passing. The Christian Liberation Movement a month ago requested those who knew the two men to write an article or chronicle about them.


Although I have been blessed to meet Oswaldo's and Harold's friends and family members over the years, fate did not allow me to meet them but on a couple of occasions speak with them over the phone. Nevertheless the words and actions of Oswaldo Payá Sardiñas, founding leader of the Christian Liberation Movement captured my imagination and admiration when I first heard of him in 1990. The Christian Liberation Movement's nonviolent vision of change is a radical rejection of the violence and hatred that define the ideology and political vision embraced by the Castro brothers and the dictatorship's iconic figure Ernesto "Che" Guevara. The violence visited on Werlando Leyva Batista, a 30 year old member of the Christian Liberation Movement in Holguin, Cuba attacked with multiple machete blows by one of the Castro regime's paramilitary on June 8, 2013 has been part of a pattern of worsening violence by the dictatorship that continues to be defied nonviolently.

In remembering both martyred activists the words of Oswaldo Payá Sardiñas, and Harold Cepero Escalante must be remembered and their nonviolent legacy and example shared with others.


"How close you and "Solidarity" have been to us in these years. Receive our fraternal greetings. I write on behalf of the Christian "Liberation" Movement. We are a Christian and patriotic movement that by peaceful means are working for freedom and democracy in our nation. ... I hope this gets to you and that the Poles might know of our struggle inspired by the Gospel. I cannot conclude without expressing our gratitude to you, the Movement "Solidarity" and all the Polish people that knew how to open the path of freedom for subject peoples. As Catholics we feel that we are in communion with you and that overcomes the difficulties of communication." - Oswaldo Payá, October 1, 1990

"A few days ago, bombs exploded in two hotels in Havana. Neither the perpetrators nor the objectives of these terrorist acts have identified themselves. But in any case, such acts are reprehensible. We reject them and they should not serve to confuse Cubans. When defending their human rights, proclaiming the truth and proposing a peaceful transition to democracy, many of our fellow countrymen have endured threats, discrimination, acts of harassment, arbitrary incarcerations, beatings and cruel treatment by repressive agents, and political and judicial authorities. However, neither we nor any of our brothers have renounced a peaceful transition through civic means." - Oswaldo Payá Sardiñas, July 22, 1997

"Furthermore, those who in the prisons receive serious mistreatment have not voiced words of hatred against their abusers, because for us the peaceful approach is not a tactic but something that arises out of a spirit of reconciliation and liberation which has prompted us to begin our struggle. No one can justify terroristic violence and attacks on defenseless human beings with any kind of reasoning, and much less by pretending to defend freedom and justice. Anyone who hides cynically to make attempts against human life violates the dignity of the human being and conspires against freedom and justice. The end does not justify the means. Lies and terror lead to death and fear. Truth and love produce freedom and life." - Oswaldo Payá Sardiñas, July 22, 1997

"Expelling us is not the solution neither for them or for us, it would be better to ask yourself why are there young people who are filled with concern and worry for the welfare of the country. It would be good that they explain to the students and to the people what the Varela Project is, what does it ask, and so give everyone the right to think and choose." -  Harold Cepero Escalante, November 3, 2002

"Today we are kicked out of the university for this. Tomorrow it could be one of you for just being different, for permitting yourself to think." -  Harold Cepero Escalante, November 3, 2002

"They are wanting to perpetuate something that it is not even known if it is fair, and in this manner they are denying the progress of a society that wants something new, something that really guarantees a dignified place for every Cuban. They are pressuring people or preventing them from expressing their true feelings, they are cultivating fear in the nation." -  Harold Cepero Escalante, November 3, 2002

"Under the pretext of defending freedom they are attacking it. Martí would say it like this: "The knife that is stabbed in the name of freedom is plunged into the chest of freedom". They should think if at the bottom of this attitude there is a real respect for freedom, because to say freedom, to be free, is not to snatch the freedom of others. I therefore ask that before they expel us ask themselves how long can they keep silent the mourning and the reality of Cuba, and remind them that the damage they can do to us is damage that they do to themselves. And more: it is a direct threat to every Cuban." -  Harold Cepero Escalante, November 3, 2002

"Those who steal the rights of others steal from themselves. Those who remove and crush freedom are the true slaves." -  Harold Cepero Escalante, November 3, 2002

"The cause of human rights is a single cause, just as the people of the world are a single people. The talk today is of globalization, but we must state that unless there is global solidarity, not only human rights but also the right to remain human will be jeopardized." - Oswaldo Paya, December 17, 2002


"The first victory we can claim is that our hearts are free of hatred. Hence we say to those who persecute us and who try to dominate us: ‘You are my brother. I do not hate you, but you are not going to dominate me by fear. I do not wish to impose my truth, nor do I wish you to impose yours on me. We are going to seek the truth together’." - Oswaldo Paya, December 17, 2002


"We now know that any method or model which purportedly aims to achieve justice, development, and efficiency but takes precedence over the individual or cancels out any of the fundamental rights leads to a form of oppression and to exclusion and is calamitous for the people." - Oswaldo Paya, December 17, 2002

"We wish to express our solidarity with all those who suffer from any form of oppression and injustice, and with those in the world who have been silenced or marginalized." - Oswaldo Paya, December 17, 2002

"It's obviously a matter of shame that our land is being used for that purpose, having foreign prisoners brought to Cuba. Even if they are terrorists they deserve respect. Their human rights should be respected." - Oswaldo Paya, December 18, 2002 (on arrival of Taliban prisoners to Guantanamo )

"It's difficult to say exactly what the offences are but it can be just for being critical of Fidel Castro. More than 20 leaders of our movement [the Christian Liberation Movement] are in prison and many other activists from other movements. The repression against the Varela Project [named after Felix Varela, a nineteenth-century Cuban independence advocate] is because they understood that people had lost their fear so we became a symbol of hope." - Oswaldo Payá, August 4, 2006


"Many Cubans see powerful things in this regime or are concerned that they will be trapped. The solution cannot be a violent one because that will only bring more violence."  - Oswaldo Payá, August 4, 2006

"I have been told that I am going to be killed before the regime is over but I am not going to run away."- Oswaldo Payá, August 4, 2006

"We thank all those heroes who on one day were abducted from their homes unjustly imprisoned solely for defending human rights. The people of Cuba and all who love justice must be grateful to those Cubans who have been symbols of dignity and hope shining from the shadows."  - Oswaldo Paya, October 7, 2010

There is a real “moral inversion,” in what the foreign media, intellectual circles, ecclesiastical circles, diplomats and politicians are doing against the people of Cuba and against the dissident right now. They judge the persecuted, the poor, those who are silenced, but they do not dare to judge the government. - Oswaldo Paya, October 3, 2011

Our Movement denounces the regime's attempt to impose a fraudulent change, i.e. change without rights and the inclusion of many interests in this change that sidesteps democracy and the sovereignty of the people of Cuba. The attempt to link the Diaspora in this fraudulent change is to make victims participate in their own oppression.  - Oswaldo Payá, March 30, 2012

“Already many Cubans have discovered and soon all of them will discover that this oppression, that this imposed lie, can be overcome recognizing ourselves as brothers to conquer our rights peacefully. So there is hope.” - Oswaldo Payá Sardiñas,  Somos Liberación Havana, Cuba, July  2012.

The extrajudicial killings of Oswaldo Payá Sardiñas and Harold Cepero Escalante on July 22, 2012 was not only the murder of two good men but the Castro regime's attempt to murder the future of a free and democratic Cuba. Today is a day that all friends of freedom should say a prayer for these two activists, their friends, families, and for Cubans in general. Tonight at 8:00pm at Our Lady of Charity (Ermita de la Caridad) located at 3609 South Miami Ave Miami, FL. 33133 a Mass to give thanks for the lives of Oswaldo Payá Sardiñas and Harold Cepero Escalante who sacrificed so much for Cuba's freedom will be held. 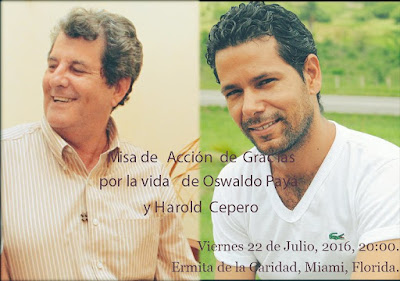