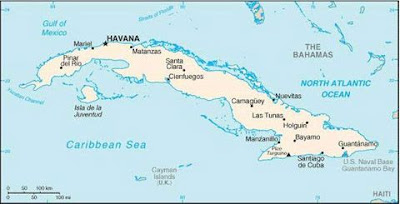 Cuba is a captive nation that since 1959 has been subjected to a communist dictatorship run by the Castro family. 11 million souls there have had their lives coarsened by a totalitarian regime that continues to systematically violate the human rights of each and every Cuban in 2016.  President Obama's new Cuba policy and official visit to the island has coincided with a worsening human rights situation, collapsing trade, and foreign policy embarrassments involving missile technology, new cooperation agreements with North Korea, and Cuban military presence in Venezuela.

Human Rights
In the first six months of 2016 there were 6,573 politically motivated arrests in Cuba documented by the Cuban Commission of Human Rights and National Reconciliation. The average number of arrests per month so far in 2016 is 1,012 which exceed the previous average high of 741 per month set in 2014, by 271 more monthly detentions of non-violent Cuban pro-democracy activists. This has also coincided with an intensification of attacks against human rights defenders in April and May of 2016 that was noted by The Observatory for the Protection of Human Rights Defenders, a joint program of the World Organization Against Torture and The International Federation of Human Rights. Among the more brutal attacks during this period was the May 8, 2016 savage beating in Holguín, Cuba of Rosa Escalona, member of “The Ladies in White”, a human rights group in Cuba, along with her husband and three sons who suffered great bodily injury. Rosa's husband Alberto Pedro Freire Leiva was the most critically injured with a ruptured spleen and massive internal bleeding requiring surgery. Her 25 year old son's skull was also fractured. The attack is part of a rising wave of violence by the regime against members of the opposition. 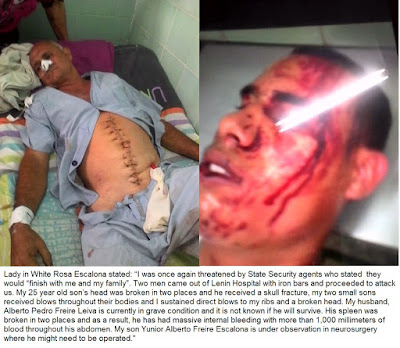 U.S. Cuba Policy
Under the Obama administration's outreach to the Castro regime and normalized relations trade between the two nations dropped from $711.5 million peak in 2008 under the Bush administration with sanctions that protected U.S. taxpayers from picking up the tab to 2015 under the Obama administration when trade dropped to $180.3 million in 2015 and so far in 2016 looks to be still lower.  Under the old policy that President Obama has abandoned, American companies made over $5.2 billion while other countries had to forgive billions in debts owed to them by the regime in Cuba. This means that taxpayers in those countries ended up picking the tab. If Obama succeeds in ending the embargo then the trade in goods with Cuba will descend into negative territory with businesses not getting paid by the Castro regime. Instead businesses will get their money back through taxpayer bailouts. This is why the Chamber of Commerce is lobbying so hard for credits in Congress.

Cubans fleeing the island by the tens of thousands
Between January 2014 and February 24, 2016 U.S. Customs and Border protection documented 93,237 visa less Cubans had entered the United States. In the midst of this crisis Cuba's communist authorities said that from December 7, 2015 doctors would again be required to ask permission to travel abroad for private reasons.

U.S. Military technology mysteriously ends up in Cuba
The Castro regime got a hold of a U.S. Hellfire missile in 2014 and refused to return it to the United States for almost two years, despite ongoing secret negotiations for most of that time, until the media broke the story raising ominous questions about U.S. national security and the Castro regime.

Military cooperation and intelligence sharing with North Korea
In March 2016, the month that President Obama visited Cuba, the Castro regime signed a confidential military cooperation and intelligence-sharing agreement with North Korea reported the Paris based publication Intelligence Online. The Cuban dictatorship, under Raul Castro, has had extensive relations with the Hermit Kingdom that has included violating international sanctions to smuggle tons of weapons in 2013.

Venezuela
On May 15, 2016 Henry Ramos Allup, the head of the National Assembly of Venezuela was complaining over social media of the leadership role played by a Cuban general and 60 Cuban officers over the Venezuelan military to maintain Maduro in power and continue exploiting Venezuela's natural resources. Despite this long time reality Secretary of State John Kerry in August of 2015 said "the United States and Cuba are talking about ways to solve the Venezuelan crisis." The Obama administration's view that the Castro regime can be a partner in resolving the crisis in Venezuela is deeply flawed.

Today, July 13th marks the 22nd anniversary of a massacre of 37 Cuban men, women and children by Castro agents when they tried to flee the communist dictatorship in Cuba. Earlier this year on February 24th friends and families observed the 20 year anniversary of the Brothers to the Rescue shoot down where 3 U.S. citizens and one resident were murdered when their two planes were pulverized on Castro's orders by Cuban warplanes.  Both these crimes took place when a previous administration sought to normalize relations with the Castro regime. 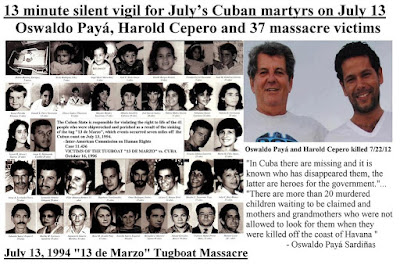 Four years ago on July 22, 2012 while the Obama administration was outreaching to the Castro regime Cuban opposition leaders Oswaldo Payá Sardiñas, and Harold Cepero Escalante were murdered in what has all the hallmarks of an extrajudicial execution engineered by state security. Let us remember the victims of the regime murdered during U.S. engagement with the Castro regime and avoid killing them a second time by forgetting them.

Raul Castro and other regime officials have announced a new special period of austerity due to the crisis of its client state Venezuela. This is not the first special period. Not surprisingly the first one took place during the Clinton Administration's efforts at normalizing relations in the 1990s following the collapse of the Soviet Union and the 1994 rafter exodus ensued. This announcement by the regime is an exercise in extortion: open up credits that will cost U.S. taxpayers billions or expect another massive exodus. The dictatorship in Cuba know that the Obama administration will not treat a mass exodus of Cubans as a security threat. History has demonstrated that it is under Democratic administrations seeking normalization of relations with the Castro regime that this has taken place: Carter (1980), Clinton (1994) and now under Obama (2014).
Posted by John Suarez at 2:35 AM