“We must say here what is a known truth, which we have always expressed before the world: firing squad executions, yes, we have executed; we are executing and we will continue to execute as long as is necessary. Our struggle is a struggle to the death." - Ernesto "Che" Guevara, UN General Assembly, 1964

Reading two press releases released by prestigious international human rights organizations on November 26, 2016 analyzing Fidel Castro's record on human rights in Cuba some glaring omissions are found in both that ignore some of the most grievous human rights violations committed by the Castro regime over the past 57 years.


Some of what was omitted
Amnesty International released a press release titled "Fidel Castro: A progressive but deeply flawed leader" and Human Rights Watch released one that read "Cuba: Fidel Castro’s Record of Repression Misguided US Embargo Provided Pretext for Abuse". Both Human Rights Watch and Amnesty International address the lack of freedom of expression, harassment, intimidation and possible prison for speaking out against the Castro government but also go out of their way to praise the dictatorship with claims that are at best questionable.

However there is no mention in either report of the political show trials that fell short of international standards that sent thousands of Cubans before firing squads or that this method of execution would continue until at least 2003. Amnesty mentions that Fidel Castro's provisional government carried out "hundreds of summary executions" in 1959 but doesn't mention that thousands more followed. There is no mention of how prisoners in the 1960s had their blood extracted prior to being placed before the firing squad.  Nor is their mention that family members of the condemned had to donate blood to see their loved ones. This practice was documented by the Inter-American Commission on Human Rights in its 1967 Country Report on Cuba. 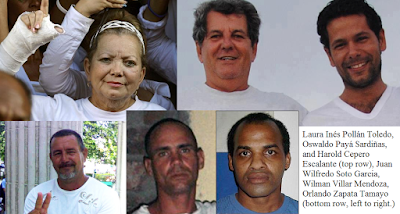 There is no mention of the extrajudicial execution of opposition leaders with Oswaldo Payá Sardiñas, and Harold Cepero Escalante on July 22, 2012 being two high profile examples. There is no mention of the methods of torture used by the regime against prisoners of conscience including the denial of medical care. Nor the games played by the Castro regime to invite the UN Special Rapporteur on Torture in order to get positive media coverage but then not follow through. This is a curious oversight because in the past Amnesty International has reported on these practices. There is no mention of the massacre of refugees by agents of the Castro regime for the sole crime of trying to flee Cuba although Amnesty International had reported on it in the past.

When nuance crosses the line
Amnesty International made no mention of the "abysmal prisons" as Human Rights Watch did but their Americas Director, Erika Guevara-Rosa praised the departed leader while recognizing some of his flaws as follows:

"There are few more polarising political figures than Fidel Castro, a progressive but deeply flawed leader. Access to public services such as health and education for Cubans were substantially improved by the Cuban revolution and for this, his leadership must be applauded. However, despite these achievements in areas of social policy, Fidel Castro’s 49-year reign was characterised by a ruthless suppression of freedom of expression. The state of freedom of expression in Cuba, where activists continue to face arrest and harassment for speaking out against the government, is Fidel Castro’s darkest legacy. Fidel Castro’s legacy is a tale of two worlds. The question now is what human rights will look like in a future Cuba. The lives of many depend on it.”

Guevara-Rosa also mentioned "an unprecedented drive to improve literacy rates across the country" and described this as an improvement in human rights in Cuba. This ignores that Cuba had the fourth lowest illiteracy rate in Latin America in 1953 with an illiteracy rate that was 23.6%. Costa Rica's at the time was 20.6%, Chile's was 19.6%. and Argentina's was the lowest at 13.6%.  She praises the improvement in literacy as if it were something exceptional but much of the rest of Latin America would show similar or greater gains without sacrificing civil liberties as can be seen in the table below. 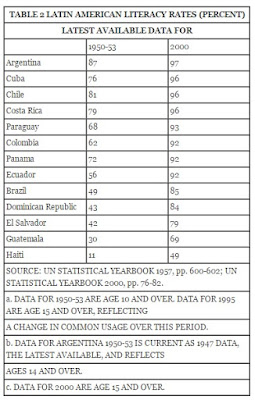 The decline of Cuba's education system on Fidel Castro's watch
There are also great concerns about the Cuban educational system. First the issue of a system of education being transformed by the Castro dictatorship into a system of indoctrination and secondly following the collapse of Soviet subsidies the material decline of the entire system along with shortages of teachers.
The Slovak-based People in Peril conducted a study between 2005 and 2006 that generated a 77 page analysis, What is the future of education in Cuba?, gathers criticism,  suggestions and proposals for a future educational reform. According to Eliska Slavikova in an interview with El Nuevo Herald on October 23, 2007 observed ''Cuban education is destroyed, with grave problems like the deterioration of the schools, the predominance of ideology over teaching  and the bad preparation of teachers.'' The study made the following findings:

• There's been a ''pronounced'' departure of teachers to other jobs because of low salaries and the lack of social recognition.
• Many teachers also left their jobs because of the government's growing ideological pressures. The primary objective of education is the formation of future revolutionary communists.
• The great majority of schools lack the equipment and installations needed to provide a good education.
• High school graduates have been put to teach after only an eight-month special course. But much of the teaching now is done through educational TV channels.

More recent analyses of the Cuban educational system in 2014 and 2015 arrive at the same conclusions on lack of quality, resources and continued politicization of the curriculum.

The Castro regime's healthcare claims and the dismal reality today
Totalitarian regimes often times make outlandish claims of great successes in particular areas in order to justify or rationalize repression and political terror elsewhere. It is true of North Korea and it is also true of Cuba. The only difference being that Cuba has a much more effective propaganda apparatus than their counterparts in Pyongyang and they have invested heavily in their education and healthcare claims.
Katherine Hirschfeld, an anthropologist, who wrote the book:  Health, Politics, and Revolution in Cuba Since 1898 described in it how her idealistic preconceptions about the Cuban healthcare system were dashed by 'discrepancies between rhetoric and reality,' she observed a repressive, bureaucratized and secretive system, long on 'militarization' and short on patients' rights. There is a health care system in Cuba which is decent for regime elites in good favor and tourists with hard currency and another one for everyday Cubans that is a disaster. With regards to the public health system the priority is the good image of the dictatorship not the well being of Cubans or visitors.


However Amnesty International should already have an institutional memory with regards to Cuba. In 1997 when a Dengue epidemic broke out in Cuba the dictatorship tried to cover it up. When a courageous doctor spoke out he was locked up on June 25, 1997 and later sentenced to 8 years in prison. Amnesty International recognized Dr. Desi Mendoza Rivero as a prisoner of conscience. He was released from prison under condition he go into exile in December of 1998. The regime eventually had to recognize that there had been a dengue epidemic. The same pattern repeated itself in 2012 with a cholera outbreak, but this time it was an independent journalist jailed for breaking the story on mishandling of medical aide by Cuban officials. Calixto Ramón Martínez Arias was recognized by Amnesty International as a prisoner of conscience and the organization described how:

"He had been investigating allegations that medicine provided by the World Health Organization to fight the cholera outbreak (which began in mid-2012) was being kept at the airport instead of being distributed. Since then, he has been detained in various detention centres. He has been held at Combinado del Este prison since November 2012."

If you have to lock up journalists and doctors to cover up problems in your healthcare system then its probably not a great healthcare system and outsiders should be a little more skeptical with official claims.
Human Rights Watch also cites as evidence that the Castro regime has achieved much in social, economic and cultural rights that UNESCO had concluded that there was "near-universal literacy"in Cuba, but one should also recall that this UN body is terribly politicized. For example on June 18, 2013 UNESCO added “The Life and Works of Che Guevara” to the World Registrar. UNESCO is providing funds to preserve Che Guevara’s papers. Guevara in addition to promoting communist ideology, is best known as an advocate for guerrilla warfare who viewed terrorism as a legitimate method of struggle against an enemy.
The Embargo: Otherwise known as "the elephant in the room"
The firing squads in 1959 had nothing to do with the Embargo because it did not yet exist nor with U.S. subversion because the Eisenhower Administration quickly recognized Castro's provisional government and hoped for normal relations. The repression was a classic tool to impose revolutionary terror and prepare the population for a communist dictatorship while wiping out all resistance and dissent in order to install a totalitarian regime and then export it to other countries.
Following the failures to overthrow the Castro dictatorship that Human Rights Watch quickly outlined and the dangerous nuclear confrontation in October of 1962 with the Cuban Missile Crisis the decision was made to push for a policy of isolation and making it more expensive for the Castro regime to export its revolutionary project to other countries, and it did work.
However the Carter Administration's dismantling of sanctions and opening of Interests Sections in Havana and Washington DC ended the political isolation and the Castro regime was able to project itself more successfully in Latin America. The end result was the Sandinista regime taking power in 1979. Ronald Reagan enters the White House in 1981 rolling back the Carter policy changes and isolation was able to reassert itself.
The Clinton Administration in the 1990s sought a rapprochement with the Castro regime believing that with the collapse of the Soviet Union the regime's days were numbered and by 1999 Castro ally Hugo Chavez was taking power in Venezuela and the Cuban dictatorship had a new lease on life. In 2000 despite a horrid number of human rights atrocities committed by the Castro regime Bill Clinton shook hands with Fidel Castro and a short while later opened cash and carry trade between US companies and the Castro regime. Now Obama has taken things further and the human rights situation, predictably has deteriorated and the dictatorship gotten more aggressive. Once again the tide is going out for democracy in Latin America.
Furthermore, as Venezuela has demonstrated, getting rid of economic sanctions in Cuba will only mean a change in language to defend maintaining the totalitarian nature of the regime intact by whatever means necessary.